This article aims to provide an overview of the main concepts of descriptive statistics, which are a fundamental part of data analysis and a prerequisite for the understanding of further statistical evaluations, including inferential statistics. The principal aim of descriptive statistics is to summarise the data, and thus to present the numerical procedures and graphical techniques used to organise and describe the characteristics of a given sample.

The choice of descriptive statistics, and also of statistical analysis, largely depends on the nature of the data being examined. Familiarity with the concepts regarding types of data and data distributions is therefore required for further understanding of statistical concepts. 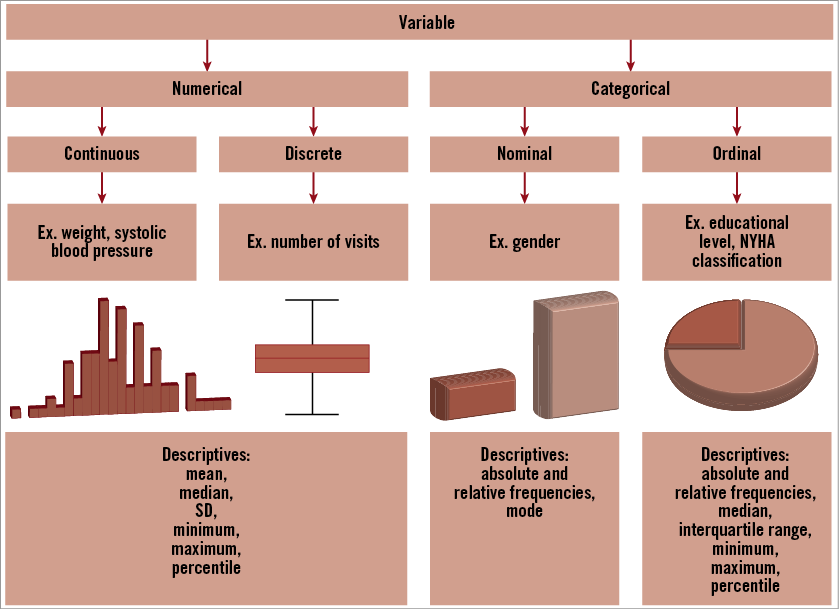 Numerical data can be presented in a graphical way in the form of box plots and histograms. Box plots offer a visual impression of the position of the median (central value), the first and third quartiles (25th and 75th percentile) and minimum and maximum (Figure 2). The box represents the interquartile range (IQR) which includes 50% of the values of distribution. The upper boundary of the box locates the 75th percentile of the data while the lower boundary indicates the 25th percentile. A box with a greater IQR indicates greater scatter of the values. The line in the box indicates the “median” of the data. The “whiskers” of the box plot are the vertical lines of the plot extending from the box, and indicate the minimum and maximum values in the dataset unless outliers are present. 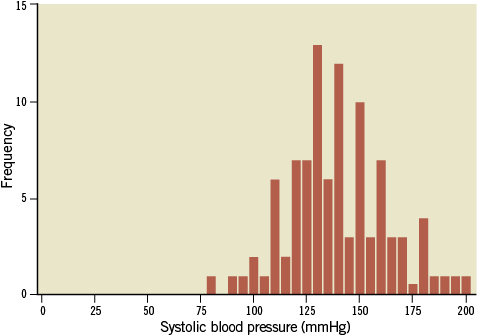 The distribution of continuous variables can be numerically described with measures of central tendency (mean, median and mode) which provide information about the centre of a distribution of values and with measures of dispersion (minimum, maximum, quartiles, and standard deviation) which provide information about the variability of data around the measures of central tendency (Figure 5)3. The arithmetic mean is the average of all values and is calculated by summing all the values and dividing the sum by the number of values. The median is the value that divides the distribution in half, i.e., if the observations are arranged in increasing order, the median is the middle observation. If there is an even number of observations, the average of the two middle ordered values is taken. The mode is defined as the value that appears most often of all observations. Which measures are used to describe a continuous variable depends largely on the distribution of the data. If a variable is symmetrically distributed, e.g., in the case of normal distribution, then the mean, median and mode will be equal (Figure 4). To summarise a variable, it is usually recommended that, when a variable follows a normal distribution, the mean and standard deviation (SD) should be reported (Figure 5). The standard deviation is calculated by taking the square root of the average of the squared differences of the values from their average value. It shows how much variation or dispersion from the average exists. In a normal distribution approximately 95% of cases will have a score within two standard deviations of the mean. If the distribution of values is not symmetrical but skewed, the distribution is characterised by a separation of the mean, median and mode. Using the mean may be unrepresentative of the “mass” of the data in this case. An important feature of the median is that it is not sensitive to outliers and atypical observations. When data are skewed or when their distribution is normal but outliers are present, it is recommended to report the median and interquartile range (e.g., 25th and 75th percentile). 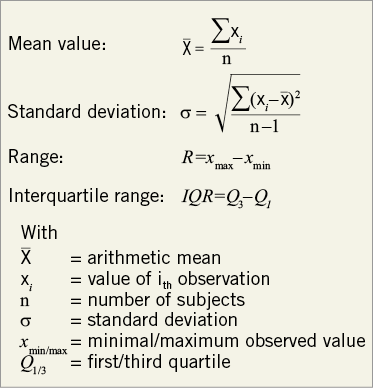 A useful first step in summarising categorical data is to generate frequency statistics2,3. These include absolute frequencies (counts), relative frequencies (proportions and percentages of the total observations) and cumulative frequencies for successive categories of ordinal data. For nominal data the measure of dispersion is based on the frequency of cases in each category. The measure of central tendency for nominal data is the category with the most frequent number of cases, i.e., the mode. The measures of dispersion for ordinal level data are the frequency distribution, percentile and range. As ordinal data are ordered hierarchically, all cases can be sorted from the lowest to the highest score (rank-ordered distribution) and presented with the median.

The bar chart and pie chart are popular graphical presentations for the distribution of categorical variables (Figure 1). The number of segments in one pie diagram corresponds to the number of possible values of the variables, whereas the proportion in the total pie corresponds to their relative percentage. In a bar chart, the frequency values are displayed on the y-axis, which can present absolute or relative frequencies.

How should I treat aortic valvular stenosis in a high-risk surgical patient who previously received a stent in the ostial left main?