Methods and results: Virtual histology intravascular ultrasound (VH-IVUS) and near-infrared spectroscopy (NIRS) imaging of a non-culprit coronary artery was performed in 178 (23.5%) women and 581 (76.5%) men who underwent invasive management of stable angina pectoris (SAP) or acute coronary syndrome (ACS). Women were older and had a worse cardiovascular risk profile than men, but less extended angiographic coronary disease. Irrespective of the presenting diagnosis, women had lower VH-IVUS-derived plaque burden than men (38.1% vs. 40.5% in SAP, and 35.9% vs. 38.8% in ACS). Standardised (mean 211 vs. 263 mm3 in SAP, and 199 vs. 245 mm3 in ACS) total plaque volume was lower in women. Volumes of fibrous tissue, fibro-fatty tissue, necrotic core and dense calcium were also lower in women. NIRS-derived lipid core burden index (LCBI) was lower in women, in particular in SAP (mean LCBI in the worst 4 mm 220 vs. 240). The observed differences remained significant after adjustment for clinical characteristics.

Relevant differences have been reported in the genesis, development and pathophysiology of coronary atherosclerosis between women and men, which have not been fully unravelled1,2. In women, coronary artery disease (CAD) appears up to 10 years later in life than in men and prevalent angiographic obstructions are less severe at all ages3,4. Importantly, however, the incidence of an acute coronary event is not primarily determined by the extent and severity of the luminal stenosis, but rather by the characteristics of the atherosclerotic plaque5,6. Hence, sex differences in coronary plaque composition are of potential importance.

During the last decades, catheter-based coronary imaging modalities have been developed to detect high-risk “vulnerable” plaques before their disruption6. In this context, virtual histology intravascular ultrasound (VH-IVUS) is capable of identifying thin-cap fibroatheroma (TCFA) lesions, which are prone to rupture7,8. Near-infrared spectroscopy (NIRS) has the potential to quantify the lipid core within coronary plaques, which may represent activity of atherosclerosis9,10. This paper expands on these findings, and aims to reveal any sex differences in the measurements that appeared relevant.

We combined the European Collaborative Project on Inflammation and Vascular Wall Remodelling in Atherosclerosis - Intravascular Ultrasound (AtheroRemo-IVUS) and the third Integrated Biomarker and Imaging (IBIS-3) studies, which had a similar design11,12. Both studies were conducted in the Erasmus MC and enrolled patients undergoing coronary angiography (CAG) or percutaneous coronary intervention (PCI) for stable angina pectoris (SAP) or acute coronary syndromes (ACS).

In 64 women and 211 men, NIRS imaging of the study segment was also performed by the Advanced TVC Imaging System™ (Infraredx, Inc., Burlington, MA, USA). NIRS imaging was limited to a “region of interest” (RoI), defined as the longest possible section of the study segment between two side branches. The lipid core burden index of the RoI (LCBIROI) was determined as well as the LCBI10mm and LCBI4mm in the 10 and 4 mm segments with highest values, respectively. NIRS images were analysed off-line at the Cardialysis core laboratory.

We collected data on the incidence of all-cause mortality, ACS, and unplanned coronary revascularisation (i.e., major adverse cardiac events [MACE]) in the patients who participated in AtheroRemo-IVUS during one-year follow-up.

We studied clinical characteristics and imaging findings in relation to sex. The presenting diagnosis was an important confounder of these relations. Therefore, we present results in SAP and ACS patients separately.

Linear regression was applied to reveal associations between sex (independent) and imaging measures (dependent). Results are presented as mean difference between women and men with 95% confidence intervals (CI). The association between sex and the presence of high-risk lesion characteristics was analysed by logistic regression. Results are presented as odds ratios (ORs) with 95% CI. We considered age, admission diagnosis, diabetes mellitus, systolic blood pressure, hypertension, dyslipidaemia, smoking, family history and body mass index (BMI) confounders of the relation between sex and imaging outcomes. We therefore applied multivariate regression with adjustment for these variables.

A two-sided p-value of <0.05 was considered significant for all analyses. We used SPSS, Version 20.0 for Windows (SPSS 20.0; IBM Corp., Armonk, NY, USA) for our calculations.

The medical ethics committee of the Erasmus MC approved our studies. Written informed consent was obtained from all patients. 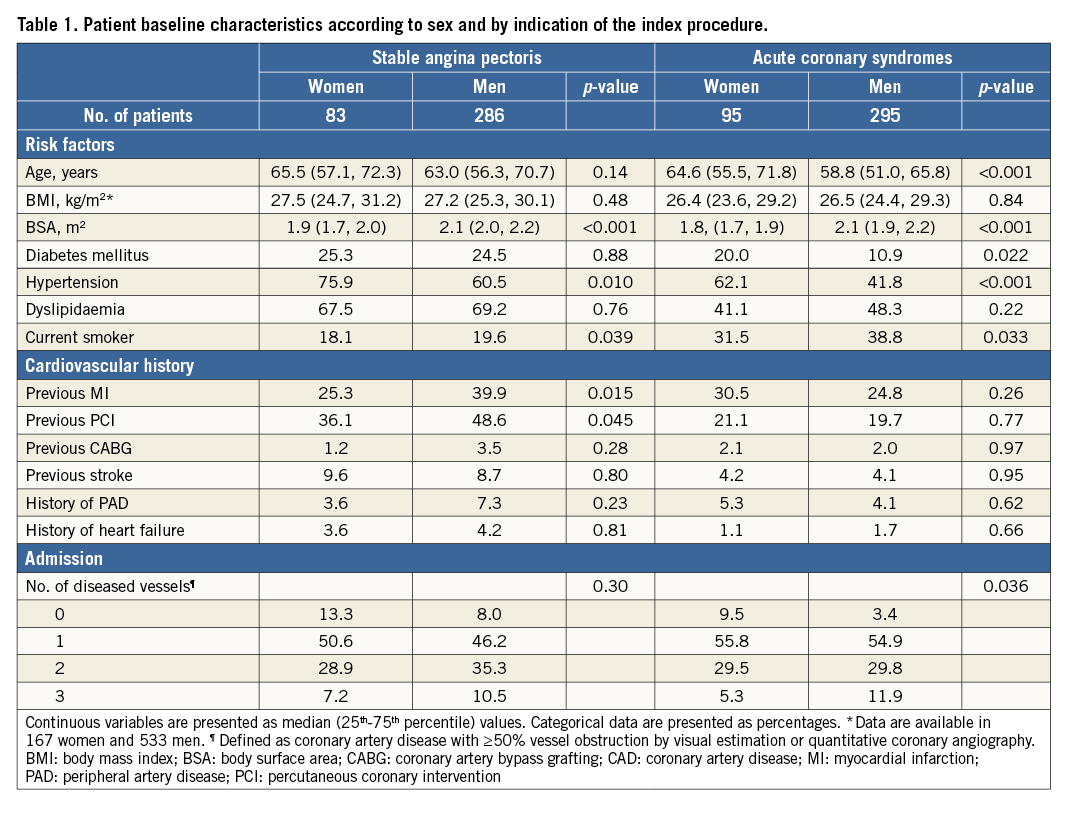 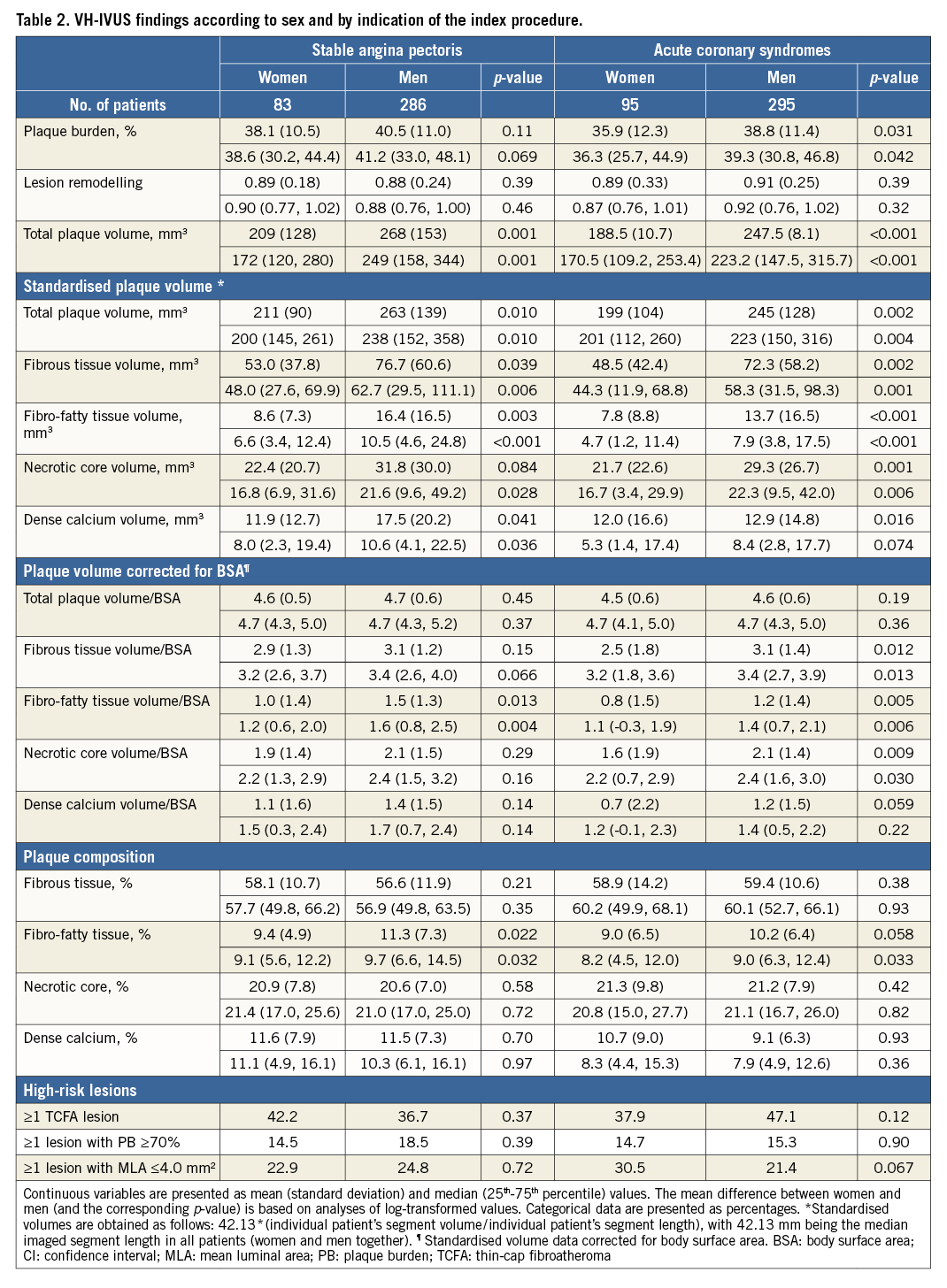 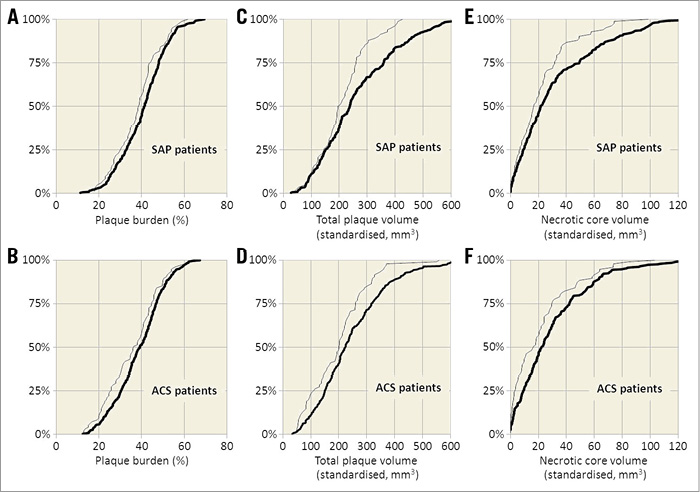 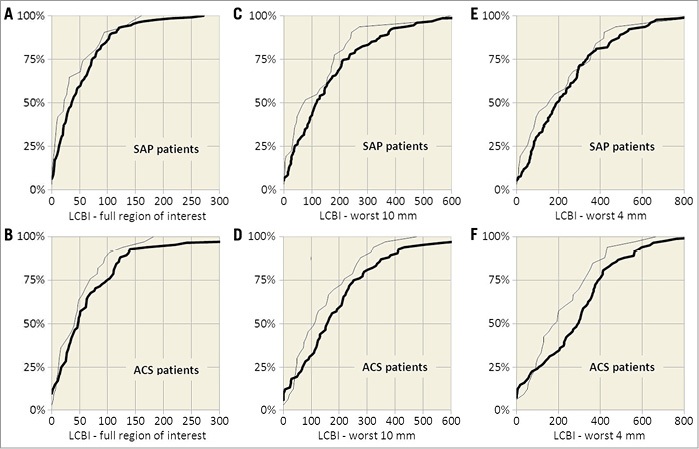 Women had lower absolute and standardised total plaque volumes than men, with standardised mean differences ranging from 34.9 to 41.1 mm3. Absolute (data not shown) and standardised volumes of fibrous tissue, fibro-fatty tissue, necrotic core and dense calcium were also lower in women. When corrected for body surface area (BSA), plaque volumes remained lower in women; however, differences became smaller and did not reach statistical significance. We found no sex differences in the presence of high-risk lesions, including TCFA lesions.

NIRS-derived LCBI values were slightly lower in women than in men, in particular in SAP. Women had lower maximum LCBI than men (160 versus 271 in SAP and 182 versus 571 in ACS), but LCBI distributions were not clearly left-shifted. Consequently, Mann-Whitney tests were non-significant.

In AtheroRemo-IVUS, 41 patients died or had a non-fatal ACS during one-year follow-up. We found no statistically significant differences between women and men (5.1% versus 5.9%, p-value 1.00 in SAP, and 9.6% versus 7.7%, p-value 0.57 in ACS). In SAP patients, the one-year incidence of MACE was significantly lower in women (6.8% versus 19.6%, p-value 0.020), which was mainly due to non-planned coronary revascularisations.

The women who were included in our study of patients with (documented) CAD had an adverse clinical cardiovascular risk profile compared with men. Still, the extent of significant CAD was considerably lower, whereas coronary plaque composition, based on state-of-the-art imaging, was somewhat more favourable.

Our finding that women presenting with SAP or ACS had less extensive CAD than men, despite having more comorbid risk factors, is largely in accordance with previous studies3,13. In PROSPECT, women had fewer (vessels with) non-culprit lesions and lower plaque volumes, including lower necrotic core volumes3. Interestingly, in PROSPECT, sex differences in plaque burden and plaque composition were mainly found in patients below the age of 65. In fact, as the PROSPECT investigators demonstrated, age appeared to be an important confounder in studies of sex-related differences in coronary sclerosis. Since the extent and structure of atherosclerotic lesions may also differ between SAP and ACS patients, we decided to stratify according to that presenting feature. Our study lacked power to further stratify for age. Still, it should be emphasised that our findings were maintained after adjustment for age (among other factors).

We found small differences in plaque composition between women and men, but the distribution of high-risk lesions, including TCFA lesions, was similar. Based on a Korean cohort of ACS patients, Hong and colleagues reported a higher prevalence of TCFA lesions in women, which might be explained by the fact that they studied culprit lesions only14. In PROSPECT (studying culprit and non-culprit lesions), no differences were found in the frequency of different plaque phenotypes. Also, plaque composition seems to be related to age, with most evident sex differences in younger patients3. Our study was mainly performed in the elderly, and included those presenting with SAP; subtle sex differences in plaque morphology might therefore have remained undiscovered. Nevertheless, necrotic core, a key determinant of plaque vulnerability, was lower in women.

No studies have published sex-specific NIRS-derived data in ACS patients. Bharadwaj and colleagues studied 128 SAP patients and found no differences in LCBI4mm between women and men15. Their LCBI values were higher than in our study, probably because of the poorer risk profile of their patients. In a previous report from our group, based on a lower number of patients, female sex was associated with low LCBI values, independent of age16. Data on the relationship between LCBI and other plaque characteristics are scarce. A study by Pu and colleagues demonstrated a weak positive relationship between (VH-derived) necrotic core and LCBI17. Although the LCBI values in our study are quite low, the observed sex differences might still be of interest, since NIRS may provide prognostic information that is not provided by traditional cardiovascular scoring systems18.

We found it puzzling to understand why women at a more advanced age and with more cardiovascular risk factors have lower plaque burden and lower LCBI than men. It might be hypothesised that the potential atherogenicity of specific risk factors or their clusters differ between sexes. For example, pre-menopausal women are largely protected against the development of CAD, most likely by their reproductive hormones19. Oestrogen might have anti-inflammatory effects, resulting in smaller lipid cores, less calcified plaques, and fewer TCFAs20. However, we enrolled post-menopausal women in whom oestrogen-mediated CAD retardation processes are less likely. We had no information on hormone levels, or on hormone replacement therapy. Others have advocated that coronary microvascular dysfunction is an important pathological mechanism for ischaemia in women2. A small imaging study found no correlation between LCBI and coronary microvascular dysfunction; however, it demonstrated a higher lipid deposition in patients with early stage CAD and epicardial dysfunction21. We had no data to support or disprove these early findings.

Plaque characterisation by IVUS-VH has consistently shown a good correlation with histology in human autopsy studies7, but not in porcine coronary arteries22. Furthermore, its ability to detect plaque erosion is limited given the current spatial resolution. However, despite concerns about its accuracy, we previously demonstrated that VH-IVUS is capable of discriminating patients according to cardiovascular risk23. Furthermore, VH-IVUS helps to understand the pathophysiology of CAD and is valuable in comparing plaque characteristics between patient groups. The newer NIRS imaging technology provides more precise information about plaque composition on the basis of the specific chemical signature of the fibroatheroma. In that respect, NIRS overcomes some of the (VH-)IVUS limitations. On the other hand, NIRS also has limitations, as it does not provide information on the depth of data acquisition. NIRS has shown good specificity (90%) for lipid pool detection, but modest sensitivity (50%)9. Optical coherence tomography (OCT) has a higher axial and lateral resolution, but a lower penetration depth than IVUS, so that visualisation of the entire depth of a lesion is difficult, especially in the presence of lipid-rich tissue, where the optical signal is strongly attenuated. In the landmark OCTAVIA study, based on OCT imaging of the culprit vessel in STEMI patients, no sex differences were found in plaque erosion or plaque rupture, or in minimum cap thickness and plaque constituents24. We can only speculate on OCT findings in AtheroRemo/IBIS-3 had we applied that modality in our patients. All in all, according to the state of the art, the combination of several intracoronary imaging modalities - such as the IVUS/NIRS combination which we applied in our study - currently provides the best assessment of coronary disease.

This was a single-centre study with a relatively small sample size and was too small to draw definite conclusions in relation to clinical outcome. Several studies have shown worse outcomes in symptomatic women with nonobstructive CAD (a condition which is more common among women), compared to normal subjects25-27. We were unable to confirm this observation in our study.

The plaque vulnerability concept is under debate28. Also, statin therapy and lifestyle changes seem to influence the composition of plaque in a favourable sense. Despite more stable plaques, people still suffer from the consequences of coronary atherosclerosis, including a growing number of women. Our study included mainly post-menopausal women, and our results may not be generalisable to younger women. Future studies should focus on visualising sex-related plaque changes, by combining various intravascular imaging techniques with cardiovascular outcome at an early stage of the atherosclerotic process.

In this cohort of patients with CAD, women had more favourable plaque characteristics than men, despite their worse cardiovascular risk profile. Thus, our study supports the notion of sex differences in the pathogenesis and development of CAD. Future studies are required to investigate the clinical consequences of these findings during long-term follow-up.