Aims: Closure of patent foramen ovale following presumed paradoxical embolic stroke remains controversial. The answer to the question as to whether cardiovascular risk factors (CVRF) impact on the recurrence of stroke in patients who have undergone PFO closure remains elusive so far. We aimed to investigate the potential impact of CVRF on the long-term rate of stroke/TIA recurrence in patients treated with an occluder following presumed paradoxical embolic stroke.

Conclusions: This study shows that, in patients with a prior presumed paradoxical embolic stroke, the risk for recurrent stroke/TIA after PFO closure is firmly linked to the presence of CVRF.

Percutaneous closure of patent foramen ovale (PFO) as a measure of secondary prevention in patients suffering from presumed paradoxical embolic stroke remains controversial. Until recently, most of the data showing a benefit of percutaneous PFO closure in patients suffering from presumed paradoxical embolic stroke were derived from uncontrolled and/or retrospective studies1-5. The multicentre randomised controlled CLOSURE I trial has now shed new light on the discussion. In this study, 909 patients who were younger than 60 years and had presumed paradoxical embolic stroke or transient ischaemic attack (TIA) were randomised to receive best medical therapy alone or percutaneous PFO closure in addition to best medical therapy6. No difference in the primary composite endpoint (two-year incidence of stroke or TIA, all-cause mortality for the first 30 days, and neurological mortality at 31 days to two years) and the rates of stroke or TIA was found between the two patient groups6. Although there are some limitations to this study such as the short follow-up time, these will be addressed by other ongoing randomised trials. Importantly, a subgroup of the included patients had readily identifiable cardiovascular risk factors (CVRF) even though a vascular read-out of these risk factors such as atherosclerosis might not be obvious. However, this subgroup might benefit to a lesser extent from percutaneous PFO closure. Therefore, the role of CVRF in the context of cryptogenic stroke and percutaneous PFO closure needs to be elucidated further. In the present study, we aimed to identify the predictors for recurrent stroke/TIA with emphasis on CVRF in a cohort of patients who underwent percutaneous PFO closure as a secondary preventive measure following a cerebrovascular event without an identifiable conventional cause.

From our institutional registry, 663 patients underwent percutaneous closure of PFO or atrial septum defects between July 1996 and May 2008. Of these, 443 patients had percutaneous PFO closure following a stroke/TIA without identifiable cause and these patients were included in the present study. These patients were considered eligible for percutaneous PFO closure when the following criteria were met: clinically or radiologically confirmed cerebrovascular event, presence of PFO with proof of right-to-left shunt, percutaneous PFO closure was technically feasible and absence of a thromboembolic source in the left heart chambers and valves, ascending aorta, aortic arch and the carotid system or history of atrial flutter/fibrillation. Patients on vitamin K antagonists for PFO/ASA with additional clinical indications for vitamin K antagonist treatment were considered unsuitable for percutaneous device closure. Patients with overt atherosclerosis were also excluded from the treatment in contrast to those patients with CVRF but no evidence of overt atherosclerosis. Following PFO closure, patients were recommended to take aspirin (ASS) and clopidogrel for three months followed by ASS alone for at least three further months. Thereafter, the decision for further antiplatelet or anticoagulant treatment was left to the discretion of the referring physician.

Follow-up was performed using a structured telephone interview with the patient or the patient’s general practitioner in order to identify any recurrent cerebrovascular event or death. Stroke/TIA was defined as a transient (<24 hr) or persistent neurological deficit, for which the patient was treated as an in-patient.

Categorical data are presented as frequencies and percentages and were compared by χ2 test. Continuous variables were tested for normal distribution using the Kolmogorov-Smirnov test. All variables were found to be normally distributed and are presented as mean ±standard deviation. The unpaired Student’s t-test was used for comparisons between the two groups. Kaplan-Meier curves were generated for recurrent stroke/TIA and all-cause mortality. The log-rank test was used for the comparison of survival curves between both patient groups. ROC curve analysis was used to identify the best cut-off to dichotomise age for log-rank testing. Univariate Cox regression analyses were performed in order to identify predictor(s) of recurrent stroke/TIA and all-cause mortality. The Essen risk score (ESRS) included the following variables and was calculated as suggested previously: age, hypertension, diabetes mellitus, previous myocardial infarction, other cardiovascular disease, peripheral arterial disease, smoking, previous TIA or ischaemic stroke7. A value of p<0.05 was considered statistically significant. All statistical analyses were performed using SPSS 15.0 (SPSS Inc., Chicago, IL, USA). 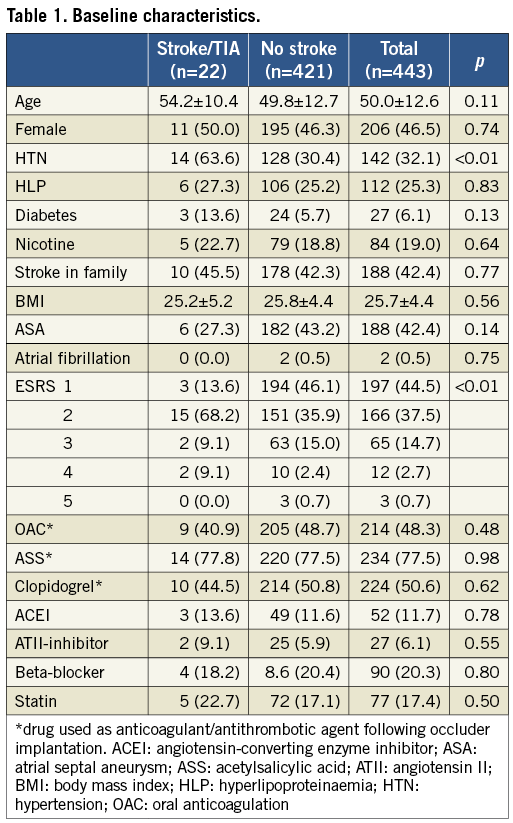 During the follow-up period, a total of 22 patients had a stroke/TIA (5.0%) and 17 patients (3.8%) died. Two of the deaths were directly caused by stroke and four were cardiovascular deaths other than stroke. The patients who died were also more likely to have had a recurrent cerebrovascular event following device closure. Overall, 27.3% of the patients reported palpitations and 20.5% chest discomfort following device implantation (Table 2). 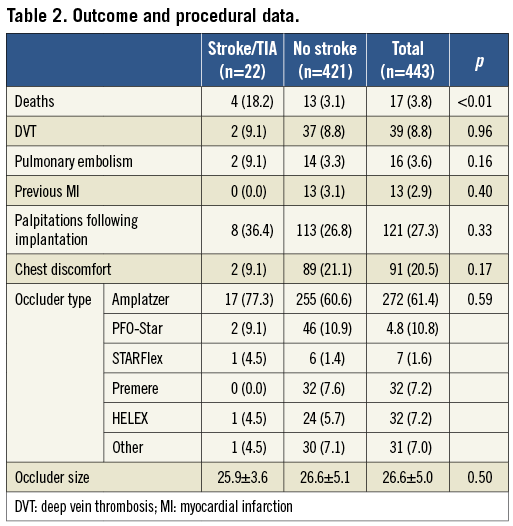 Kaplan-Meier estimates demonstrated that recurrent stroke/TIA was more common in patients with hypertension, those older than 50 years of age and those with an ESRS of two or more (Figure 1A-Figure 1C). These three parameters were also predictive upon univariate Cox regression analysis with hypertension being the only independently predictive variable on multivariate analysis (Table 3). Further analysis including discontinuation of antiplatelet or anticoagulation therapy and other oral medications as well as procedure-related data failed to reveal any additional predictors of recurrent stroke/TIA (Table 3). 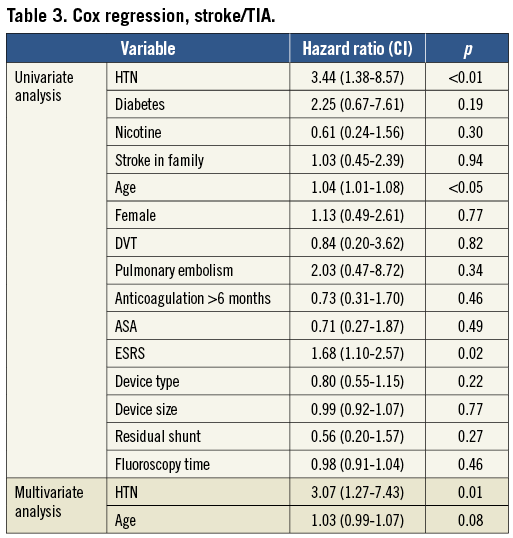 On Kaplan-Meier estimates, a history of hypertension did not affect survival (Figure 2A). The survival was reduced in patients who were older than 50 years of age (Figure 2B). An ESRS of more than two also did not affect mortality (Figure 2C).

The suggested possible causal relationship between PFO and stroke has been proposed, given the frequently reported association between both conditions8. First, the anecdotal finding of transient thrombus in PFO has provided some basis to the concept of paradoxical embolism9,10. Second, the incidence of PFO in patients with otherwise unexplained stroke is significantly higher as compared to healthy individuals3. Mas et al suggested that patients with an otherwise unexplained stroke who have a PFO in the presence of an aneurysm of the interatrial septum (ASA) should receive further preventive treatment in addition to ASS alone11. This was incorporated in the guidelines published, e.g., by the German Neurological Society, which in this case recommend the prescription of warfarin and phenprocoumon, respectively12. The logistic issues and risks associated with vitamin K antagonist therapy in conjunction with the relatively low risk and technically simple percutaneous PFO closure technique have led to an increasing interest in the use of this technique as an alternative to vitamin K antagonist therapy. Therefore, although the guidelines recommend PFO closure only after recurrent otherwise unexplained stroke in patients on vitamin K antagonists, there is major inhomogeneity in clinical practice between different centres.

In addition, the term “cryptogenic stroke”, which is often used to identify patients with an indication for percutaneous PFO closure, is not well defined and is misleading in more than one aspect. The term usually refers to 30-40% of strokes with no conventional cause, even after extensive workup13-15. However, one has to bear in mind that the specific reason for a stroke in a particular patient remains presumptive in most cases, even after identification of potential eliciting mechanisms such as atherosclerosis or atrial fibrillation, and could also be termed as “cryptogenic” under such circumstances. As a consequence, both are conceivable: that a patient with extensive evidence of atherosclerosis suffers a paradoxical embolic stroke and that a patient with a PFO suffers a non-embolic stroke despite the fact that an extensive workup has failed to demonstrate evidence of atherosclerosis. Bearing in mind this difficulty of establishing the exact cause of a stroke in an individual patient, one potential approach to improve the identification of patients who benefit from PFO closure might be the identification of predictors of recurrent stroke after PFO closure. In this regard, assessment of CVRF might be of particular interest. Along this line of thought, the CLOSURE I trial has demonstrated that about 80% of recurrent cerebrovascular events following PFO closure are non-cardioembolic6. Our data support these findings, as they show that recurrent stroke after PFO closure is dependent on general cardiovascular risk. Whereas our data do not exclude the possibility that the initial stroke which precipitated PFO closure was indeed caused by paradoxical embolism, the current data certainly indicate that careful patient selection for interventional PFO closure is mandatory, especially in the presence of a high cardiovascular risk profile.

One other finding in our cohort merits attention: more than one quarter of all patients (27.3%) reported new or worsened palpitations following the procedure. Although the cause of palpitations was not objectively assessed in our study, this observation raises the question whether either 1) PFO closure favours the occurrence of - at least transient - atrial fibrillation, or 2) “cryptogenic” atrial fibrillation was present in these patients prior to PFO closure. As undiagnosed atrial fibrillation might also be a cause of stroke/TIA, this issue deserves further consideration.

Our study has several limitations in that it reports observational data derived from a registry of a single centre. However, the data comprise a large series of patients, reflect a “real-world” population and report a long-term follow-up. Given that patients were recruited over a time span of almost 12 years, the procedural characteristics may have changed due to the advance in equipment technology and skills. For example, the presence or absence of ASA was not taken into account for the indication of PFO closure prior to 2001. However, patients before that time only represent a small proportion of patients in our study. Furthermore, our patients were not stratified by findings in cranial computed tomography or magnetic resonance tomography.

In conclusion, this study indicates that the risk for recurrent stroke/TIA after PFO closure is dependent on established cardiovascular risk factors and the ESRS. Patients with suspected paradoxical embolic stroke should be closely assessed for the presence of cardiovascular risk factors, as some patients might be diagnosed erroneously with cryptogenic stroke and others may require continuation of drugs for secondary prevention despite PFO closure.