Obesity is a well-recognised risk factor with a likely causal relationship with cardiovascular disease (CVD). Obesity has reached epidemic proportions and is trending upward globally1. Despite the negative impact of obesity on cardiovascular health, it has been repeatedly demonstrated that, when CVD occurs, there is a moderate-term survival advantage of being overweight or mildly obese compared with thinner patients with the same CVD2. This pattern of relationship is called the obesity paradox. The obesity paradox has been demonstrated across a wide range of CVD3 and cardiovascular therapy including percutaneous coronary intervention (PCI)4. Although knowledge about the obesity paradox after PCI and its underlying mechanisms has increased, it is still considered a product of statistical confounding and remains an area of considerable controversy. A better understanding of the obesity paradox after PCI is important for at least two reasons. First, considering the current prevalence and future projections of obesity, it is expected that PCI will increasingly be performed in overweight or obese patients, and, second, the apparent association of being overweight or obese with better prognosis after PCI may serve as a poor incentive to secondary prevention measures and may negate the benefits of deliberate and purposeful weight control (with diet and exercise) in overweight patients with coronary artery disease (CAD).

In this issue of EuroIntervention, Wolny et al5 assessed the association of body mass index (BMI) with five-year outcomes in patients with CAD undergoing PCI.

The study included individual patient-level data pooled from 13 randomised trials with a total of 22,922 patients. The primary outcome was five-year all-cause mortality. Non-cardiac mortality, myocardial infarction, definite/probable stent thrombosis, ischaemia-driven target lesion revascularisation and non-target lesion revascularisation were also assessed. Overweight and obese patients were of younger age, had more CVD risk factors, and had larger vessel size and shorter, less calcified and less complex lesions than normal weight (or underweight) patients. All-cause mortality was lower in overweight and class I-II obesity patients compared with normal weight patients. After adjustment, class I obesity remained independently associated with a lower risk of all-cause mortality. Excess body weight was associated with a higher adjusted risk of cardiac mortality and a lower risk of non-cardiac mortality. The rates of non-target lesion revascularisation, a marker of progression of coronary atherosclerosis, were higher in overweight and obese patients. No association between BMI and the adjusted risk of myocardial infarction or stent thrombosis was observed.

The authors should be congratulated for conducting this study. The study confirms and extends findings from previous studies with the strength of assessing the association between BMI and post-PCI outcomes in a large number of patients, investigating the association between BMI and cause-specific mortality, assessment of the BMI-outcome association over long-term follow-up and relying on centrally adjudicated events. The study confirmed the existence of the obesity paradox after PCI and showed that the phenomenon was mostly driven by lower non-cardiac mortality associated with higher BMI. The study showed that coronary lesions have distinct morphological characteristics in thin and obese patients, a finding that may suggest differences in the pathophysiology of atherosclerosis in these groups and have practical implications for PCI procedures. The finding of an association between higher BMI and cardiac mortality and progression of coronary atherosclerosis suggests that obesity in patients undergoing PCI is not a benign condition. The study has limitations inherent to its retrospective design, inclusion of low-risk patients and lack of information on potential effect modifiers such as non-cardiac comorbidities, chronic medical therapy, vascular access-site and PCI-related complications. Although BMI is the most commonly used metric to define obesity3, it does not differentiate between body mass and body fat and offers no information on fat distribution in the body. Since the entire analysis was based on a single BMI value at the time of PCI, the impact of secondary prevention measures undertaken in the post-PCI period remains unknown. Nonetheless, these limitations are unlikely to impact on the main study findings.

Crucial to the understanding of the obesity paradox in patients with CAD is the asymmetrical distribution of cardiovascular risk across categories of body weight. Distribution of factors with positive or negative effects on survival across the whole spectrum of BMI rather than body weight per se seems to predict the outcome6. A higher risk of mortality observed in patients with low and high BMI values is explainable by clustering of strikingly different risk factors in these two BMI segments (Figure 1). In the overweight and mildly obese spectrum of BMI, another set of factors seems to underlie the outcome after PCI. Since overweight patients with CAD are younger at the time of PCI, the younger age-related survival advantage is key to explaining their better outcomes. Moreover, several factors with a positive impact on the outcome after PCI seem to be present in overweight and mildly obese patients (Figure 1). Finally, it has to be emphasised that, even in the most meticulously designed and conducted studies, unmeasured confounders in the BMI-outcome association are likely to remain. 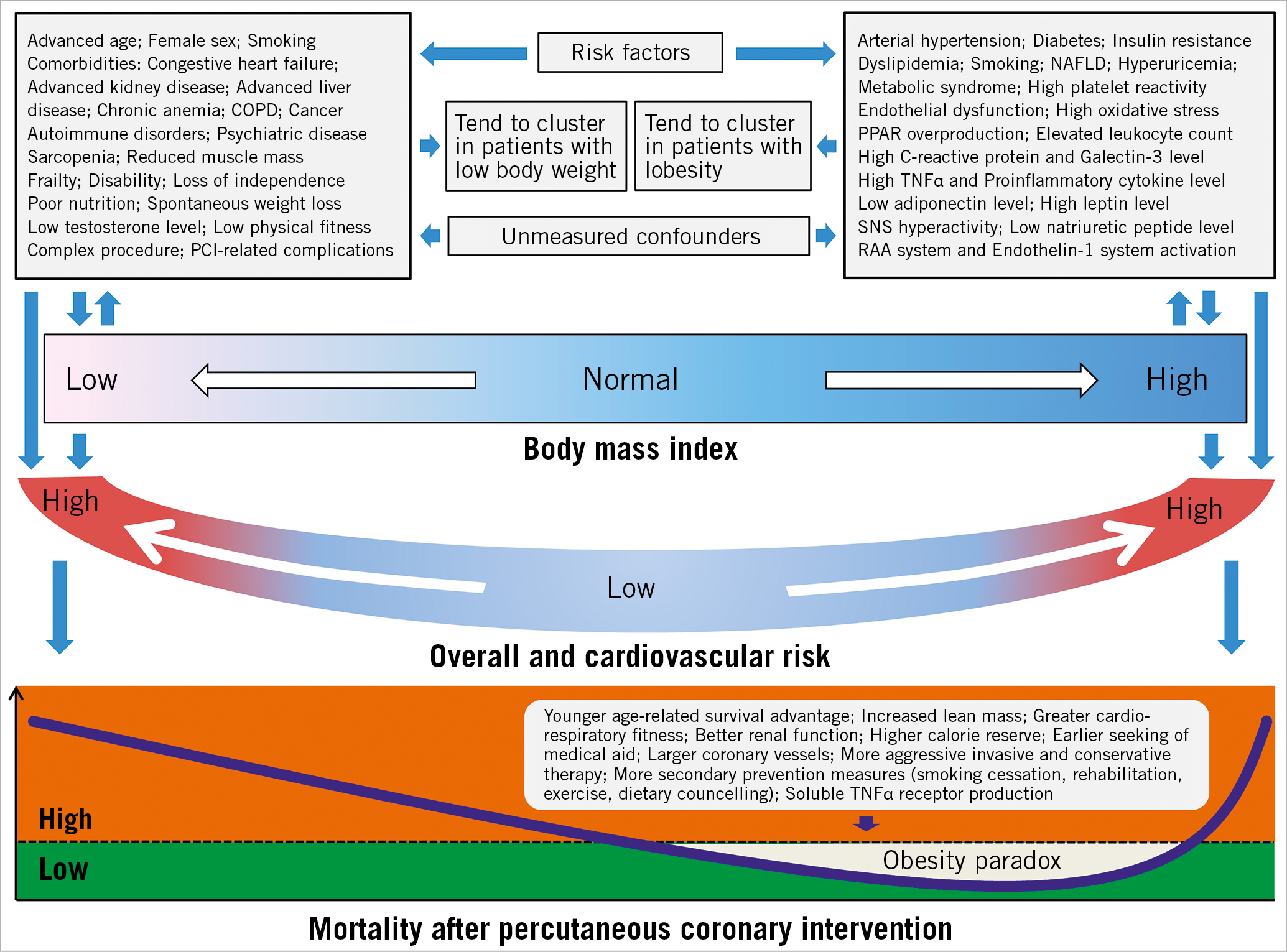 The study by Wolny et al5 may have implications for secondary prevention measures in patients with obesity after PCI. The study showed a higher risk of cardiac mortality and progression of coronary atherosclerosis associated with higher body weight. Overweight patients have a higher prevalence of cardiovascular risk factors such as arterial hypertension and diabetes, and weight control is crucial for achieving therapeutic goals in these morbid conditions. Weight loss in general or specifically following an acute coronary event or PCI may be observational (unintentional or spontaneous) or intentional, i.e., occurring as a consequence of application of programmed therapeutic or lifestyle changes. These patterns of weight loss differ markedly with respect to the directionality of their association with the subsequent outcome. A recent meta-analysis showed that observational or intentional weight loss was associated with a significant 62% increase (in case of observational weight loss) and 33% decrease (in case of intentional weight loss) in the risk for major adverse cardiovascular events, respectively, calculated for 5% body weight loss over a mean follow-up of 3.2 years7. Thus, a strategy of purposeful weight control (with healthy diet and exercise) should be pursued in overweight patients with CAD after PCI. Observational or spontaneous weight loss following an acute coronary event or PCI should increase the awareness of clinicians because it may signal an increased subsequent risk due to an underlying occult disease8. By developing CVD at a younger age, obesity leads to markedly shortened life expectancy. It has been shown that obese non-smokers lose up to seven years of life expectancy compared to normal weight non-smokers9. Thus, we believe that a normal healthy body weight and less CVD is better than a temporary benefit of being overweight at the expense of markedly reduced overall survival.

No room at the inn? Pulmonary artery stent implantation and the fate of the bronchus