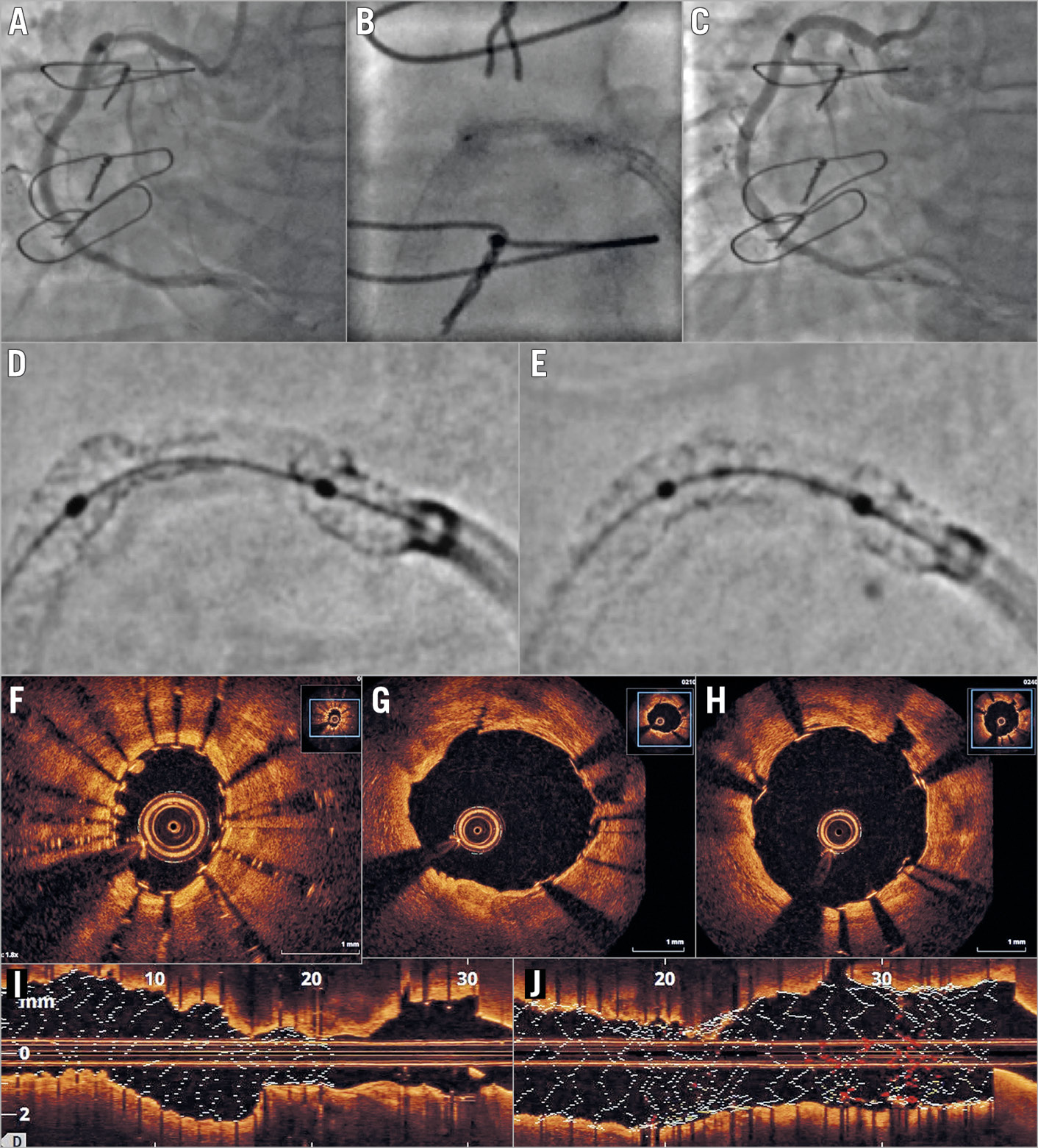 A 67-year-old male presented with recurrent angina 20 years after coronary artery bypass surgery (CABG). He has type 2 diabetes mellitus and was already taking four antianginal medications. Angiography confirmed occluded left anterior descending (LAD) and obtuse marginal (OM) arteries. There was a severe proximal right coronary artery (RCA) stenosis with diffuse mid vessel disease and further severe disease distally. A left internal mammary graft to the mid LAD and a saphenous vein graft (SVG) to the OM were both patent. An SVG to the RCA was occluded. Follow-on PCI was performed to the native RCA with the insertion of three drug-eluting stents. There was severe underexpansion of the proximal lesion despite predilatation with a non-compliant (NC) balloon and sequential post-dilatations with a 3.5×15 mm NC balloon to 24 atm, a 3.5×15 mm NC Scoreflex® balloon (OrbusNeich, Hong Kong, China) to 24 atm and a 3.5×10 mm OPN balloon (SIS Medical AG, Frauenfeld, Switzerland) to 40 atm. Subsequently, the case was reviewed at a multidisciplinary meeting and the following therapeutic options were considered: 1) no further intervention; 2) rotational atherectomy; 3) laser ablation; 4) further stent implantation; 5) intravascular lithotripsy (IVL); 6) repeat CABG. Given the increased risk of restenosis and/or stent thrombosis within the severely underexpanded stent we did not feel that medical therapy alone would be safe; the patient did not wish to undergo repeat CABG. Therefore, we recommended attempting IVL in the first instance with rotational atherectomy as a second option if IVL failed to facilitate full stent expansion.

Repeat PCI was undertaken from the right radial artery using a 7 Fr Amplatz left (AL) 0.75 guide catheter. During predilatation with a 3.5 mm NC balloon to 12 atm we observed persistent “dog-boning” (Figure 1A, Figure 1B). Enhanced angiographic images demonstrated the underexpanded stent and a gap between the stents which had not been identified during the index procedure (Figure 1D). Optical coherence tomography confirmed these findings and demonstrated superficial and deep circumferential calcification (Figure 1F, Figure 1I). A 3.5×20 mm IVL balloon was easily delivered within the underexpanded stent and inflated to 4 atm. Eighty pulses of acoustic energy were delivered in eight cycles of 10 pulses each, at a frequency of 1 Hz. During the first cycle, the stent was seen to open on fluoroscopy and near complete expansion was confirmed by angiography. The unstented stenotic segment was also markedly improved (Figure 1E). OCT showed a well expanded stent with fissures in the calcification and no evidence of dissection (Figure 1G). We implanted a further 4×16 mm drug-eluting stent (DES) at 14 atm to cover the unstented segment and post-dilatation was performed using a 4 mm NC balloon at 20 atm. The final angiographic and OCT images demonstrated an excellent result with only minimal stent underexpansion (Figure 1C, Figure 1H, Figure 1J).

IVL involves the delivery of sonic pressure waves using a catheter with miniaturised lithotripsy emitters. These waves pass through the surrounding tissue and fracture the calcified plaque3. In this case, the effects were dramatic with almost immediate and near complete stent expansion during the first cycle of energy despite a balloon inflation pressure of only 4 atm. Importantly, IVL was able to facilitate full expansion of both the unstented calcified stenosis and the underexpanded stent, confirming that the presence of the stent struts was not an impediment to the transmission of acoustic energy to the vessel wall. Whilst the outcome of this case was successful, the future use of IVL is likely to be in de novo lesions to prepare the vessel better for stent deployment and ultimately avoid underexpansion.