How should procedure-related myocardial infarction be defined, and does it matter? (Spoiler alert – it does!)

Determining the definition of myocardial infarction (MI) utilised in a clinical trial is a “make or break” decision which may determine whether the study is positive or negative. For example, in both the recent EXCEL trial of percutaneous coronary intervention (PCI) versus coronary artery bypass grafting (CABG) in patients with left main coronary disease and the ISCHEMIA trial of an invasive versus a conservative approach in patients with stable ischaemic heart disease and at least moderate ischaemia, the long-term outcomes for the primary composite endpoint demonstrated non-proportional hazards. In both studies the group that had worse periprocedural outcomes had superior long-term outcomes such that minimal net differences between treatments were present1,2. In each study the component of the composite endpoint that drove this discordance was MI. In this regard, the definition of non-procedural MI has been largely standardised across clinical trials, as reflected in the universal definition of MI3. In contrast, definitions of procedural MI that are in widespread use vary widely, some incorporating low biomarker-based thresholds of periprocedural myonecrosis as representing MI while others require much higher detection thresholds. Depending on the definition, these thresholds may or may not vary between PCI and CABG. In some definitions biomarker elevations alone are sufficient to diagnose procedural MI, whereas other definitions also require supporting electrocardiographic, angiographic or imaging evidence of infarction. Finally, even the biomarker of choice to assess periprocedural myocardial injury is not agreed upon. For example, the Society for Cardiovascular Angiography and Interventions (SCAI) definition of a “clinically relevant” MI strongly recommends creatine kinase-myocardial band (CK-MB) as the biomarker to assess procedural infarction4, whereas the “universal definition” of MI strongly recommends troponin assessment5. Although the criteria vary, both the EXCEL and ISCHEMIA trials employed a definition for procedural MI with relatively high biomarker thresholds. Had a more sensitive definition been used, the principal conclusions drawn from these trials may have been markedly different. Such exploratory analyses from each study will be reported later this year. Moreover, demonstration of the effectiveness of some therapies (e.g., glycoprotein IIb/IIIa inhibitors) relied on mitigation of small post-PCI biomarker elevations. Had the prevention of death, large MI or stent thrombosis been required for their regulatory approval, it is doubtful that sufficiently sized studies would have been feasible. In hindsight, risk-benefit assessments need to consider the utility (or lack thereof) of preventing small biomarker elevations if they are not of clinical consequence.

In this regard there is no general agreement as to the degree of myonecrosis (or evidence of myocardial injury) after PCI or CABG that rises to the level of a procedural “MI”, warranting informing the patient (and payers and quality assessors) that an important adverse complication has occurred, and perhaps dictating alternative therapy selection upfront either to avoid its occurrence or to modify subsequent management. In this regard, a 5 g/dL decline in haemoglobin is considered in almost all classifications to represent a major bleed, whereas a 0.5 g/dL decrease barely warrants attention. Although all would intuitively agree that any loss of myocardium is undesirable, in the era of high-sensitivity troponins, myonecrosis may be detected in 80% or more of PCI and CABG procedures. Such biomarker elevations are also more common in patients with extensive coronary artery disease and other comorbidities that may dictate the prognosis rather than the extent of myonecrosis itself. Thus, we were the first to propose a definition of procedural MI that was associated with subsequent clinically meaningful adverse events after multivariable adjustment for confounders that may co-register with biomarker increases and outcomes, such as age, renal insufficiency, extent of atherosclerosis, number of treated lesions, etc.4. Other international organisations5 and numerous clinical trials have subsequently adopted variations of this clinically relevant procedural MI definition.

As few studies have reported the relationship between procedural MI and subsequent heart failure or cardiovascular hospitalisations, death has been the metric most often used to examine the clinical relevance of post-revascularisation procedure myocardial injury. While numerous studies have shown a strong independent relationship between large periprocedural elevations in CK-MB and subsequent mortality after PCI, such a relationship between troponin elevations and death has not been consistently demonstrated4. In the meta-analysis published in this issue of EuroIntervention, Li and colleagues examined the relationship between cardiac troponin I (10 studies), troponin T (5 studies), and CK-MB (12 studies) with outcomes during follow-up ranging from 3 months to 5.6 years, concluding that elevations of CK-MB >1x the 99th percentile URL and troponin I >3x the 99th percentile URL were related to subsequent mortality6.

Unfortunately (or fortunately, depending on your perspective), there are several important limitations to this analysis that disqualify those conclusions. First, baseline (preprocedural) troponin elevation is a strong predictor of mortality, even if the baseline increase is not due to acute MI. Prior studies have shown that the relationship between post-PCI troponin elevations and mortality may be eliminated if baseline elevations are accounted for as a confounder7. Surprisingly, in the present meta-analysis only four of the 10 troponin I studies excluded patients with baseline troponin values above the 99th percentile URL. Analysis restricted to these four studies found no significant relationship between post-PCI troponin elevation and death.

Third, multivariable analysis was not performed in most of the component trials to determine whether troponin elevation was an independent predictor of death. In this regard, creatinine clearance, extent of atherosclerosis, left ventricular function, procedural details such as number and type of treated lesions, use of atheroablation, adjunct pharmacotherapy, etc., are all strongly correlated with both peak troponin elevations and prognosis after PCI (regardless of troponin elevation). Troponin elevations may thus be an innocent bystander to the effects these covariates have on survival (i.e., an epiphenomenon). An individual patient data (IPD) pooled multivariable analysis would be required to account for these confounders, which was not feasible in the present study. In this regard meta-regression is a poor substitute. In addition, a pooled adjusted analysis would have enabled spline analysis to examine whether the relationships between troponin and CK-MB biomarker elevations and death were linear and, if not, where the thresholds emerged.

Fourth, the relationship between troponin T and mortality was not reported. Several of the component studies did report this association. Pooling the data relating both troponin I and T to mortality and assessing heterogeneity might have been insightful. Finally, the variable duration of follow-up introduces methodologic issues which could have been accounted for by assessing the incident rate of outcomes per person-years between the treatments or with other techniques.

As stated in the introduction to this editorial, a consensus definition of a clinically relevant MI is essential to provide confidence in the outcomes of clinical trials, to guide clinical decision making and to provide useful prognostic data to regulators, patients, payers, scientists and institutions tasked with improving health outcomes. In this regard, the authors are to be congratulated for attempting to provide clarity on an issue which has an ever-expanding literature from which to draw data. Unfortunately, most of these prior studies have notable limitations which no meta-analysis can overcome. While an IPD pooled analysis would be welcome, large-scale prospective studies are warranted specifically designed to inform the optimal definition of a clinically relevant MI after revascularisation by PCI and CABG (Table 1). 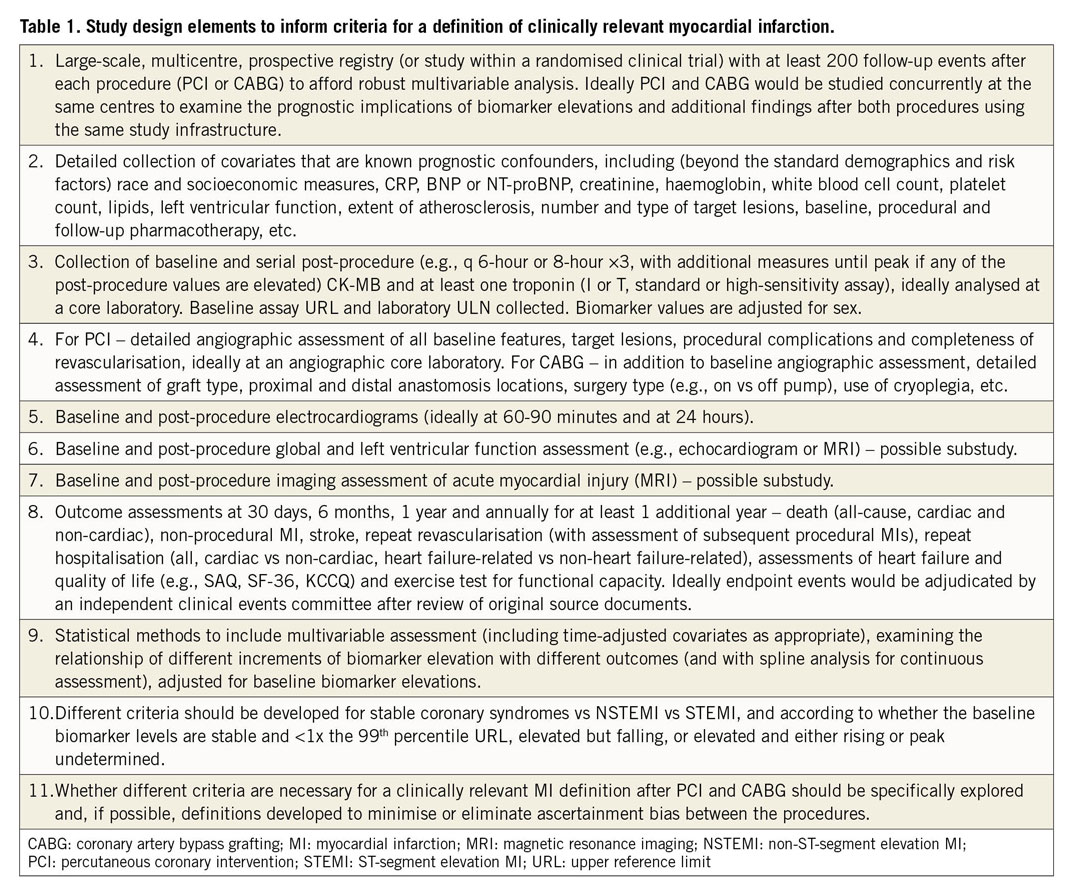 Bioresorbable scaffolds and STEMI: an ideal setting, but still vacant