In patients with acute coronary syndrome (ACS) undergoing PCI, bleeding is associated with increased mortality1. An abbreviated dual antiplatelet therapy (DAPT) is recommended after drug-eluting or bare metal stent (BMS) implantation for patients at high bleeding risk (HBR)2. The LEADERS FREE trial3 demonstrated superiority for safety and efficacy endpoints of a polymer-free Biolimus A9™ (BA9) drug-coated stent (DCS) over a similar BMS for patients at HBR treated with one-month DAPT. The one-year outcome of a pre-specified substudy of patients presenting with ACS has been reported4.

The aim of this analysis was to evaluate whether the demonstrated superiority in safety and efficacy of the DCS compared to BMS at one year was sustained up to 24 months in HBR patients with ACS.

The study includes all patients presenting with ACS at HBR from the modified intention-to-treat analysis of the LEADERS FREE trial3,4, a randomised, double blind trial. Patients undergoing PCI were assigned to a polymer-free BA9 DCS (BioFreedom™; Biosensors Europe, Morges, Switzerland) or a similar BMS (Gazelle™; Biosensors Interventional Technologies, Singapore, Singapore). All patients were assigned to one month of DAPT only, followed by long-term single antiplatelet therapy (SAPT).

Six hundred and fifty-nine patients5 presenting with ACS (554 NSTEMI and 105 STEMI) were followed for two years after assignment to DCS (330 patients) or BMS (329 patients) treatment. 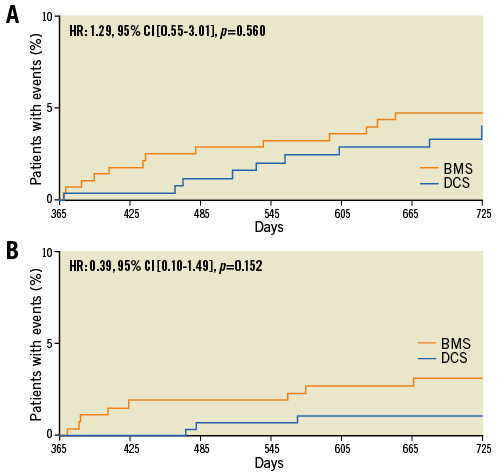 Details of antiplatelet and oral anticoagulation regimen adherence during follow-up are provided in the Supplementary Appendix, and in Supplementary Table 1.

In this analysis of the LEADERS FREE ACS substudy of patients at HBR and with ACS who received only one month of DAPT, the superiority of the BA9 DCS over a BMS was preserved up to two years for both the primary efficacy and the primary safety endpoints. DCS treatment showed a lower rate of MI and a trend towards a lower ST rate, whereas cardiac death was not statistically different between treatment groups.

This predefined LEADERS FREE ACS substudy did not use a sub-randomisation and is insufficiently powered for clinical endpoints.

– Given the unique properties of the studied DCS, our observations should not be extrapolated to other drug-eluting stents or DCS, or to stents with different drug-elution kinetics.

– The trial was designed to compare two strategies using a guideline-recommended minimal one-month DAPT course for BMS implantation and therefore no conclusions can be made concerning the optimal duration of DAPT for HBR patients after DCS implantation.

In HBR patients presenting with ACS undergoing PCI followed by one-month DAPT, the safety and efficacy benefits of a BA9 DCS compared to BMS were sustained up to 24 months. This study provides further evidence discouraging the use of BMS in HBR patients with ACS.

This work was funded by Biosensors Europe.

Randomised comparison of JUDkins vs. tiGEr catheter in coronary angiography via the right radial artery: the JUDGE study