STEMI patients and non-culprit lesions: what to do and when?

Patients presenting with STEMI often have multiple lesions in the non-infarct-related coronary arteries with an incidence of between 40 and 60%. The presence of severe lesions in the non-infarct-related coronary arteries is associated with a higher chance of presenting with cardiogenic shock, electrical instability and poorer outcome after primary PCI1.

A problem which is confronted on an almost daily basis is what to do with these unexpectedly encountered non-infarct-related lesions. It is surprising how often these patients were “asymptomatic” before presenting acutely.

The current 2012 ESC guidelines for management of STEMI patients dictates that primary PCI should be limited to the culprit vessel with the exception of cardiogenic shock and persistent ischaemia after successful PCI of the culprit vessel (class 2A, level B)2. The 2009 ESC guidelines for PCI even state that decisions about PCI of non-culprit lesions should be taken later and only guided by objective evidence of residual ischaemia3. However, current evidence on the optimal management strategy for non-culprit lesions in primary PCI patients is mainly based on rather old, mainly retrospective and perhaps biased data, and adequately sized randomised data are lacking. Major limitations in the relevant literature are the retrospective analysis, the confounder of baseline differences, different clinical presentation of the patients, and operator reason to perform or defer multivessel PCI. Only a few small-sized randomised studies looking at acute or staged multivessel PCI have been published. A recent literature meta-analysis by Vlaar et al showed some interesting differences in mortality outcome between culprit-only and multivessel PCI studies4. On the one hand, the registry data showed a clear mortality benefit for the culprit-only approach, whereas the randomised data showed no mortality benefit for the culprit-only and even a trend towards mortality benefit for multivessel PCI.

The conservative approach makes sense, as the non-culprit lesions are found as bystanders of the culprit lesions. Medical or ischaemia-driven treatment of these “stable” non-culprit lesions is concordant with the current guidelines for PCI and up until now there has been no clear evidence that we should act differently. Furthermore, Dambrink et al showed that the functional stenosis severity of these non-culprit lesions by FFR is frequently overestimated5. The disadvantage of the conservative approach is that one relies on symptoms and ischaemia tests in patients in whom symptoms were absent before their STEMI presentation and who have multivessel disease and/or have an abnormal ECG. These factors often make non-invasive ischaemia-detecting tests less reliable.

Complete revascularisation acutely or staged, on the other hand, has advantages, which have not yet been adequately investigated. Plaque instability may not be limited to the culprit lesion only, and complete coronary revascularisation is known to be associated with better long-term prognosis. Furthermore, patients feel more comfortable knowing that residual stenoses have been treated. This of course should be weighed against the risk of additional PCI and stent procedures which are augmented due to the prothrombotic and inflammatory milieu, contrast load and damaged left ventricular function in the acute phase. However, some of these risks can be limited by staging the procedure after a few weeks. Nevertheless, the appropriateness of additional PCI/stent procedures of apparently significant (asymptomatic) non-culprit lesions is highly debatable with only limited evidence. Only the recent PRAMI trial, in which STEMI patients with apparently significant multivessel disease were randomised between acute complete revascularisation versus culprit-only with optimal medical management, showed for the first time a significant reduction in the composite of cardiac death, myocardial infarction or refractory angina in the acute complete revascularisation “preventive PCI” group compared to culprit-only and optimal medical therapy6.

How should we position the messages of the studies by Jaguszewski et al7 and Onuma et al8 reported in this issue of EuroIntervention? Jaguszewski and colleagues analysed the nationwide Swiss AMIS Plus registry for in-hospital outcome of patients undergoing single-vessel or multivessel PCI during the acute primary PCI procedure. As expected, those who underwent multivessel PCI were more often at high risk. More interesting is the observation that, when stratified by risk, in-hospital mortality was similar between single-vessel and multivessel PCI. Unfortunately, no propensity score matching was performed. From this large-scale registry study one can derive that acute multivessel PCI is not per se harmful compared to single-vessel primary PCI and that acute complete revascularisation is potentially beneficial in reducing costs and being more patient-friendly.

Although the study by Onuma investigated a slightly different population (non-ST-elevation ACS), the main observation from this single-centre registry analysis is in line with the above-mentioned PRAMI trial. It shows that acute multivessel PCI reduces all-cause mortality compared to culprit vessel PCI only. In the propensity score matched analysis the main outcome was still valid.

Is it time to change the guidelines? I don’t think so. Both studies are hypothesis-generating and one cannot adjust for some confounding factors. Therefore, we need more randomised controlled trials, like the PRAMI trial, in order to adopt the concept of acute multivessel PCI in ACS. In Table 1 a summary of ongoing randomised trials in multivessel STEMI patients is given. Furthermore, a more tailored approach with FFR and plaque vulnerability detection (virtual histology, OCT and near-infrared spectroscopy) for the non-culprit lesions is also a very attractive approach. 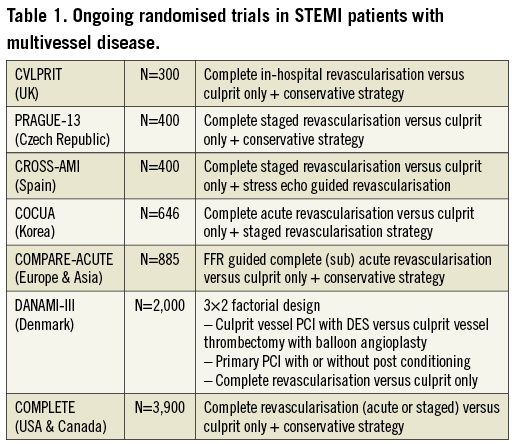 Until then, I think we have to be patient and conservative regarding “what to do and when” with the non-culprit lesions.

P.C. Smits is principal investigator for the COMPARE-ACUTE trial, and has received speaker fees from Abbott Vascular and a consultant fee from St. Jude Medical.