The drug-coated balloon (DCB) is an attractive alternative to a drug-eluting stent (DES) for in-stent restenosis (ISR)1 and de novo small vessels2. However, the large profiles of DCBs make drug delivery to the lesion difficult. Because the additive effect of DCB over a plain balloon is derived only from the antiproliferative drug3, we hypothesised that the adjunctive use of a guide extension catheter (GEC) might enhance the efficacy of the DCB by preventing drug loss and improve the clinical outcomes.

This before-and-after cohort study included patients who underwent DCB angioplasty at Ogaki Municipal Hospital. Between February 2016 and August 2017, we attempted to use a GEC for all patients undergoing DCB angioplasty, if not contraindicated by medical (such as proximal stenosis) or pecuniary (not covered medical insurance) reasons. In total, 79 consecutive patients with 94 lesions during that period were designated as the GEC group (excluding 38 patients without adjunctive use of GEC); 83 consecutive patients with 93 lesions treated with DCB without adjunctive use of GEC in the preceding two years were designated as the no-GEC group (excluding five patients with use of GEC and one with life expectancy <1 year).

We compared the composite clinical outcomes of cardiac mortality, non-fatal myocardial infarction (MI), and target vessel revascularisation (TVR) at 12 months between the two groups. TVR was defined as repeat revascularisation of the target vessel accompanied by symptoms or objective signs of ischaemia. MI was defined according to the 4th universal definition4. This study was approved by the Research Review Board of Ogaki Municipal Hospital.

The SeQuent Please® paclitaxel-coated balloon catheter (B. Braun Melsungen AG, Berlin, Germany) and the GuideLiner® (Vascular Solutions Inc., Minneapolis, MN, USA) were used in all patients. The GEC was pre-positioned across or just before target lesions, then the DCB was delivered. 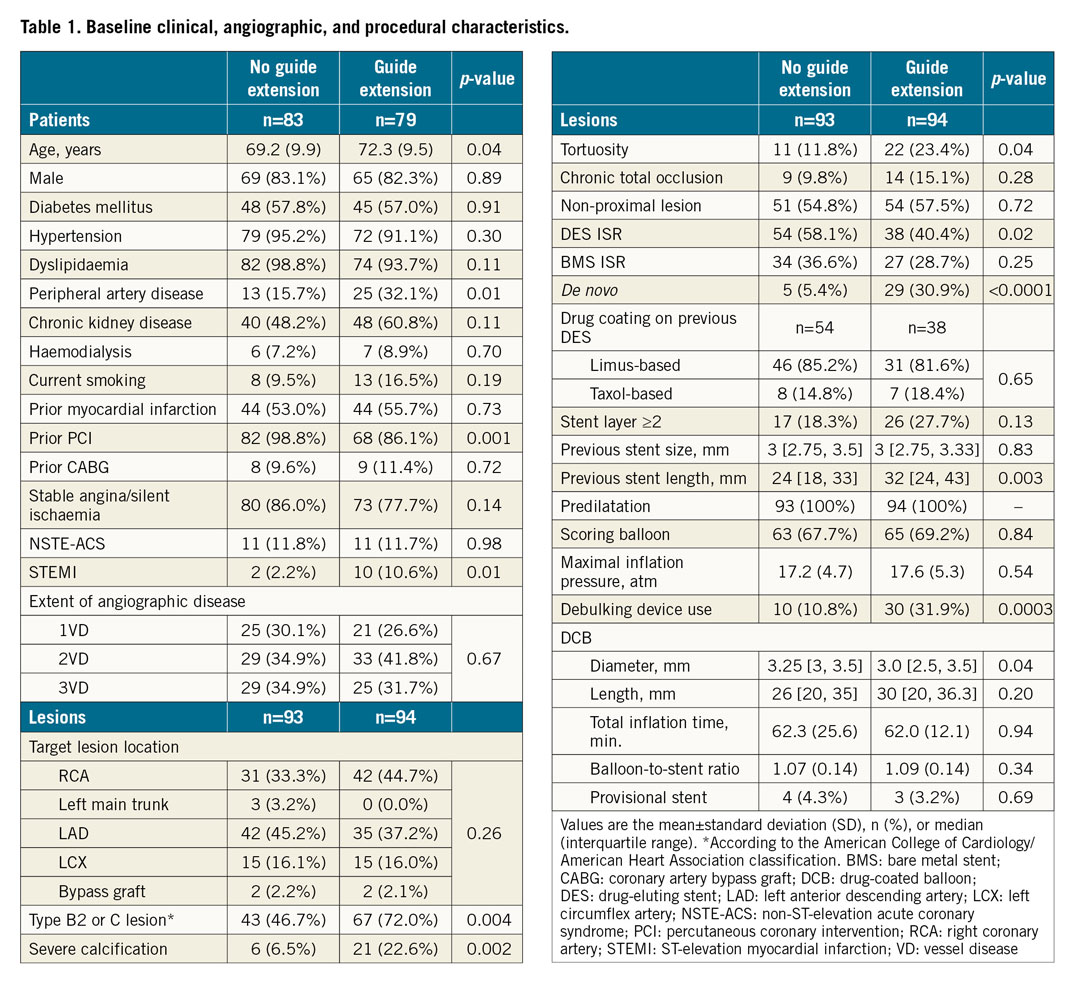 Angiographic data are shown in Table 2. No significant differences between the two groups were found, which is discordant with the incidence of target lesion revascularisation (TLR); however, the proportion of binary restenosis was numerically higher in the no-GEC group. Among 23 patients with TVR, 17 were TLR including two with ischaemia and symptoms but 50% stenosis angiographically (both in the no-GEC group). Of six TVR not involving the target lesion, five were progression of proximal atheroma (three in the no-GEC group, two in the GEC group). 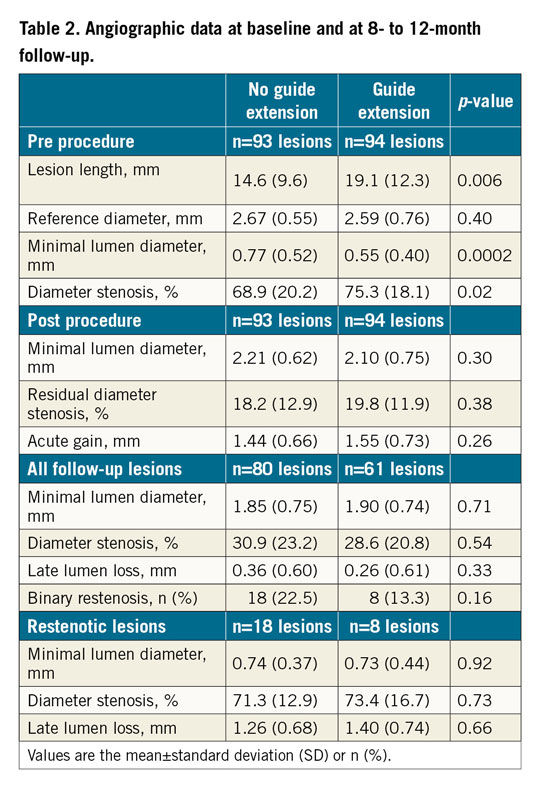 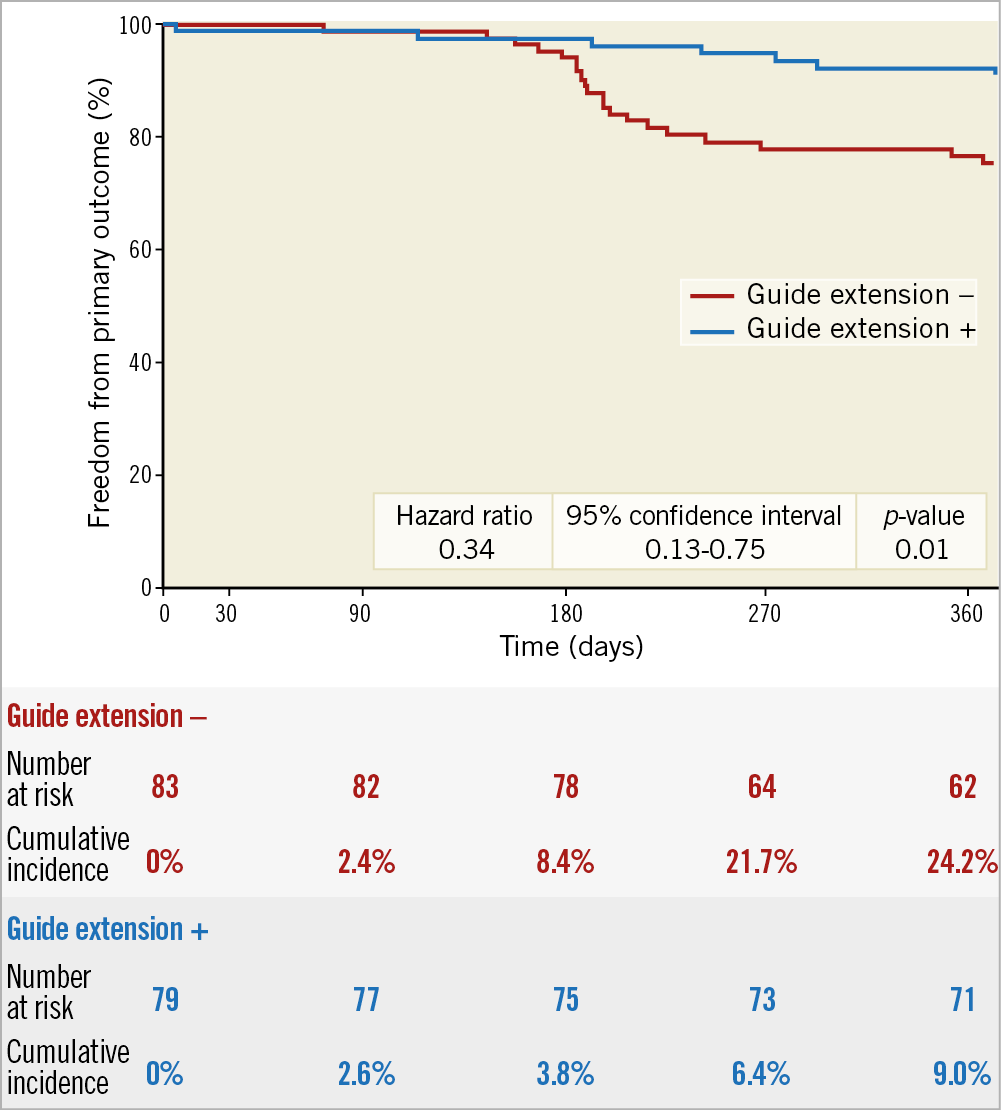 We found that the adjunctive use of a GEC showed superior clinical outcomes at one year. Both treatment strategies showed a high clinical safety profile with comparable low cardiac death and MI up to one year.

The drug pharmacokinetics of contemporary DCBs could be insufficient to offer a potent antiproliferative effect5. This has led to attempts to maximise drug delivery, such as scoring balloon use and procedure optimisation3,6. In addition to modifying drug infiltration into the local vessel wall, we sought to deliver a DCB rapidly and smoothly to prevent drug loss by the adjunctive use of a GEC. The rationale for this was to achieve a shorter delivery time and a lesser degree of drug loss through vessel wall friction.

Although MI due to GEC-induced atheroma progression is a great concern, the result of our study demonstrated the safety of adjunctive use of a GEC.

This was a retrospective pilot study. Eventually, this hypothesis needs to be tested in a prospective trial with proper randomisation. The prevalence of DES ISR was higher in the no-GEC group. In addition, new-generation DCBs with better deliverability might reduce the benefit of the GEC.

In patients undergoing DCB angioplasty, adjunctive use of a GEC was associated with a reduced incidence of the composite of cardiac death, non-fatal MI, and TVR.