Methods and results: From January 2007 to December 2011 all patients with severe symptomatic aortic stenosis undergoing TAVI at our institutions were included in the present study, and were divided into two cohorts according to their gender. All endpoints were adjudicated according to VARC definition. Three hundred and seventy-seven patients were included: 161 male and 216 female. Male patients reported higher rates of previous coronary revascularisation, while both ejection fraction and mean aortic gradient were higher in female patients. At 30 days, rates of cardiovascular death were similar (6.0% vs. 8.1%; p=0.793), while overall bleedings (44% vs. 25%; p=0.024) and life-threatening bleedings (21.1% vs. 12.7%, p=0.016) were higher in female patients, also after multivariate analysis (OR 3.44; 1.23-9.22, and OR 2.1; 1.1-4.0, CI: 95%, respectively). Major vascular complications showed a tendency to be higher in female patients (12.9% vs. 9.8%, p=0.449). At a mean follow-up of 490±250 days, no significant difference was reported between men and women for all endpoints, and after multivariate adjustment only life-threatening bleeding was reported as a predictor of death (OR 8.2:3.8-17, CI: 95%).

Conclusions: TAVI can be an effective and safe strategy in high surgical risk patients, regardless of the gender; life-threatening bleedings were reported more frequently in female patients, being the only independent predictor of death.

Aortic stenosis has become the most common heart valve disease and has been extensively studied in recent years. Among other things, it is characterised by pathophysiological gender-related differences: female patients with aortic stenosis (AS) develop a greater degree of left ventricle hypertrophy and higher relative wall thickness1,2.

The effect of these baseline pathophysiological features on outcomes after surgical aortic valve replacement has been investigated in many reports. Female gender was associated with an increased risk for cardiac morbidity but not for mortality after adjusting for confounding baseline variables3-6.

Recently, transcatheter aortic valve implantation (TAVI) has been shown to be a feasible strategy for both surgery-ineligible and high-risk eligible patients with severe symptomatic aortic stenosis (AS). In the randomised PARTNER A trial female patients undergoing TAVI showed a tendency towards better outcome at one year7,8. Recently, a multicentre registry showed that, at one year, female sex was a predictor of major vascular complications with females requiring more transfusions, while data at longer follow-up are still lacking9.

Thus we analysed short and medium-term clinical outcomes of patients undergoing TAVI in a real-world experience.

From January 2007 to December 2011 all consecutive patients with severe symptomatic AS referred for TAVI at our Institutions (San Giovanni Battista Hospital, Turin, Italy; Ferrarotto Hospital, Catania; Istituto Clinico Sant’Ambrogio, Milan, Italy) were included in the present study. These patients were divided into two cohorts according to their gender. Their baseline, procedural and follow-up features and data were prospectively recorded in dedicated registries; data about gender differences were retrospectively analysed.

In each centre, indication for TAVI was appraised after consensus by a team of cardiac surgeons, cardiologists and anaesthetists. Coronary anatomy and haemodynamic status were assessed by coronary angiography, left and, when necessary, right heart catheterisation. Valvular anatomy and annulus dimension were evaluated with transthoracic and transoesophageal echocardiography (including three-dimensional reconstruction), contrast angiography of the aortic root, and multislice computed tomography of the thoracic aorta. The vascular access site was assessed by colour-Doppler sonography and multislice computed tomography with contrast angiography of the aortoiliofemoral system.

A transfemoral, transsubclavian or transapical approach was used according to each centre’s experience, with implantation of CoreValve and Edwards SAPIEN devices; surgical closure was performed for transfemoral access.

Short and mid-term outcomes with at least six months of follow-up were recorded by phone, formal query to primary physicians and ambulatory visits.

Continuous variables are expressed as mean±standard deviation and were compared with ANOVA. Categorical variables are presented as counts and percentages and were compared with the chi-squared test. Due to no differences in follow-up, a parsimonious model of logistic regression11 was performed to evaluate independent predictors of events with significant differences at univariate analysis; the calibration was evaluated by the Hosmer-Lemeshow test. For long-term all-cause death, Cox multivariate regression analysis was performed, with all variables showing a significant difference at baseline and at 30-day follow-up. Statistical significance was set at the two-tailed 0.05 level. Computations were performed with SPSS 11.0 (SPSS, Chicago, IL, USA).

Three hundred and seventy-seven patients were included: 161 male and 216 female.

Their baseline features are summarised in Table 1: women were older, with smaller body surface area, while male patients reported significantly higher rates of previous percutaneous or surgical revascularisation, of carotid and peripheral arterial disease and of chronic obstructive pulmonary disease. 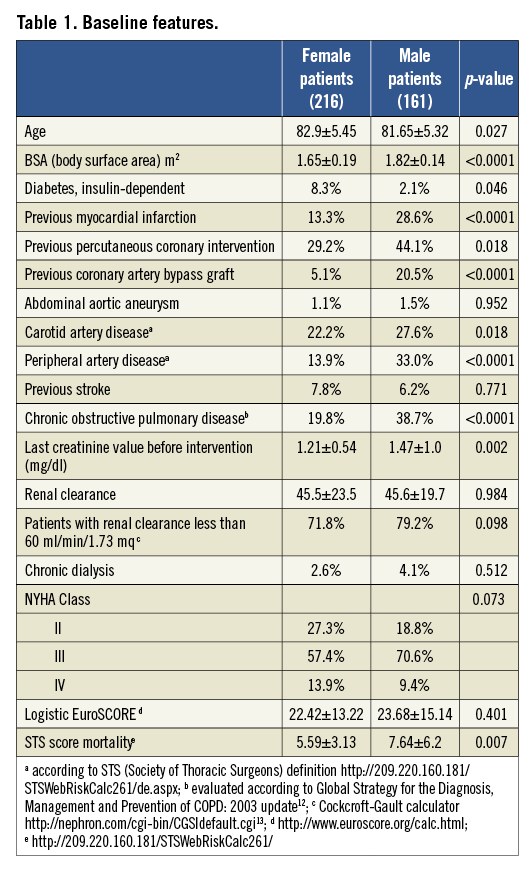 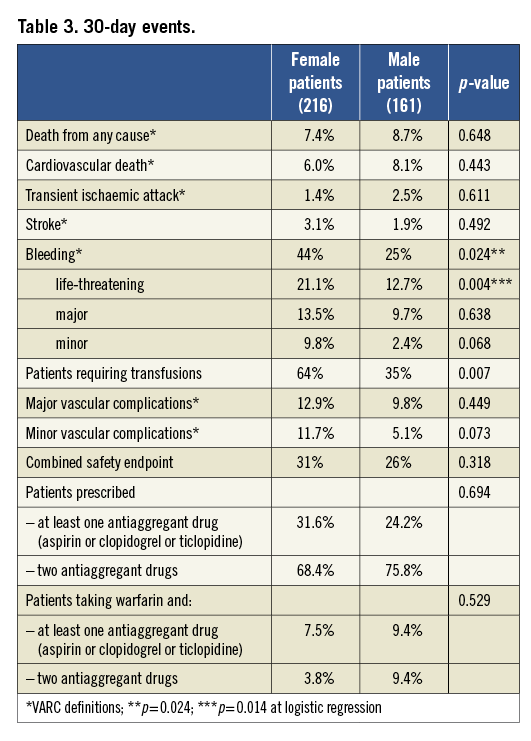 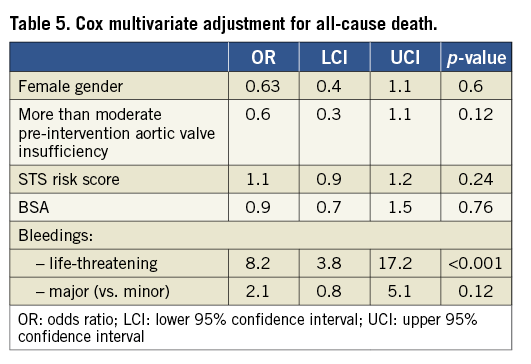 At a mean follow-up of 490±250 days, there was a trend towards a lower rate of cardiovascular death in females (10.8% vs. 18.8%, p=0.07), while the incidence of stroke was higher but not statistically significant (1.9% vs. 4.2%, p=0.21). Also paraprosthetic aortic valve insufficiency was more frequent in female patients, although not statistically significant (64.4% vs. 58.8%, p=0.09). No significant differences were reported for other endpoints (Table 4 and Table 5). At Cox multivariate adjustment, only life-threatening bleedings were an independent predictor of all-cause death (OR 8.2:3.8-17, CI: 95%,). 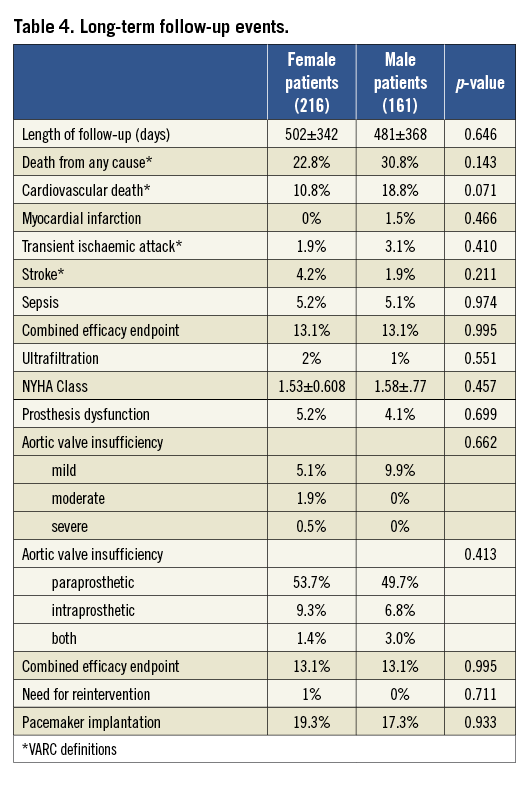 The main findings of this multicentre observational registry after a midterm follow-up are: a) ejection fraction and mean aortic gradient were higher in female patients, while no differences were found in symptoms; b) clinical presentation of male patients was burdened by higher rates of previous cardiovascular events; and c) life-threatening bleedings were more frequent in female patients, affecting medium-term rates of cardiovascular death significantly.

Our study is the first to demonstrate that life-threatening bleedings were more frequent in women, also after multivariate analysis, leading to a higher need for transfusions and being an independent predictor for death at midterm. Data about higher rates of transfusions are similar to those reported by Buchanan et al9, probably being related to smaller BSA and the older age of female patients in both these registries. These data were comparable to those reported in recent multicentre registries of PCI (percutaneous coronary intervention)14,15, in which female gender was associated with augmented hazard. In these reports older age and ejection fraction were other independent predictors of bleeding, potentially explaining more frequent rates of bleedings in our population and stressing the need for a careful management of vascular access, for early identification of high-risk bleedings. Moreover, the transapical approach was significantly related to bleedings; similar data were also reported in another multicentre registry16, probably strictly connected to the more invasive approach. Interestingly, our data are similar to those of Hayashida et al17 in which transfusions were related to adverse events. In the present registry, life-threatening bleeding was an independent predictor of death at midterm follow-up, probably representing a marker of frailty, independently from gender.

The higher but not significant incidence of cardiovascular death among male patients was probably related to the balance between their worse clinical presentation with the higher incidence of coronary artery disease in males, and the short-term complications, mainly bleeding, in females. Contrasting data are reported in the literature about gender differences in interventional procedures. In the setting of coronary artery bypass grafting, women often presented with a worse baseline profile18-20, and were reported to suffer increased postoperative morbidity and mortality19,23. In aortic valve disease, a similar poorer presentation did not affect long-time survival4,5. In our study, on the other hand, male gender was more frequently burdened by coronary or carotid disease, and had a shorter life expectancy: this probably mirrors the different selection of patient candidates for TAVI from those candidates for surgical approach. Similar data are reported in the recent French registry17.

This study has several limitations. The main limitation is the observational design, because differences in baseline characteristics or in selection criteria, that might not have been recorded, could have affected the present results. Moreover, we analysed data from three hospitals, thus leading to a lower analytical bias, but to a difference in attrition and adjudication of events.

In this TAVI multicentre registry rates of cardiovascular death were similar in male and female patients. Males generally have a higher risk profile then females, which might increase mortality slightly at midterm follow-up. Life-threatening bleedings were more frequent in female patients without an impact on mortality.