Objective: To evaluate the safety of heparin neutralisation by protamine immediately after PCI.

Results: The rates of stent thrombosis, non-fatal myocardial infarction and in-hospital mortality were similar in the two groups. The rate of puncture site complications were 4,7% in group 1 and 2,6% in group 2 (p<0,001).

Conclusions: Circulating heparin can be safely neutralised by protamine sulphate immediately after PCI.

In percutaneous coronary intervention (PCI) intensive antithrombotic therapy reduces thrombotic events and increases the risk of bleeding complications. A well know problem is bleeding at the femoral puncture site1,2. Therefore, femoral sheaths have usually been removed, when the activated clotting time (ACT) was normalized, often hours after the procedure. Since early sheath removal would shorten bed rest, minimize patient discomfort and make early discharge possible, a variety of closure devices have been introduced, low-level heparinization procedures have been suggested, and the radial approach has been used3-6. A few series with rather few patients have recommended neutralization of heparin by protamine, sheath removal and manual compression at the puncture site immediately after the procedure7,8.

We adopted this strategy by January 2000, and in the present study we compared in-hospital complications in angina pectoris patients treated one year before and 3 years after the adoption of this strategy. The purpose was to evaluate the safety of heparin neutralization in a large cohort of patients. 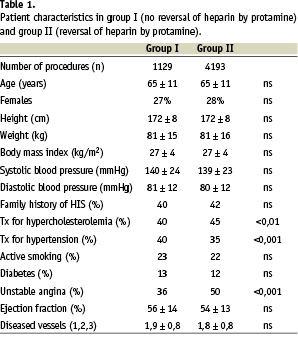 Before the PCI procedure the patients were premedicated with Aspirin 150 mg daily. During the procedure a weight adjusted bolus of heparin (75-100 units/kg) was given without routine control of the activated clotting time. A 300 mg bolus of clopidogrel was given immediately after the procedure and continued with 75 mg daily for one month in patients with stable angina and for 3 months in patients with unstable angina. Glycoprotein IIb/IIIa (GPIIb/IIIa) inhibitors were administered at the discretion of the operator. Heparin dose in patients treated with GPIIb/IIIa inhibitor was 75 IU/kg. The femoral approach and 6F guiding catheters were used. One or more stents were implanted in 86% of the procedures. In group I, the femoral sheath was removed in the ward by the cardiology resident four hours after the PCI procedure, and followed by another 4 hours bed rest. In group II, the activated clotting time was measured and protamine sulfate administered immediately after the procedure as indicated in table 2. Subsequently, the sheath was removed by the PCI operator, hemostasis achieved by manual compression and the patient ambulated two hours later.

The study was approved by the Danish Data management Council.

Data was collected prospectively in the Heart Database of Western Denmark and included pre-procedure clinical data, procedural data and data during the hospital admission. Continuous variables were expressed as mean value + SD, and discrete variables as absolute values and percentages. Clinical and angiographic variables in the two groups were compared using the Student’s t- and chi-square tests.

The two groups of patients had similar clinical characteristics with the exception of a lower prevalence of cholesterol lowering therapy and a higher prevalence of hypertension in group I than in group II. Also, there were significantly more patients with unstable angina, and more lesions were treated with stent in this group (table 1). Procedural data and in-hospital complication rates are given in table 3. While GP IIb/IIIa inhibitors were used in a similar percentage of the patients, and the number of treated vessels and lesions were the same in the two groups, procedural time, fluoroscopic time, use of contrast and length of hospital stay were significantly lower in group II. 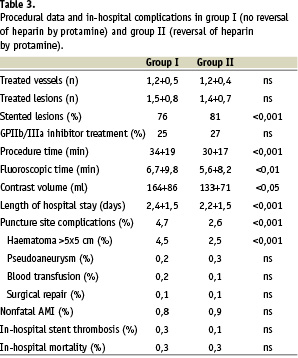 The subgroup of patients with only one PCI procedure was analyzed separately. This analysis gave the same result as the analysis of the total number of treatments.

This paper reports the results of heparin neutralization and immediate sheath removal after PCI in a large cohort of consecutive, non-selected angina pectoris patients. We found that this strategy could be safely used and was associated with a reduced risk of puncture site complications.

Protamine neutralization of circulating heparin has been proposed in earlier studies. In 1997 Pan et al. randomized 228 consecutive patients with successful stent implantation to protamine administration 2 mg/ kg and in-laboratory sheath removal, and showed that heparin could be safely reversed by protamine immediately after stent implantation7.

Later Kereiakes et al. found that heparin could be safely reversed by

by protamine administration because of bleeding complications and found no risk of stent thrombosis in the patients10. In 50 patients with a single totally occluded vessel treated with phosphorylinecholine coated stents Kuiper et al. showed, that protamine heparin reversal could be done safely11. In these studies all patients were treated with stents7,9,10,11. The present study included 14% non-stented patients, as in a recent stud by Ducas et al., where heparin was safely reversed in 429 consecutive patients, of whom 85% were treated with stent and 12% with abciximab8. Thus heparin reversal seems safe both in stented and in non-stented patients.

PCI with femoral approach is most frequently followed by an eight to ten hours bed rest, as in the control group of the present study. Early sheath removal reduced bed rest to two hours. Thus, patient discomfort can be reduced by enabling earlier ambulation and possibly earlier discharge. Use of the radial approach or closure devices or low-level heparinization are attractive alternatives to protamine neutralization and immediate sheath removal, but may be associated with disadvantages such as problems with >6F guiding catheters, radial artery closure and increased costs3,6,12,13.

There are important limitations to the present study. The historical control group of the present study differed significantly from the protamine group. Although, important prognostic parameters such as age, sex, diabetes and GPIIb/IIIa inhibition were similar in the two groups, more patients were treated for unstable angina, more lesions stented and there were shorter procedure/fluoroscopic times and less use of contrast in the protamine group. The shorter procedures may have influenced our findings of a reduced puncture site complication rate and may have had an impact on the rate of in-hospital complications. Thus, our data are not suggestive of any risk by immediate protamine administration and sheath removal following PCI.

Data registration was done prospectively via a dedicated PCI database and included pre procedural and procedural data and data at discharge.

In conclusion, we found that circulating heparin can be safely neutralized and sheath removed immediately after PCI. This strategy enables early ambulation after PCI and is a simple alternative to radial PCI or to costly femoral artery closure devices.