Methods and results: Patients (n=33) with high-grade symptomatic carotid stenosis were treated with CAS. Two different methods of cerebral embolic protection were used. In 23 patients, a filter device was placed in the distal internal carotid artery. In 10 patients a protection system based on the reversed-flow principle was used. DWI was performed before and after CAS. The number and volume of new hyperintense lesions in the ipsilateral hemisphere were assessed.

No stroke or death was recorded. Twenty-three new hyperintense lesions in the ipsilateral cerebral hemisphere were recorded on the post-treatment DWI-series after stent placement in 12 of the 33 procedures (36%). In 8 of the 23 procedures (35%) performed with a filter device and in 4 of the 10 procedures (40%) performed with the reversed-flow device new hyperintense lesions were revealed (13 and 10, respectively). No significant differences were found in the number of lesions and lesion load. The volume per lesion was significantly smaller in the patient group treated with reversed-flow device in comparison to the patient group treated with a filter device (median 0,048 mm3 and 0,013 mm3, respectively; p=0.03).

Carotid artery stenting (CAS) is gaining importance as an alternative to carotid endarterectomy (CEA) in the treatment of patients with symptomatic atherosclerotic disease of the carotid artery. One of the feared problems of the stenting procedure is cerebral embolisation of atheromatous debris. Transcranial doppler studies showed more emboli during CAS compared to carotid endarterectomy (CEA)1-4. To reduce acute neurological complications related to distal embolisation of these particles several cerebral protection devices have been developed.

Diffusion-weighted MRI (DWI) of the brain is a very sensitive technique for detecting symptomatic and even asymptomatic ischaemic lesions8-10 and could therefore be a potential outcome measure in CAS. The aim of the present study is comparison of the effectiveness of different cerebral protection devices with DWI-assessed ischaemia as the main endpoint.

Since February 2001 till May 2004, all patients with a significant symptomatic carotid stenosis (≥70%) were informed about both CAS and CEA. The surgeon explained the risks and benefits of the CAS procedure and offered this treatment as an alternative for CEA. From February 2001 until April 2004 DWI before and after carotid intervention was performed in 33 patients with symptomatic carotid artery disease. In 42 patients, DWI was not performed before and after the intervention for various reasons: 1) the MRI scanner was not available within the time frame of 48 hours; 2) refusal to participate in the study; 3) standard contraindications for MRI, including claustrophobia.

All patients underwent neurological examination before and 24 hours after the procedure. Stroke was defined as major in case of a modified Rankin grade ≥3 and as minor in case of grade <311. Data on cardiovascular risk factors were collected.

The CAS procedures were performed under local anaesthesia by an experienced team consisting of an interventional radiologist and a vascular surgeon. After placement of a guiding catheter in the common carotid artery and administration of 5000 IU of heparin intravenously, angiography of the symptomatic artery was performed to ensure that the local situation has not been changed. In the majority of patients the lesion was predilated with a 3 or 4 mm diameter coronary balloon. The stents were placed and subsequently postdilated with a 5-6 mm diameter balloon, depending on the diameter of the internal carotid artery as determined with ultrasound prior to the procedure. Self-expanding stainless steel and nitinol stents were used (Table 1). 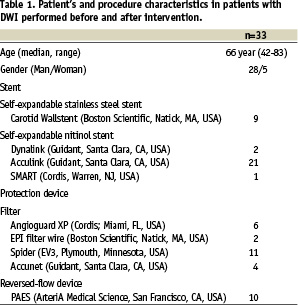 Finally, an angiogram of the treated carotid artery and of the intracranial circulation was obtained. Several methods of cerebral embolic protection were used (Table 1). In 23 patients a filter device was placed in the internal carotid artery cranial of the stenosis. In 10 patients the protection system based on the reversed flow principle was used. Antithrombotic medication consisted of 80 mg aspirin daily for life, and clopidogrel was added one day before stent placement (300 mg) followed by 75 mg daily for one month.

MR imaging of the brain was performed before and after treatment by means of a 1.5T scanner (Signa, General Electric, Milwaukee, WI, USA) with a standard head coil. The MRI protocol consisted of a DWI sequence with a slice thickness of 5 mm and b-value of 1000 s/mm3 (SE/EPI, TR 12999, minimum TE, FOV 24x19 cm, matrix 128x160, 3 NEX) and a FLAIR sequence. The diffusion-weighted images were acquired with diffusion sensitisation gradients successively activated in three orthogonal directions, and isotropic (trace of the tensor) images were generated and analysed.

The DW images performed after the intervention were compared with those acquired before intervention. New hyperintense lesions in the ipsilateral hemisphere on the DW images were defined as new ischaemic lesions. The number and volume (cm3) of these lesions were assessed by two experienced radiologists and in case of disagreement consensus was reached. Ipsilateral lesions were defined as supratentorial lesions at the side of the treated carotid artery. Analysis was focussed on new ipsilateral lesions, because these lesions could be related to the type of protection device.

To calculate the volume of the hyperintense lesions on DWI, a semi-automated segmentation software was developed using Matlab® (The Math Works Inc)12. Two interactive methods were used to start the automated segmentation of the lesion. For large, clearly visible lesions a box could be drawn around the lesion. For small lesions with low contrast, a seed was placed in the lesion. Automatically, a threshold was determined based on the local gradients in the volume surrounding the lesion. Using a 3D region growing technique based on pixel intensities and local gradients method, the lesion was segmented and the volume calculated.

Differences between categorical data were analysed with a Chi-squared test and continuous data with a Mann-Whitney test. A p-value < 0.05 was considered significant.

Thirty-three patients underwent a MRI before and after the procedure. The neurological status of the patients was unchanged after the CAS procedure: no minor or major stroke or death was encountered. In the 42 patients not studied with DWI, two minor strokes and one major stroke were encountered. Clinical and procedural characteristics did not differ significantly between the group treated with a filter device and the group treated with the reversed flow device (Table 2).

Table 3 summarises the number of patients with new hyperintense DWI lesions, and the number of lesions subdivided over the different types of protection devices. 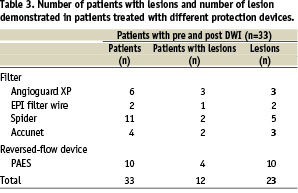 The above-mentioned results strongly suggest that thromboembolic complications are reduced with the use of cerebral protection devices. But which protection system should we use?

Continuous refinement in the carotid stenting techniques has prompted the development of various cerebral protection devices to capture embolic thrombi and atheromatous debris caused by this treatment. Individual clinical trials report complication rates of studies in which various protection devices have been used.9,16-19 In addition, several groups have reported complication rates in studies where a specific protection device has been used.20,21 No randomised studies are known to exist comparing different types of cerebral protection devices. Large number of patients will be needed for these studies where the endpoint are clinical outcomes like stroke and death rate. For example, to prove that a new device will decrease the complication rate from 4% to 2% with a power of 0.80 and an α of 0.05, 2,478 patients have to be included.

Asymptomatic or “silent” ischaemic cerebral lesions detected with diffusion-weighted magnetic resonance imaging (DW-MRI) have been reported more frequently than clinical events after carotid interventions.22-26 The most likely cause of new hyperintense lesions is embolisation of thrombotic or atherosclerotic plaque material to the cerebral circulation. When ischaemic brain lesions demonstrated with DW-MRI are used as a surrogate outcome measure a lower number of patients are needed in the comparison of protection devices. For this reason we evaluated our series of CAS procedures. During the last years different protection devices were used in our hospital, which enables a comparison in the frequencies of DW-MRI lesions. The rate of new hyperintense lesions (36%) detected in this study falls beyond the 21% to 37% range previously reported10,22,27. To prove that a new protection device will decrease the frequency of DW-MRI lesions from 40% to 20% with a power of 0.80 and an α of 0.05, 182 patients have to be included.

The majority of the lesions were located in the ipsilateral hemisphere, which suggests manipulation prior to, during, or after stent placement as the most probable cause of these lesions. It may be expected that reversed flow protection would cause less embolic lesions and therefore less DW-MRI lesions because the stenotic lesion does not have to be passed, but the number of lesions and the lesion load was equal and not different for the two protection systems. A possible explanation for this could be that catheter manipulation with the reversed flow device in the aortic arch is more difficult compared to manipulation with the other used guiding catheters and therefore carries a higher risk of embolisation prior to proper cerebral protection. To confirm this argumentation, we would expect to see more contra- and infratentorial lesions in this group. However, new infratentorial lesions were scored in two patients only, one after protection with a filter, and the other after protection with the reversed flow device.

The volume of individual lesions demonstrated after protection with the reversed flow device was smaller compared to the filter devices. We do not have a good explanation for the differences in volume of the individual lesions. The clinical and procedural variables did not differ significantly between the two groups and no relation was found between these variables and the volume of the individual lesions. To investigate the role of these variables larger groups of patients are needed. The filter devices protect the brain from lesions after passing the stenotic lesion and the reversed flow device facilitates cerebral protection prior to manipulation of the lesion. Maybe larger brain lesions are caused by detachment of atheromatous debris during passing the stenotic lesion with a filter device at the start of the procedure. Orlandi et al reported the incidence of microembolism during different phases of angioplasty and CAS detected with transcranial Doppler imaging28. They found that the crossing of the stenosis with a guidewire resulted already in a significant number of microemboli. In addition, during the phase of guidewire crossing neurological complications occurred in two of the 41 procedures. To assess the effectiveness of different protection devices, we compared the ipsilateral lesions in the vascular territory of the treated artery only. For the final evaluation of protection devices, the total lesion load in the brain is more important. Re-analysis with all detected new lesion revealed similar results.

It is not known whether subclinical DW-MRI lesions seen after carotid intervention will produce structural damage to the brain, nor is it known whether these lesions may cause neuropsychological deterioration. Previous studies have revealed an increase in neuropsychometric changes after carotid endarterectomy, which may have been mediated by silent infarcts29,30. In addition, Vermeer et al recently found that silent brain infarcts are associated with cognitive dysfunction in the general population, so these silent lesions may become a valuable outcome measure in clinical trials of CAS31.