Central sleep apnoea syndrome (CSA) is a variant of sleep-disordered breathing (SDB), in which airflow and ventilatory effort are absent. CSA occurs in up to 40% of patients with chronic heart failure (HF), and is a powerful independent predictor of increased mortality in these patients1. A recent study reported a similarly high incidence of CSA (35%) in patients with severe aortic stenosis2. The pathophysiological links between advanced cardiac disease and CSA are complex and not yet fully understood3. To investigate the mechanisms by which these conditions are linked, an experimental model in which haemodynamic parameters can be changed rapidly would be desirable. The recently developed method of transcatheter aortic valve implantation (TAVI), for use in patients with severe aortic stenosis who are at high surgical risk, is a minimally invasive procedure that can improve the haemodynamic condition of the patient considerably and almost instantaneously4. The purpose of the prospective observational study described herein was to investigate the impact of TAVI on CSA in patients with high-grade aortic stenosis.

Forty-three consecutive patients with high-grade aortic stenosis who were scheduled for TAVI at our centre were screened prospectively using polygraphy between 2010 and 2011. Seven patients died after TAVI but before the three-month follow-up period was completed, seven patients refused to undergo follow-up polygraphy at three months, and 29 patients completed the three-month follow-up and were included in the study (Figure 1). The indications for TAVI corresponded to the current recommendations of the European Society of Cardiology5. The exclusion criteria for the study were known SDB, long-term O2-therapy, and high-grade mitral valve disease. The study was approved by the local medical ethics committee, and informed consent was obtained from all patients. All patients underwent our standard preoperative diagnostic tests, which include comprehensive 2-D and 3-D transthoracic and transoesophageal echocardiography (Philips iE33 ultrasound system; Philips Medical Systems, Amsterdam, The Netherlands) and coronary angiography6. Left ventricular end-diastolic and end-systolic volumes, ejection fraction (LVEF), and left atrial volume were determined by 2-D echocardiography. Right ventricular systolic pressure was estimated on the basis of the modiﬁed Bernoulli equation, and was considered equal to the systolic pulmonary artery pressure (sPAP), as described elsewhere7. The TAVI procedure was performed via transfemoral access as described previously8, with the third-generation 18 Fr CoreValve prosthesis (CoreValve Revalving Technology; Medtronic, Minneapolis, MN, USA; 14×26 mm, 12×29 mm, 2×31 mm) in 28 patients. One patient received an Edwards SAPIEN valve prosthesis (Edwards Lifesciences, Irvine, CA, USA). Deep sedation was achieved with midazolam as continuous i.v. infusion (5-10 mg/hr and boli as needed) and fentanyl i.v. (0.1 mg and subsequent boli as needed). Left ventricular end-diastolic pressure (LVEDP) was measured invasively before and immediately after TAVI. Echocardiography and measurement of laboratory values were repeated immediately after the procedure, before discharge and at the three-month follow-up. 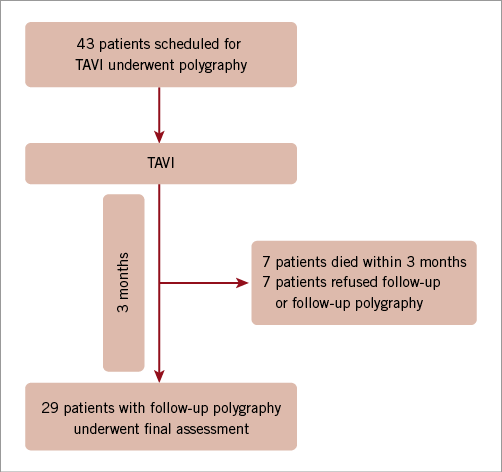 Sleep studies were performed by ambulatory polygraphy before and three months after TAVI. The inclusion polygraphy was performed as unattended in-hospital polygraphy during the screening period before TAVI. The follow-up polygraphy examination at three months was performed on an outpatient basis. Patients were instructed in how to attach the device and they performed the polygraphy at home. An Embletta polygraph (Embla Ltd, Amsterdam, The Netherlands), which records nasal pressure and airﬂow, chest and abdominal wall movements, oxygen saturation, and heart rate continuously, was used for all recordings. Episodes of disordered breathing were categorised as apnoea or hypopnoea, and as either obstructive or central. Apnoea was defined as a cessation of airflow, or a >90% reduction in airflow from baseline for >10 seconds. Hypopnoea was defined as a reduction in airflow of >30% with an oxygen desaturation of ≥4%. The apnoea-hypopnoea index (AHI) was defined as the number of episodes of apnoea and hypopnoea per hour. Patients with an AHI >5/hr were considered to have sleep-disordered breathing (SDB)9, which was subclassified into mild, moderate, and severe SDB, with 5-14.9, 15-29.9, and ≥30 events/hour, respectively. Events were scored manually by an experienced sleep laboratory specialist. They were classified as obstructive when the airflow criteria were met and thoracic or abdominal respiratory effort was documented; otherwise they were classified as central. A patient with SDB who experienced more than 50% of central events was defined as having CSA, whereas, if >50% of events were obstructive, he was defined as having obstructive sleep apnoea (OSA). Mixed apnoea was defined as an absence of nasal airflow associated with no respiratory effort, followed by obstructive components. These events were classified in the OSA group10. The central apnoea index (CAI) and obstructive apnoea index (OAI) were calculated as the mean number of episodes of central and obstructive apnoea per hour, respectively. Sleep-related symptoms were documented with the German version of the self-rating Epworth Sleepiness Scale questionnaire (ESS)11. A number in the range 0-9 is considered to be normal, whereas a number in the range 10-24 indicates daytime sleepiness12.

Continuous variables are expressed as the mean±one standard deviation and were analysed by a two-sided paired or unpaired Student’s t-test, as appropriate. For values of N-terminal pro-B-type natriuretic peptide (NT pro-BNP) with a highly skewed distribution, statistical signiﬁcance was calculated using the Wilcoxon-Mann-Whitney test. Categorical variables were compared by means of Fisher’s exact test or the chi-square test for trend, as appropriate. Correlation between measures was calculated using Pearson’s or Spearman’s rank correlation, as appropriate. Statistical analyses were performed with SPSS software version 18.0 (IBM Inc., Armonk, NY, USA) and MedCalc software version 12.1.4 for the chi-square test for trend (MedCalc Software, Mariakerke, Belgium). A p-value of <0.05 was considered statistically significant. 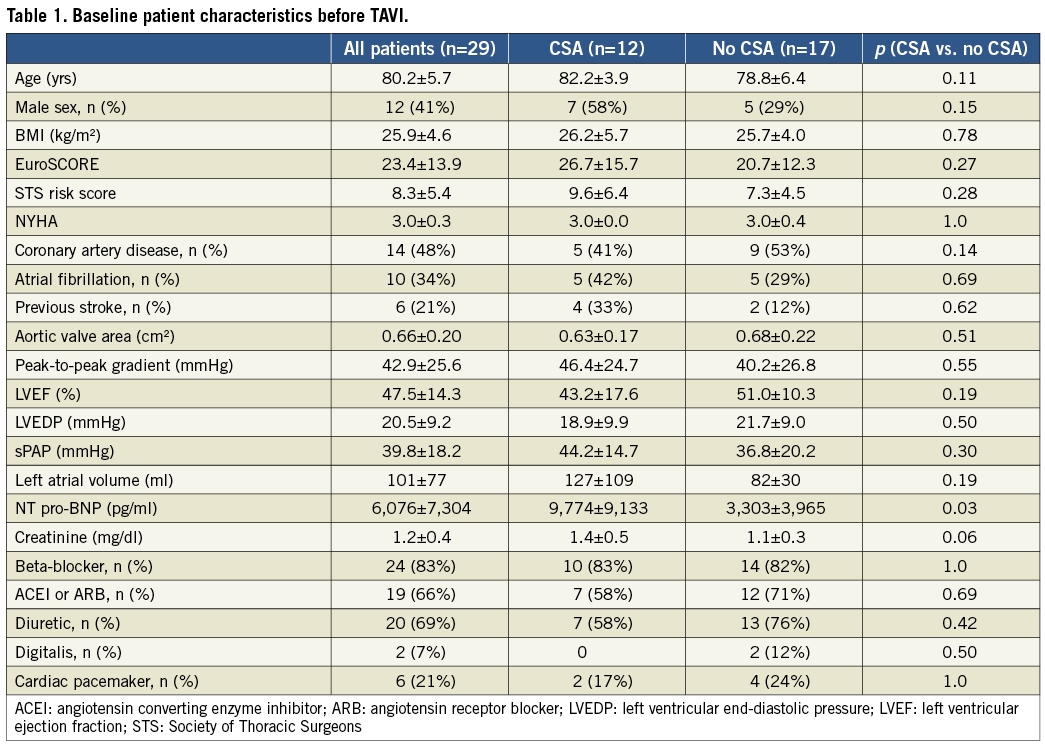 CLINICAL AND HAEMODYNAMIC RESULTS OF TAVI

PREVALENCE OF SLEEP-DISORDERED BREATHING AT BASELINE

IMPROVEMENT OF SDB AND CSA AFTER TAVI 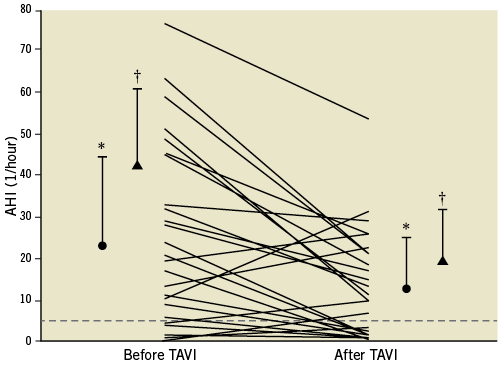 Figure 2. Improvement of apnoea-hypopnoea index (AHI) after transcatheter aortic valve implantation (TAVI) in patients with and without central sleep apnoea (CSA). The dotted line represents the threshold of a normal AHI.

mean+SD of patients with CSA before TAVI; 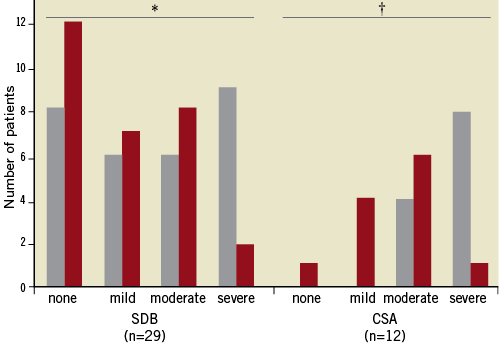 This is the first study to investigate systematically the relationship between severe aortic stenosis and SDB in patients undergoing TAVI. The main findings are: (1) there is a high prevalence of SDB (72%) in this patient cohort, with a preponderance of CSA (41%) that accounted for all cases of severe SDB (8/21 patients); and (2) after TAVI, prevalence and severity of SDB were reduced from 72% to 59%, triggered by the significant improvement of CSA, as reflected in the decrease of CAI (from 24.3±11.7 to 6.4±7.2/hr, p<0.001).

SDB has been recognised as an important comorbidity in patients with heart failure. Whereas OSA is thought to be a primary condition which, through its detrimental effects on the cardiovascular system during sleep, leads to cardiovascular complications14, it is likely that CSA arises as a consequence of pre-existing HF15. In patients with non-valvular chronic HF, the association with CSA is well known, and interventions to improve HF, such as beta-blocker therapy16 and cardiac resynchronisation therapy17,18, have been shown to reduce the severity of CSA. The current pathophysiological hypothesis is that an increased LVEDP due to HF leads to pulmonary congestion10,19,20 and activates lung vagal irritant receptors10, which stimulate hyperventilation and hypocapnia. The PaCO2 is driven below the threshold for ventilation, which triggers CSA, promoted by enhanced chemosensitivity to CO221 and a prolonged circulation time between the lung and the chemoreceptors22,23. A novel hypothesis suggests that nocturnal fluid shift contributes to the pathogenesis of both OSA and CSA in patients with HF, by means of the displacement of fluid from the legs to the neck and, in CSA, also to the lungs, where it aggravates the pulmonary congestion24. Whether the same mechanisms apply to improvement of CSA after TAVI remains unclear at this point. In the present study, we have demonstrated a correlation of LVEDP with CAI (r=0.74, p=0.024). The levels of NT pro-BNP were significantly higher in patients with CSA as compared with patients without CSA (9,774±9,133 and 3,303±3,965 pg/ml, p=0.03). Both parameters may indicate a higher degree of diastolic heart failure in the patients with CSA that is not reflected by the systolic ejection fraction, which was not significantly different in both groups at baseline (Table 2). However, elevation of sPAP, as estimated by Doppler echocardiography, was not significantly higher in the CSA group.

HAEMODYNAMIC IMPROVEMENT AND REDUCTION OF CSA AFTER TAVI

The TAVI procedure is a recently developed method of aortic valve replacement for use in patients with severe aortic stenosis who cannot undergo surgery or who have a high perioperative risk4,25. It can improve the haemodynamic condition of the patient rapidly26. In the present study, LVEDP decreased immediately from 20.6±9.2 to 13.5±4.0 mmHg after TAVI. After three months, LVEF, sPAP, left atrial volume, and NT pro-BNP had improved considerably, which indicated a general improvement in the haemodynamic situation of the patients (Table 2). The cases of CSA had decreased significantly in number and severity, as indicated by AHI and CAI, in the CSA group after TAVI, whereas the OAI did not improve significantly. However, in this small patient cohort, we were unable to demonstrate a direct correlation between improvement of AHI or CAI and haemodynamic parameters such as LVEF, LVEDP or sPAP.

The study was conducted by means of an ambulatory polygraphy system, whereas the “gold standard” for diagnosing SDB is polysomnography. However, assessment of serial polysomnography traces in this multimorbid patient group of advanced age was not feasible. Thus, there might have been some degree of inaccuracy in distinguishing between OSA and CSA. Second, the limited number of patients did not allow the use of multiple regression analysis to identify independent correlation with haemodynamic parameters. Third, LVEDP after TAVI was measured immediately after the insertion of the prosthetic valve and therefore may not reflect the true LVEDP which the patient exhibits after recovery and during follow-up. Lastly, the sPAP was estimated by Doppler echocardiography. The accuracy of this method has been questioned27.

In summary, we have demonstrated a high prevalence of CSA in patients with severe aortic stenosis and a significant improvement of CSA after TAVI. The findings reveal a feasible clinical model for further investigation of the mechanisms that underlie the association of cardiac disorders and CSA.

We thank Ms. Karin Springmann for her invaluable support in the sleep study laboratory of the University Hospital of Bonn, Germany.