Aims: To describe a new approach to percutaneous mitral valve repair and an illustrative first-in-man experience, we introduce a suture mediated “double orifice”, “edge-to-edge” procedure which can be an effective surgical therapy for mitral regurgitation (MR) in selected patient.

Methods and results: We describe a novel percutaneous approach to double orifice mitral repair utilising an intra-cardiac suture based system. The procedure was performed in 15 patients in four international centres.

Endovascular suture based double orifice mitral repair was feasible with an acute reduction in the severity of MR by ≥ 1 grade in nine of 15 patients. At 30 days improvement in MR appeared durable in six patients. Clinical utility was limited by technical difficulties, the inadequacies of current imaging modalities and suture dehiscence.

Conclusions: Percutaneous endovascular suture based cardiac repair is feasible. However, in utilising the current device clinical benefit was limited and the repair not durable. In the future, similar endovascular approaches may enable more complex cardiac repair.

Various surgical procedures have been developed to address MR. In turn, a number of these have served as models for percutaneous procedures. One such surgical procedure is the “double orifice” repair developed by Alfieri in which the central portions of the anterior and posterior mitral leaflets are sutured together2-7. The result is a mitral valve with two openings, but otherwise normally functioning. Although more “anatomical” techniques are usually favoured, the “double orifice” procedure is relatively simple, reproducible and effective in selected patients3,5,7-12.

The surgical, double orifice procedure has served as a model for the percutaneous edge-to-edge Evalve clip procedure (Evalve Inc., Menlo Park, CA, USA) which has been shown to achieve satisfactory clinical outcomes in selected patients13-17. Whether this procedure is competitive with surgery is currently being examined in a recently completed prospective randomised trial.

Four international sites participated in the evaluation of the procedure. Patients were considered for inclusion if they had structural MR due to central leaflet prolapse involving a single segment, an MR grade ≥3 and New York Heart Association (NYHA) functional status ≥2. Patients were excluded if there was prolapse or flail involving >1 segment, mitral stenosis, annular dilation > mild, ejection fraction ≤35%, annular or leaflet calcification, a history of endocarditis, prior mitral valve repair, creatinine >2.0 mg/dl, stroke or myocardial infarction within the prior six months. Acute success was defined as a reduction of MR grade ≥1. The procedure was approved by the local institutional ethics committees. Informed written consent was obtained from all patients.

The system is comprised of three catheters: a guide catheter, therapy catheter and fastener catheter (Mobius™, Edwards Lifesciences Inc., Irvine, CA, USA). Following femoral venous access and transseptal puncture, the inter-atrial septum is dilated with an 8 mm balloon. A 17 Fr outer diameter guide catheter and its matching dilator are advanced into the left atrium. The dilator is removed. With the temporary assistance of a balloon flotation catheter, an 0.018” wire is placed through the guide catheter and advanced through the mitral valve and into the aorta for stabilisation. The guide catheter incorporates a deflectable distal segment which is placed in the inflow portion of the mitral valve under fluoroscopic and transesophageal echo (TEE) guidance (Figure 1). 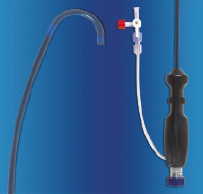 A 10 Fr or 12 Fr therapy catheter is advanced through the guide catheter over the previously placed wire and situated adjacent to the target segment of a mitral leaflet. This catheter incorporates a distal open window containing two needles and needle catchers with attached polypropylene suture (Figure 2 left).

The window segment also contains a suction port which is directed towards the target leaflet. A high power vacuum pump is used to aspirate the leaflets into the suction ports. Capture of the leaflet is confirmed by cessation of blood aspiration and by echocardiographic confirmation. A blood recovery system is utilised to allow multiple suctions attempts. When the target leaflet segment has been captured into the suction port, an actuator trigger advances a needle through the leaflet and into the needle catcher. Suction is discontinued and the window on the therapy catheter is redirected to the opposite leaflet and the process is repeated. The therapy catheter is withdrawn, playing out a single suture loop passing through both mitral valve leaflets. Echocardiography is used to confirm the presence of a double orifice appearance of the mitral valve. If incorrectly positioned, the suture can be withdrawn. If correctly positioned, a separate fastener catheter is then advanced through the guide catheter tracking along the suture. This catheter is used to clip and simultaneously sever the sutures (Figure 2, right). The end result is the approximation of the two suture points and the creation of a double orifice valve (Figure 3).

The procedure was performed in 15 patients. Mean age was 69 years and 86% were male. NYHA functional class was I in 8%, II in 62%, III in 31%. There was a history of prior myocardial infarction in 7%, coronary angioplasty in 7%, bypass surgery in 7%, diabetes in 36%, hyperlipidaemia in 57%, hypertension in 57% and renal insufficiency in 14% and atrial fibrillation in 36%.

A single suture was implanted in four patients, two sutures in eight and three sutures in three patients. Acute success (a reduction of MR grade ≥1) was achieved in nine of 15 patients. Among these nine patients with acute success a total of 12 sutures were placed.

At 30 day follow-up, nine of the 12 successfully placed sutures held. Of these nine patients with acute procedural success a reduction of MR grade >1 was maintained in six with MR grade reduced by 1 grade in three patients, 2 grades in two and 1 grade in one. At 30 day follow-up, complications included pericardial effusion in one patient and clip embolism to an intercostal artery without sequelae in one, both occurring at the time of the initial procedure. There were no myocardial infarcts, strokes or deaths, and no patient had worse MR than at baseline.

A 55 year old man presented with NYHA class II symptoms. TEE demonstrated severe MR with a flail P2 segment and a torn chord. An initial suture resulted in the appearance of a double orifice appearance on echo, but no reduction in MR. A second adjacent suture resulted in a reduction in MR from severe to mild by angiography and TEE. However at three months symptoms had recurred and TEE showed recurrent severe regurgitation with a double orifice appearance of the mitral valve but slight diastolic separation of the leaflets. Elective surgical repair was performed at seven months. The mitral valve was seen to be severely myxomatous (Figure 4). 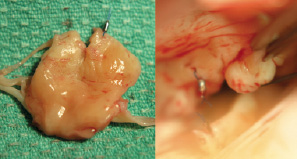 A single clip was found attached to A1 with a small tear on P2 where it appeared the suture had pulled through the leaflet. The suture was cut and the clip easily removed. A second clip was seen on P2 with no apparent anterior leaflet attachment or visible injury. A quadrangular resection of P2 was performed with primary closure and implantation of an annuloplasty ring and an excellent clinical result.

Figure 5. Fluoroscopic image during percutaneous suture edge-to-repair (case 2). LEFT. The guiding catheter has been placed transseptally into the left atrium and is directed towards the mitral valve. An oesophageal echo probe is visible. A therapy catheter has been advanced to the mitral valve. The window of the therapy catheter with the associated suction port and needles is pointed inferiorly. MIDDLE. Two clips have been deployed and a third clip is in the process of being deployed by the fastener catheter. RIGHT. The third suture clip has been deployed and the suture tether severed.

However, at one month a repeat TEE documented the return of severe MR. Three clips were seen associated with the mitral leaflets with a double orifice appearance of the mitral valve similar to that observed after implantation of the initial two clips. Although MR was once again severe, the patient declined surgery and continues on medical management.

Initial animal experience with percutaneous suture repair of the mitral valve has been previously reported18. Subsequently, the procedure was attempted in patients with severe MR with associated mid-leaflet prolapse. It was possible to selectively grasp and manipulate the mitral leaflets utilising a suction-based catheter system, deploy endovascular sutures and accomplish a functional mitral valve repair. The procedure appeared relatively safe when performed by operators experienced in transseptal catheterisation. However several limitations were encountered as outlined below. These limitations, and the questionable economic success of the project, subsequently led to discontinued development of this device by the sponsor. Nevertheless the experience may be of value to future investigators.

Procedural difficulty was a major concern. This was largely due to the limitations of the prototype device and inexperience of the operators with the technique; but also largely due to the limitations of the available imaging modalities. Fluoroscopic imaging was adequate for initial positioning of the therapy catheter and orientation of its suction/needle capture window as well as deployment of the suture fastener. Assessment of the leaflets during device deployment was dependent on TEE imaging. Although two-dimensional TEE was sufficient to guide the procedure in a general way, it was severely limited in guiding and assessing mitral leaflet capture particularly. Although not available during the study period, 3D TEE may have proven useful. Although successful capture of both leaflets by an initial suture could be appreciated by the appearance of a double orifice, subsequent placement of additional sutures were increasingly difficult to evaluate.

Surgical edge-to-edge repair generally involves a mattress suture or running suture along a short length of the leaflets. The percutaneous suture repair procedure failed to reproduce the results of surgical suture repair. Sutures were not accurately placed, not necessarily adjacent to one another, typically did not penetrate the full thickness of the leaflets, and were sometimes placed asymmetrically in the two mitral leaflets, potentially worsening mitral coaptation and limiting durability. Even when symmetrically placed, a single percutaneous suture generally did not result in adequate coaptation. It was apparent that multiple sutures were likely required to cover the whole area of malcoaptation. However, placement of multiple sutures increased the technical complexity and echo guidance was even more problematic. Moreover, even successful placement of two or three sutures was associated with dehiscence at follow-up. In addition, the definition of success was a minimalistic one; reduction in MR grade ≥1. Although this may be valid in terms of device development, this does not meet the standards of determining successful surgical repair.

Limited durability was related to multiple factors including: the small tissue bites obtained with the design constraints of the therapy catheter; asymmetric suture placement and the design of the guiding catheter which was limited in its degrees of freedom with only one-plane steerability. The lack of a reinforcing annuloplasty ring may have contributed to suture dehiscence, as this is considered to be a factor involved in durability of surgical valve repair.

A suture-based system was thought to have advantages over the alternative Evalve clip-based system. Sutures are less bulky, and offer the potential for accurate placement of multiple sutures and more complex repair procedures. However, a large clip is relatively easily visualised on echocardiography and fluoroscopy. The opposing arms of a clip facilitate symmetrical grasping of opposing leaflet segments. In addition, a clip may be applied, evaluated, released and reapplied with a relatively low risk of damaging the valve14,16.

In summary, percutaneous endovascular suture based cardiac repair is feasible. Clinical application in the setting of mitral edge-to-edge repair was limited – largely by technical difficulties, inadequacies of current imaging modalities and suture dehiscence – and consequently this particular device is no longer being pursued. Still, it remains possible that similar approaches may enable more sophisticated endovascular repair procedures in future.