Aims: The Absorb everolimus-eluting bioresorbable vascular scaffold (BVS) represents an important advance in percutaneous coronary intervention (PCI) technology. With increasing use of BVS, it is important to understand its expansion characteristics to ensure optimal scaffold deployment. Optical coherence tomography (OCT) has been shown to improve detection of intraprocedural complications compared with conventional intravascular imaging modalities. This study aimed to determine whether or not OCT, post successful angiographic BVS implantation, influenced decision making with regard to the need for further scaffold optimisation.

Methods and results: Consecutive patients undergoing OCT-guided BVS implantation from August 2012 to March 2013 were reviewed to determine if further intervention was required to optimise BVS implantation, based on OCT performed after what was deemed to be an optimal angiographic result. Nineteen patients with 29 scaffolds were analysed. Mean age was 53.7, with 84% male. There was a range of lesion types with 12 (63%) type A and seven (37%) type B or C. Of 29 scaffolds analysed, 28% required further intervention after OCT review, three (37.5%) due to scaffold malapposition and five (62.5%) due to scaffold underexpansion.

Conclusions: Despite achieving angiographic success in all BVS implantations, further optimisation was required in over a quarter of patients on the basis of OCT findings.

Underexpansion and strut malapposition of a coronary stent during percutaneous coronary intervention (PCI) is associated with a higher incidence of restenosis and stent thrombosis1. Intravascular ultrasound (IVUS) as an adjunct to angiography has previously been demonstrated to reduce rates of target vessel revascularisation2-4, although some studies have found conflicting results4. Optical coherence tomography (OCT) is a light-based high-resolution intracoronary imaging modality5, which allows for more accurate detection and quantification of scaffold malapposition, underexpansion, tissue prolapse, and stent edge dissection, as compared with conventional intravascular imaging modalities6,7. OCT provides higher resolution, in the range of 10-15 μm, despite limited depth of penetration8,9, thus giving it a distinct advantage over IVUS. A recent study has shown that OCT guidance for PCI decision making is able to identify adverse features requiring immediate intervention in a large proportion of patients, resulting in improved clinical outcomes9.

The BVS has a number of proposed advantages over current metallic stent technology. These include elimination of chronic sources of vessel irritation and inflammation, which can reduce the potential risk of late scaffold thrombosis after complete scaffold bioresorption10. BVS is also thought to restore natural physiologic vasomotor function in patients, theoretically reducing the need for prolonged dual antiplatelet therapy, as well as allowing further surgical and percutaneous revascularisation, without precluding non-invasive imaging of a target vessel following intervention11,12.

Initial animal model13 and clinical trials14,15 demonstrated BVS to be a safe and efficacious alternative to metallic stents. The first-generation BVS was found to have greater acute and late stent recoil16,17 which may be attributable to the greater flexibility of polymer as compared to metal. These findings resulted in design modification for the new-generation BVS, most notably enhanced mechanical strength18,19.

Given the intrinsic differences in recoil characteristics between BVS and metallic stents, along with the larger strut dimension of BVS16, there is the potential for greater scaffold underexpansion and malapposition. This may not be so much of an issue in larger vessels (>3 mm) but was thought to be of potential concern in small calibre vessels, where shear stress is higher. However, two studies have recently suggested this may not be the case20,21.

Consequently, the aim of this study was to determine if OCT, post successful angiographic BVS implantation, influenced decision making with regard to the need for further scaffold optimisation.

Consecutive patients undergoing OCT-guided BVS implantation from August 2012 to March 2013 at the Royal North Shore Cardiac Centre were reviewed. All BVS case data were entered prospectively into a local bespoke database, based on a predetermined data set. This included information on patient demographics, risk factors, and outcome measures. All information was entered by the operator at the time of the index procedure and cross-checked and updated by an independent audit officer at the end of the hospital admission. Data consistency was assured by an internal audit undertaken by independent data officers within the hospitals.

Each BVS case was reviewed to determine if further intervention was required to optimise the scaffold based on the findings of the OCT after what was deemed to be an angiographically successful BVS deployment. If scaffold underexpansion or malapposition was identified, further post-dilatation was undertaken using non-compliant balloons.

Patients were pretreated with clopidogrel 600 mg and aspirin 300 mg as required. All procedures were performed via the radial approach using standard techniques.

Initial predilatation was performed to allow OCT imaging of the lesions, to determine proximal and distal reference diameters, position of significant side branches, and lesion characteristics. Further predilatation was undertaken to within 0.5 mm of the reference vessel diameter. Scaffold post-dilatation using non-compliant balloons was undertaken until angiographic success was achieved (see Definitions).

A further OCT was then undertaken to assess adequate scaffold expansion and apposition, as well as tissue prolapse, and the presence or absence of scaffold outflow dissection. On the basis of the findings from this OCT run, decisions were made as to whether or not any further scaffold optimisation was required.

During the case, intravenous heparin 100 IU/kg was given to maintain the activated clotting time >250 s. Glycoprotein IIb/IIIa inhibitors were used according to operator discretion.

Strut malapposition (SM) was defined as incomplete scaffold apposition (ISA) area delineated by the abluminal side of the frame border of the malapposed strut (covered or uncovered) and the endoluminal contour of the vessel wall23.

Tissue prolapse was defined as any tissue protruding between struts into the lumen at baseline, and the prolapse area estimated between the prolapsed contour (lumen contour) and the scaffold area23.

Finally, any other intraluminal defect free from the vessel wall (e.g., thrombus) was also quantified as an area23. 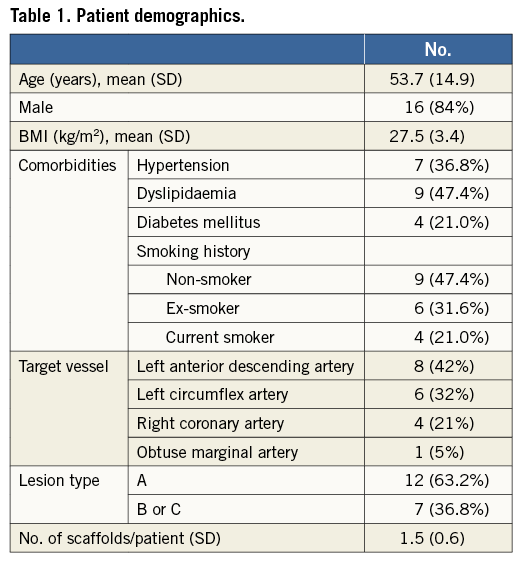 The target vessels were eight (42%) left anterior descending artery, six (32%) left circumflex artery, four (21%) right coronary artery, and one (5%) obtuse marginal branch. A range of lesion morphologies was included in the study, with 12 type A lesions (63.2%) and seven (36.8%) type B or C lesions.

Of the 29 scaffolds analysed, eight (28%) required further intervention following OCT review, despite having achieved angiographic success. Of these eight scaffolds, the reason for further BVS optimisation was scaffold malapposition in three (37.5%) and scaffold underexpansion in five (62.5%).

As compared to scaffolds not requiring further optimisation following OCT, there was a significant increase in the total number of balloon angioplasty inflations (16.5 vs. 8.7, p<0.01) and total length of procedure (113.8 min vs. 83.7 min, p<0.05), but not fluoroscopy time (25.9 min vs. 18.9 min, p=0.15). There was no association between age, gender, target vessel or lesion type and requirement of OCT-guided optimisation of scaffold placement (Table 2). 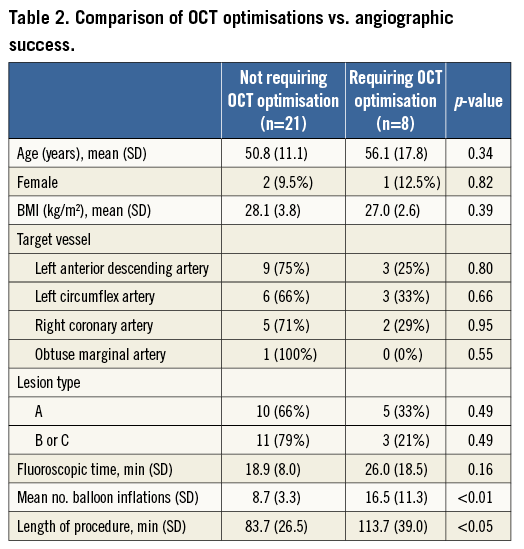 There were no adverse events associated with OCT imaging in this cohort, despite a total of 54 OCT runs being performed. Within this cohort there were no outflow scaffold dissections, significant tissue prolapses or acute scaffold thromboses.

BVS herald an important development in PCI technology, in view of the potential advantages they offer over metallic stents. Given the inherent biomechanical differences in scaffold structure between BVS and metallic scaffolds, it is imperative to ensure that at implantation the scaffold is optimally deployed, to maximise chances of successful outcomes in both the short and the long term.

OCT guidance for PCI utilising metallic stents has previously been shown to be safe and feasible26, resulting in superior clinical outcomes when compared to traditional angiographic results alone9. This study is novel in so far as it has determined the rates of OCT-defined underexpansion and malapposition associated with BVS implantation, despite visually determined angiographic success being achieved in all patients.

The rate of 28% of patients with optimal angiographic results requiring further intervention to optimise BVS scaffold placement following intravascular imaging is similar to the ABSORB trial27, where 24% of patients in cohort A and 27% of patients in cohort B had confirmed malapposition15. Recently, an ABSORB cohort B substudy compared angiographic maximal luminal diameter and appropriate deployment of the everolimus-eluting bioresorbable vascular scaffold in 52 lesions using OCT. In this study, 39 lesions (75%) had at least one strut malapposed, and the mean percentage ISA was 6.2%. This study suggested a mean percentage ISA of 5% as a criterion for non-optimal BVS deployment28.

It is increasingly being suggested that, while they are largely not identified on angiography, these procedural issues may indeed be clinically relevant and associated with post-procedural morbidity and mortality9.

As OCT identified suboptimal scaffold deployment in just over 25% of patients with predominantly type A lesions, when BVS use is expanded to include more complex lesion cohorts, this number may theoretically increase further.

The modified American College of Cardiology/American Heart Association (ACC/AHA) lesion morphology classification scheme has prognostic impact for early and late outcomes with both bare metal scaffolds29 and drug-eluting scaffolds30. While BVS use has been validated in all lesion classifications15 the long-term prognostic outcomes remain to be elucidated.

In the present study there was no relationship between lesion complexity and need for further optimisation, although the numbers were small. It is, however, conceivable that complex lesions (type B2 and C) treated with BVS could warrant further optimisation based on OCT findings. Indeed, when using conventional metal stent technology, use of intracoronary imaging with IVUS or OCT is considered good practice when undertaking left main stem (LMS) intervention. A subgroup analysis from the MAIN-COMPARE registry reported that IVUS guidance was associated with improved three-year mortality compared with a conventional angiography-guided procedure after adjustment with propensity-score matching (6.3% IVUS vs. 13.6% angiography, log-rank p=0.063, hazard ratio [HR]: 0.54; 95% CI: 0.28-1.03)31. OCT has recently been reported assessing the vascular response to LMS stenting with metal stents, but not yet with BVS32.

OCT is uniquely positioned as a safe and effective modality to optimise outcomes following BVS implantation. Firstly, it allows accurate determination of vessel sizing as well as lesion characteristics. This is a key step prior to BVS implantation, as aggressive post-dilatation greater than 0.5 mm above the reference vessel diameter increases the risk of scaffold fracture. Hence, lesion preparation is crucial. Secondly, after deployment, it can identify underexpansion, malapposition and scaffold outflow dissections, which may influence short-term BVS outcomes. Finally, in the longer term it is a key technique allowing accurate detailing of scaffold absorption. Whether or not OCT should be recommended as mandatory in the early experience of centres starting BVS should be considered.

This is a preliminary single-centre observational study with which come inherent limitations: in particular, the sample size was very small. Many of the OCT consensus definitions were originally derived for metal stent technology, and therefore the ones used, although derived from previous BVS studies, have not been subject to standardisation. Further larger randomised control trials in the future will be of benefit to define the role of OCT-guided BVS implantation.

Despite thorough lesion preparation, post-dilatation and angiographic success in all cases of BVS implantation, further scaffold optimisation was required in over a quarter of cases on the basis of OCT findings. The clinical implications of these findings remain to be discerned.