Aims: A new GORE® septal occluder (GSO) was granted CE mark in Europe in June 2011 for the treatment of patent foramen ovale and atrial septal defect. Major changes have been made to the device and delivery system compared to the HELEX® device. The new delivery system has simplified the implantation procedure and the retrievability of the device after deployment if needed. The design of the GSO has improved the device apposition ability and tissue response whilst keeping its atraumatic design, low septal profile with minimal septal distortion and long-term biocompatibility. The first three clinical cases of GSO use in the world are briefly described and the immediate and short-term outcome of the first eleven patients who underwent PFO or ASD closure using GSO in our centre are reported.

Methods and results: The mean age of the eleven patients was 53±9 years and six of them were women. Ten of these patients had patent foramen ovale and one had secundum atrial septal defect. In all the cases, the GSO devices were successfully deployed in the first attempt without any complication. Only one patient had a minor residual shunt detected immediately after the device deployment. All the patients were re-assessed 70±33 days later and no residual shunt was detected in any of them. One of the patients had an episode of paroxysmal atrial fibrillation. There was no device fracture found in the six patients who also had a fluoroscopic examination during follow-up.

Conclusions: Our initial experience with GSO shows promise in handling and occlusion rate. Larger-scale and longer-term outcome on the performance of GSO is required to ensure safety and efficacy.

The GORE® septal occluder (GSO; W. L. Gore & Associates, Inc., Flagstaff, AZ, USA) is designed for patent foramen ovale (PFO) and atrial septal defect (ASD) closure regardless of the direction of shunt. The ratio of the diameter of the device to the diameter of the septal defect should be at least 1.8 (Figure 1A - Figure 1F). The range of device diameters is between 15 and 30 mm. We describe the use of the device in three patients: this represents the first clinical use of this new device in the world. We also describe our early clinical experience in the use of such a device and discuss its design and potential advantages. 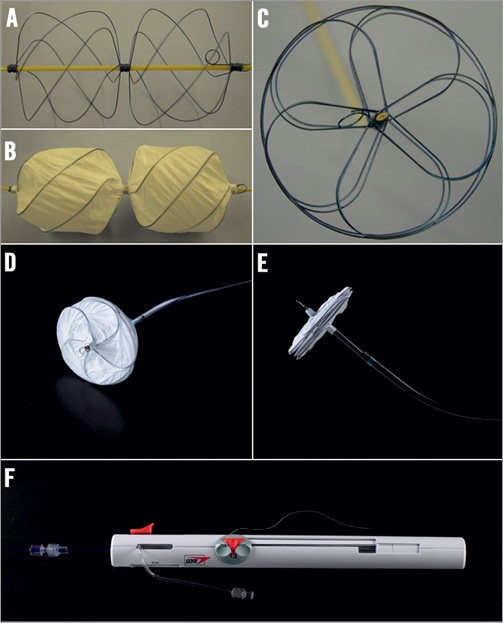 Figure 1. The GSO is made of five nitinol wires encased in a layer of ePTFE (A-C) and allows better apposition of both discs whilst maintaining the atraumatic characteristic and a low device profile (D and E). The control handle of the delivery system has simplified the deployment and retrieval procedures ensuring consistency (F).

A previously well 50-year-old man, who frequently travelled by air, suffered from a left hemiplegic embolic stroke five days following a right leg deep vein thrombosis despite treatment with enoxaparin and warfarin. Computed tomography imaging confirmed right cerebral infarction with extensive thrombus extending from the right side of the aortic arch into the brachiocephalic trunk and occluding the right internal carotid and middle cerebral arteries. He was thrombolysed using recombinant tissue plasminogen activator with minor symptom resolution and needed decompression craniotomy a day later due to increased intracranial pressure. He did not have any thrombophilic abnormality and a transthoracic echocardiogram (TTE) confirmed the presence of a PFO. Twelve days later, the PFO was successfully closed percutaneously with a 30 mm GSO under local anaesthesia with fluoroscopy and intracardiac echocardiographic (ICE) guidance (Figure 2A - Figure 2I). No residual shunt was detected immediately post procedure. Due to his clinical state, a repeat TTE two weeks later was performed using colour flow mapping and external abdominal pressure to mimic the effect of Valsalva manoeuvre. This confirmed stable device position without residual shunt (Figure 2D). 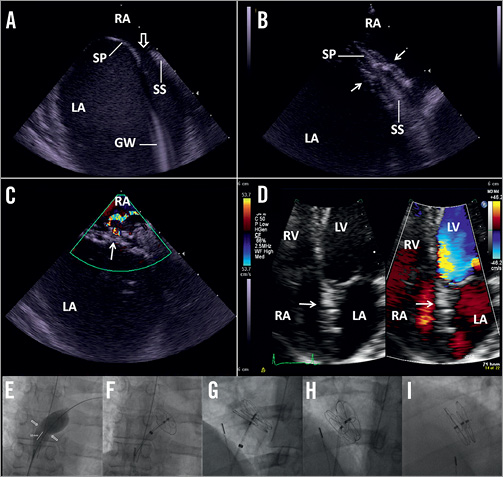 A 44-year-old previously fit non-smoking man had two episodes of transient ischaemic attacks over a period of one month with left-sided weakness that fully resolved within five to seven hours. Following extensive investigation, a PFO was identified. This was successfully closed percutaneously with a 20 mm GSO under local anaesthesia with fluoroscopy and ICE guidance (Figure 3A - Figure 3C). No residual shunt was seen immediately and one day after the procedure (Figure 3D). A repeat transoesophageal echocardiogram (TEE) two months later confirmed the absence of residual shunt or device-related thrombosis. 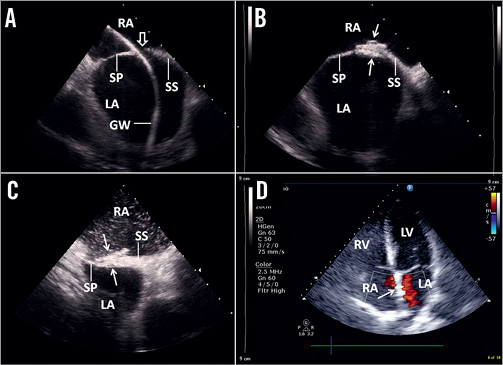 A four-year-old boy who had total cavopulmonary connection (TCPC) with a 4 mm window-type fenestration for mitral atresia and transposition of great arteries presented with hypoxia (arterial oxygen saturation of 88% at rest on room air). He had a permanent epicardial pacemaker for acquired conduction abnormality following his surgeries. His fenestration was successfully closed with a 20 mm GSO under general anaesthesia with TEE and fluoroscopic guidance (Figure 4A - Figure 4G). A minimal residual shunt was present immediately after the closure (Figure 4B) with an improvement of oxygen saturation to 94% on room air. However, there was no residual shunt on TTE the next day (Figure 4C and Figure 4D) with sustained improvement in the oxygen saturation. Similar findings were observed a month later without evidence of device-related thrombosis on TTE. 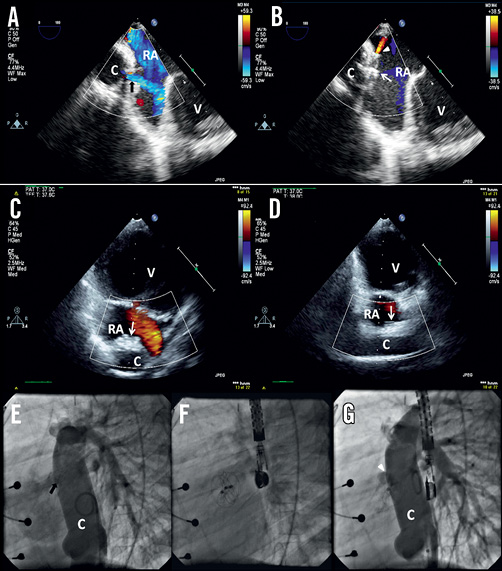 Figure 4. A) Colour flow mapping on TEE demonstrated flow across a 4 mm fenestration (black closed arrow) on the TCPC conduit (C) and (B) this was successfully closed with a 20 mm GSO (white arrow) with minimal residual shunt (white arrowhead). The same was observed on (E-G) fluoroscopy. The residual shunt was not detected by CFM on TTE the following day on both (C) cross-sectional and (D) longitudinal views of the conduit. RA: right atrium; V: common ventricle

CASE SERIES OF PATIENTS WHO HAD PFO AND ASD CLOSURE

To date, 11 patients have completed their short-term follow-up at 70±33 (range 14-120) days following their procedure (Table 1). Six of them were women with a mean age of 53±9 (range 40-67) years. Ten patients had paradoxical cerebral or peripheral arterial embolism attributed to PFO and one patient had ASD. All the procedures were performed under local anaesthesia using intracardiac echocardiographic and fluoroscopic guidance. All the devices were successfully deployed upon the first attempt without the need for retrieval. There was no device embolisation or vascular complications. Only one patient had minor residual shunt on agitated saline contrast and Valsalva manoeuvre immediately after the procedure.

During follow-up, one patient developed paroxysmal atrial fibrillation. Two patients reported transient or intermittent palpitation without any arrhythmia being documented. In all the patients, there was no evidence of device-related thrombosis and no residual shunt was noted on TTE or TEE with agitated saline contrast and Valsalva manoeuvre (Figure 5A). There was also no evidence of wire fracture in the six patients who had a follow-up fluoroscopic examination (Figure 5C).

The GSO is made of five nitinol (nickel-titanium) wires encased in a layer of microporous expanded polytetrafluoroethylene (ePTFE) (Figure 1A-Figure 1C). When deployed, it forms two circular opposing discs that are secured in place by a locking mechanism which passes through the centre of the device (Figure 1C-Figure 1E, Moving image 1). Compared to the single-wire HELEX® device (HD)1, these nitinol wires of GSO form not only an outer circular frame but also five smaller inner petal-shaped supporting rings on each disc (Figure 1C-Figure 1E). Such a design provides better closure to the slit-like structure of PFO and improves the apposition ability of the discs. This may explain the low rate of residual shunt seen in our patients. For PFO closure using HD in the setting of paradoxical embolism, the prevalence of residual shunt is between 33% and 43% within six months2,3 and approximately 12% at one year4,5. Hence, the GSO may potentially reduce the rate of residual shunt.

The GSO has retained the atraumatic feature of HD, which has not had any reported case of atrial septal or free wall erosion in over a decade of clinical experience. The GSO also has a low profile, conforms well to the atrial anatomy and causes minimal distortion to the atrial septum (Figure 1D and Figure 1E; Figure 5A and Figure 5B). However, one of our patients developed an episode of paroxysmal atrial fibrillation within two weeks following PFO closure and was started on a beta-blocker. This resolved within four days and no further symptoms were reported when reviewed three months later. Although atrial arrhythmia is known to be associated with device closure of interatrial septal defect, larger and longer-term studies are needed to determine the incidence of atrial arrhythmia associated with the GSO. 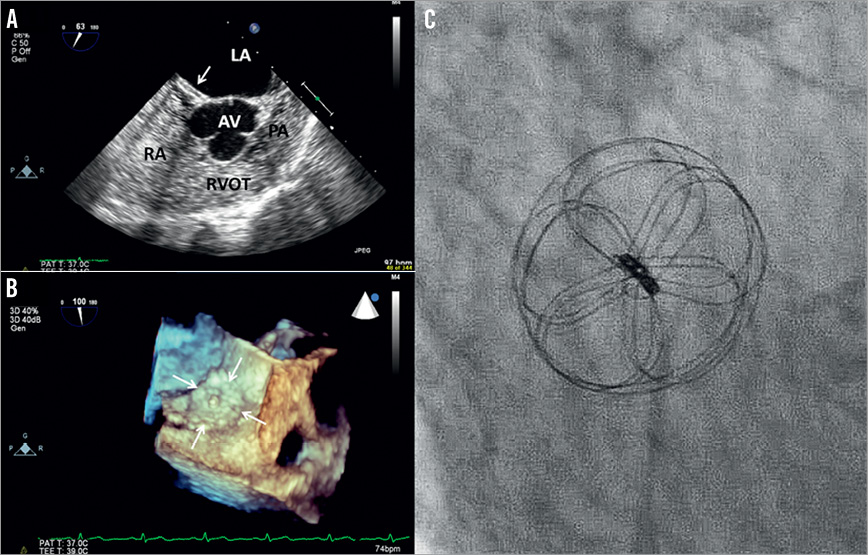 The incidence of wire fracture in HD has been reported to be approximately 8%. However, only one case has been reported to be associated with major adverse outcome causing mitral valve perforation requiring surgical intervention6,7. In addition, there has been a case of wire fracture involving the device locking mechanism requiring percutaneous removal7. The majority of fractures in the HD were associated with larger diameter devices, namely the 30 mm and 35 mm1. To reduce the risk of wire fracture, the GSO has a graded increase in its wire thickness from 0.08 to 0.11 inches with the increase in the diameter of the device from 15 mm to 30 mm. In addition, all the wire segments in the GSO are encased within the ePTFE layer and therefore any wire fracture is less likely to cause adverse injury or embolism (Figure 1B). We did not identify any incidence of short-term wire fracture in our patients (Figure 5C).

The ePTFE is a benign material that encourages rapid biological response. The GSO device is covered by only a single layer of ePTFE with a higher degree of interstices to encourage more rapid tissue growth compared to the HD. In a canine model, the GSO is completely covered by a thin layer of connective tissue that deeply infiltrates its interstices by one month. Based on the experience from HD, there is no local tissue nickel contamination or toxicity and it can be safely used in patients with nickel allergy8.

The GSO device is preloaded onto a 10 Fr delivery catheter without the need for a large-diameter long catheter, making it simple to operate, reducing the risk of air embolism or thromboembolism, and it allows smaller-built patients or younger children to be treated (Figure 1D and Figure 1E). The delivery catheter is introduced into the left atrium over a guidewire via an 11 Fr venous sheath. The new delivery system has simplified the device deployment process, ensuring consistency in the deployment process, thus reducing the effect of inter- and intra-operator variability in their skills and techniques (Figure 1F, Moving image 1). The GSO device is retrievable at any stage of the deployment and the new delivery system has also simplified the retrieval process. The retention suture remains a safety feature of this new system and it allows the final result to be assessed without any tension on the atrial septum or device. It also allows the device to be retrieved even after it has been deployed.

Our case series represent early clinical experience and we feel that the system is easy to use, safe and has satisfactory outcome in all the cases. Larger-scale and long-term outcome on the performance of the GSO system is required in order to ensure safety and efficacy.

This paper documents the first-in-man use of the Gore septal occluder and shows promise in handling, occlusion rate and biocompatibility. These early data will require substantiation with anticipated increase of use of the device in Europe and the rest of the world.

We also thank Peter Zeller and Scot K. Mathena from W. L. Gore & Associates, Inc., Flagstaff, AZ, USA, for providing us with the images for the GSO device.

Moving image 1. Step-by-step guide to the use of GSO device under fluoroscopy and ICE guidance.