Randomized comparison of deliverability and in-hospital complications in implantation of BxSonic®, Express® and Flexmaster® coronary stents

Aims: To compare deliverability and in-hospital complications in implantation of BxSonic®, Express®, and Flexmaster® coronary stents in a randomized multicenter trial in five Danish interventional centres.

Methods and results: Patients with planned stenting of at least one stenotic lesion in a native coronary artery were included in the study. There were 494 (664) patients (treated lesions) in the BxSonic®, 499 (657) in the Express® and 500 (658) in the Flexmaster® groups. The groups were well matched with regard to age, sex, diabetes, smoking, hypercholesterolemia, hypertension, indication for PCI and coronary artery lesion complexity. The study stents were implanted with or without predilatation according to ordinary clinical practice.Rates of successful stent implantation and in-hospital stent thrombosis, re-intervention, non-fatal myocardial infarction or death. The BxSonic®, Express® and Flexmaster® stents were successfully implanted in 92,2%, 89,3% and 91,6% of all lesions (ns). There were no in-hospital deaths and the rates of in-hospital complications were similar in the three stent groups.

Conclusion: We found similar deliverability and in-hospital complication rates of the BxSonic®, Express® and Flexmaster® stents.

Implantation of coronary stents has reduced the risk of acute vessel closure and the long term risk of restenosis following balloon angioplasty1-3. Coronary stents are now used in the majority of percutaneous interventions. Although a multitude of companies are competing for the market by optimizing stent deliverability and long-term performance, there are relatively few head to head comparisons of coronary stents4-7. In the present study, we compared deliverability of and in-hospital complication rates following implantation of BxSonic®, Express® or Flexmaster® stents. These stents are commonly used bare metal stents, and the BxSonic® and the Express® stents are the platform of the two first drug eluting stents on the market, the Cypher® and the Taxus® stents.

The study was conducted as a multicenter randomized study with participation of all five Danish interventional centres. The patient inclusion took place between December 2001 and August 2004. The study was designed to compare major cardiac event rates 12 months after implantation of Express®, BxSonic® or Flexmaster® stents. In the present paper, we compared the secondary endpoint of deliverability of and in-hospital complication rates following implantation of the above mentioned stents.

Patients with planned complete revascularization by stent implantation in at least one stenotic lesion in a native coronary artery were included in the study. Reasons for exclusion were myocardial infarction within 48 hours, expected life expectancy less than one year, in-stent restenosis, s-creatinin >200 Umol/l, intolerance to acetyl salicylic acid or clopidogrel or a planned staged procedure. Clinical data is given in table 1 and lesion characteristics in table 2. 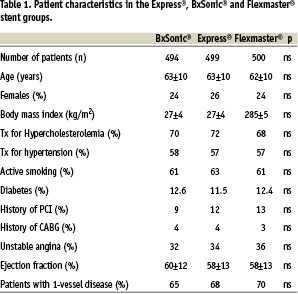 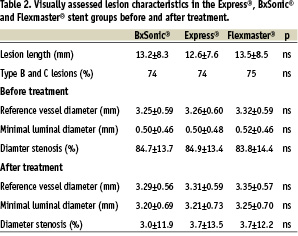 The Express®, BxSonic® and Flexmaster® coronary stents are 516L stainless steel stents with a strut thickness of 132 µm, 140 µm and 90 µm, respectively. There are minor differences in design and all stents are claimed to be rather flexible.

Q-wave myocardial infarction: clinical and enzymatic evidence (a threefold increase of Troponin-T or CKMB) of AMI and new Q-waves in >2 ECG leads.

Non-Q-wave myocardial infarction: clinical and enzymatic evidence (a threefold increase of Troponin-T or CKMB) of AMI without Q-wave development.

Stent thrombosis: thrombotic occlusion of one of more study stents.

Emergency PCI: PCI during admission because of index PCI failure.

Emergency CABG: CABG during admission because of index PCI failure.

Before the PCI procedure the patients were premedicated with Aspirin 150 mg daily. During the procedure a weight adjusted bolus of heparin (5.000-10.000 U) was given without routine control of the activated clotting time. A 300 mg bolus of clopidogrel was given immediately after the procedure and continued with 75 mg daily for one month in patients with stable angina and for 3 months in patients with unstable angina. Glycoprotein IIb/IIIa (GP IIb/IIIa) inhibitors were administered at the discretion of the operator. Heparin dose in patients treated with GP IIb/IIIa inhibitor was 75 IU/kg. The femoral approach and 6F guiding catheters were routinely used. We aimed at stenting all lesions with a significant (visually assessed) stenosis. POBA was only done, when the study stent or other stents could not be inserted. In multiple stenting the same type of stents was used. Troponin-T and CKMB were not measured routinely, but at the discretion of the operator. Discharge was planned on the day after the PCI procedure.

Randomization was performed, stratified by sex and history of diabetes, by a computer accessible round the clock through a telephone-line. Only site-specific pass-codes permitted access. The system complied with international criteria for proper concealment of randomization.

Continuous variables were expressed as mean value + SD and discrete variables as absolute values and percentages. Clinical and angiographic variables in the two groups were compared using the Kruskal-Wallis and the chi-square tests. With alfa=5% and 1-beta (power)=80% and a mean MACE rate after one year of 25%, the study was planned to be able to show a difference of ±10% between the three stents, corresponding to one year MACE rates of 20%, 25% and 30%, respectively. The necessary number of patients in each group for this scenario was 360. Because of elements of uncertainty in estimation of the MACE rate, it was decided to include 500 patients in each group, resulting in a somewhat over-powered study.

The three groups of patients were well matched concerning clinical data (table 1) and lesion characteristics (table 2). A total of 657, 664 and 658 lesions were treated in the Express®, BxSonic® and Flexmaster® stent groups, respectively. The stent implantation success rates did not show statistically significant differences in the three stent groups. Also, the rate of in-hospital complications was low and similar in the three stent groups. No patients died during the admission (table 3). 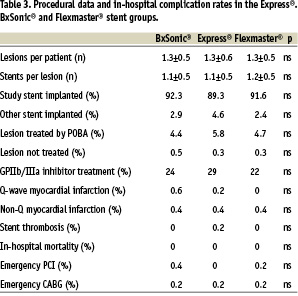 The present study compared immediate results of implantation of three commonly used bare metal coronary stents, the Express®, BxSonic® and Flexmaster® stents. The rate of in hospital complications were low and at the same level in the three stents. There were only insignificant differences in deliverability of the stents.

Despite the extensive use of coronary stents and a multitude of different stent products on the market, there are relatively few head to head stent comparisons, and most of these comparative studies included selected patients. In the early nineties the Palmaz-Schatz stent dominated the market, and a number of trials showed equivalence to second generation stents such as the NIR® and the Multilink® stents6-8. Later, equivalence was found between the NIR® and the S670® stents9. Some stents turned out to be associated with increased rates of restenosis, such as the coil design GRII® stent, the Paragon® tantalum stent and gold coated stents5,10,11.

Stent design did not influence restenosis rates, and until restenosis rates were found to be related to strut thickness, tubular laser cut stainless steel stents were considered equally good, “a stent is a stent”12,13.

In conclusion, in the present study we found similar deliverability and in-hospital complication rates of the Express®, BxSonic® and Flexmaster® stents. Comparative studies of new generations of drug eluting stents may be recommended.