Quantification of scientific output in cardiovascular medicine: a perspective based on global data

Aims: We sought to explore whether global and regional scientific output in cardiovascular medicine is associated with economic variables and follows the same trend as medicine and as science overall.

Methods and results: We registered the number of documents, number of citations, citations per document and the h-index for the first 50 countries according to the h-index (a measure to evaluate both the productivity and impact of the publications) in cardiovascular medicine. Economic variables (gross domestic product [GDP] per capita, % expenditure of the GDP in research and development [R&D] and health) were obtained from the World Bank, the UNESCO, and the World Health Organization. In total, the scientific output in cardiology showed the same position as in medicine and science overall (mean difference vs. medicine –0.9±5.3º, p=0.25 vs. science –0.7±5.3º, p=0.39). We found significant correlations between the h-index and the % GDP expenditure in R&D (r=0.67, p<0.001), and the % GDP expenditure in health (r=0.71, p<0.0001). Overall, there was a 21.4% (interquartile range 3.7; 55.0) increase in the % GDP expenditure in R&D between 1996 and 2007. Emerging economies showed the larger growth in % GDP expenditure in health and R&D.

Conclusions: The global situation of scientific output in cardiovascular medicine is highly polarised and closely related to economic indicators. Emergent economies, with higher rates of GDP growth and increasingly larger expenditures for R&D and healthcare, are expected to show a visible escalation in the scientific global picture in the near future.

The United States of America (USA) produces 20% of the world research. Nevertheless, in the past five years the USA has witnessed an approximate 5% loss of the global share of publications. The traditional leaders in research account for 59% of all spending on science globally. However, similar to the USA, they have all lost a significant share of the global authorship during the past decade1-3.

The field of cardiovascular medicine has not been an exception in terms of impressive growth during the past decade. The answer to the question as to whether global and regional scientific output in cardiovascular medicine is associated with economic variables and follows the same trend as medicine and as science overall remains unknown.

The Scimago Journal and Country rank (http://www.scimagojr.com) public access database, which includes journals and country indicators powered by Elsevier’s B.V. Scopus database, was searched for data between 1996 and 2010. We registered the number of documents, number of citations, citations per document (for citable items including original articles, reviews, and conference papers) and the h-index for the 50 countries with the highest h-index in cardiovascular medicine (hcardiology), according to the Scopus® Classification. The citations per document were defined as the average citations (of all times) per document of documents published during the period 1996-2010. The Hirsch index (h-index) is a measure to evaluate both the productivity and the impact of the publications of an individual, university, department, or country, and takes into account the scientist’s most frequently cited papers and the number of citations that such manuscripts have received4,5. A given scientist has an h-index of h, if he/she has published h papers, each of which has received h citations. We calculated the h-index for cardiovascular medicine (hcardiology), medicine overall (hmedicine), and science overall (h science) using the SciVerse’s Scopus database. Manuscripts with multiple authors from different countries were adjudicated as one document per country involved, regarding the nationality, but as a single item regarding the total manuscript count. 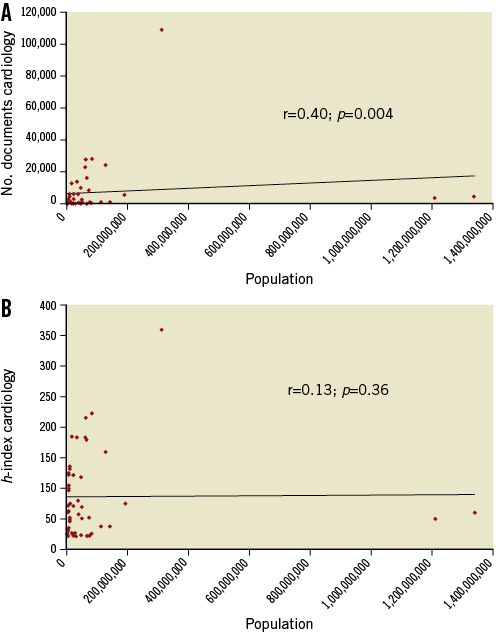 SCIENTIFIC PRODUCTIVITY IN CARDIOLOGY VS. MEDICINE AND SCIENCE OVERALL

Aside from rare exceptions, the scientific output in cardiology showed almost the exact same position as in medicine and science overall (mean difference vs. medicine –0.95±5.1, p=0.20 vs. science –0.60±5.3, p=0.43). The Bland-Altman plot (Figure 2) portrays the close agreement between the rankings in cardiology and science.

Figure 2. Bland-Altman plot depicting the agreement between rankings in cardiovascular medicine and in science overall.

RELATIONSHIP BETWEEN THE SCIENTIFIC OUTPUT AND ECONOMIC VARIABLES

The h-index has rapidly gained relevance in recent years as a measure to evaluate the scientific output of an individual, university, society, or country. Indeed, European university hospitals often use the h-index as a tool to assess the scientific merits of individuals to obtain academic positions or to qualify as professors. Aside from its recognised limitations, the h-index is probably the most simple and yet precise means to assess the scientific productivity of individuals5. The weakness of the simple computation of the number of published documents is portrayed by the significant correlation we have found between this variable and the population, whereas no relationship was observed between the latter and the h-index.

Additional observations can be made from our results. Firstly, we found that the leading role of the USA in the global economy and in research is reproduced in the cardiovascular field, producing 30% of global share. Likewise, the polarisation of scientific productivity is further demonstrated by the fact that the G8 nations produced 68% of the global share.

It is noteworthy that the scientific output in cardiology followed an almost linear relationship to the output in medicine and in science as a whole. Such an analogous situation in different fields could be due to political, educational and cultural decisions of governments that might have a larger weight than individual efforts in specific fields.

Since the GDP as well as the percentage GDP expenditure on health and R&D are highly related to scientific productivity, it can be expected that emerging countries with higher growth rates of such economic variables will experience a significant growth in their scientific productivity in cardiology. However, it is hard to establish what should be the time requested for a sustained economic growth to generate visible improvements in scientific output.

The analysis presented was based mainly on the h-index. Therefore, limitations of this index also apply to the limitations of our manuscript6. Secondly, we did not calculate the number of self-citations, which might increase the author’s own h-index. Finally, due to the lack of completeness of current worldwide economic databases, the most updated economic variables analysed were those of 2007.

The global situation of scientific output in cardiovascular medicine is highly polarised and closely related to economic indicators. However, emergent economies with higher rates of GDP growth and increasingly larger expenditures on R&D and healthcare are expected to show a visible escalation in the scientific global picture in the near future.