Impact of drug eluting stents on target vessel revascularization. A report from the Western Denmark heart registry from 2000 to 2004.

Methods and results: From January 2000 to September 2004 data from all PCI procedures in Western Denmark were recorded in the Western Danish Heart Registry.

Conclusion: In unselected PCI patients the TLR rate declined from 2000 to 2004. The use of DES was an independent predictor of TLR.

Until recently restenosis has been a major problem in percutaneous coronary intervention (PCI). The introduction of coronary stents reduced the rate of restenosis1-5 and recent data on drug eluting stents (DES) showed further reduction in target lesion revascularization (TLR)6-9. Most randomized studies comparing bare metal stents (BMS) and DES have been based on angiographic endpoints. Routine angiographic follow-up may increase revascularization rate as some angiographically driven revascularizations are not clinically indicated10-12. At present limited information is available on the need of symptom driven TLR after PCI in unselected patients during the beginning of the DES era. On one hand, the introduction of DES has reduced the rate of TLR, when DES is used in lesions with low or moderate risk of restenosis. On the other hand, it has been a concern that this effect may be alleviated by the change in the PCI population introduced by the availability of DES, as clinicians may be encouraged to a widespread use of DES in patients with complex lesions13,14 and increased comorbidity.

The aim of the present study was to quantify the yearly rate of clinically driven TLR before and after the introduction of DES by analysis of data from the Western Denmark Heart Registry during the 5 year period 2000-2004. Furthermore, we identified predictors for TLR in PCI patients in this period.

PCI was performed according to the standards of the participating centres. Unfractionated heparin was used in a doses of 5.000 to 10.000 U without routine control of the activated clotting time. The post PCI antiplatelet treatment included lifelong acetylsalicylic acid 75-150 mg once daily and clopidogrel loading dose of 300 mg and maintained with 75 mg daily for six to twelve months. Stenting was the preferred treatment in all lesions.

Statistical analysis and calculations were performed using SPSS, version 11.5. Data are presented either as mean±one standard deviation (SD) or percentage of the total number of procedures. Comparison of continuous variables between two groups was carried out using the independent samples t-test, while comparison of the same variable in more than two groups was done by means of variance analyses. Differences between categorical variables were tested with the X2-test. Logistic regression analysis was performed to identify univariate predictors and a subsequent multivariate logistic regression analysis was performed using the forward stepwise method with entry and removal of 0.05 and 0.10 respectively, to identify independent predictors for TLR within 9 months from index PCI. The data are presented as odds ratio (OR) and 95% confidence intervals (CI). For all statistical analysis a value of p<0.05 was considered to be statistically significant. 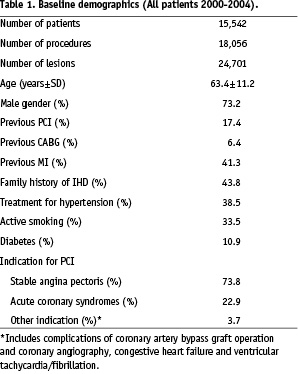 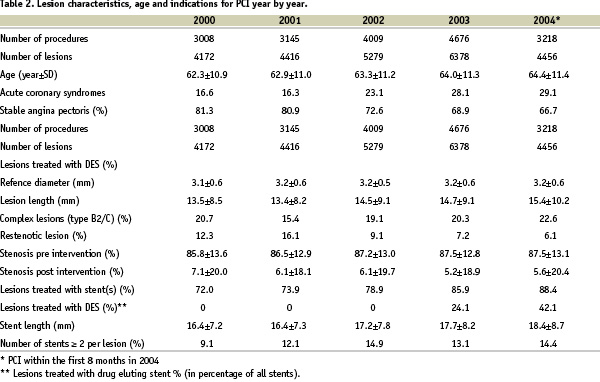 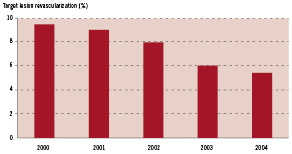 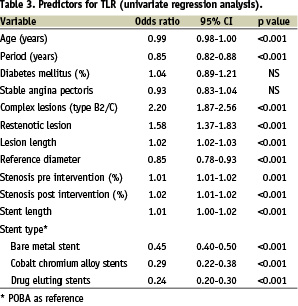 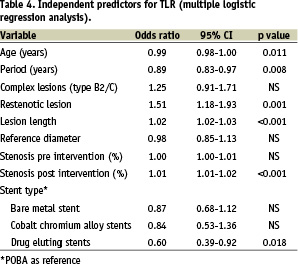 We have previously described declining restenosis rates in unselected patients from 1989 to 19985. In this period the PCI technique changed from POBA to stenting. In the present study we found further declining TLR rates from 2000 to 2004. In this period the drug eluting stent was introduced clinically, and seems, at least in part, to be responsible for the decline.

From 2000 to 2004 the lesions tended to be longer and more complex, and more patients with acute coronary syndromes were treated. Despite the increasing lesion complexity the present study demonstrated a low clinical driven TLR rate during this period. Multivariate analysis of our data indicated a close relation between the use of DES and the observed TLR, whereas the recently introduced cobalt chromium alloy stents, Vision (Guidant) and Driver (Medtronic Ave) were not significantly related to TLR.

Also, the RESEARCH registry compared the use of DES with BMS in unselected patients14. This study showed that an unrestricted utilization of sirolimus-eluting stents in non-selected PCI patients was safe and effective in reducing both repeat revascularization and major adverse cardiac events after one year. In the RESEARCH registry the clinically driven TLR rate (3.7%) in the sirolimus-eluting stent group was comparable to the present study (DES 3.6%), while the BMS group had a higher TLR, 10.9% (Research registry) 6.5% (present study). The two studies differed in some aspects. Thus, 508 consecutive lesions were treated with sirolimus-eluting stents in the RESEARCH Registry and compared to a historical control group of 450 patients who received BMS in the period just before the sirolimus stent period. In the present study DES, BMS and CCS were available. However, DES were primarily used for the subset of patients with a high risk of restenosis. Therefore, a stenting strategy of selective use of DES seems to be rather effective in reducing restenosis rates without using the DES in all lesions.

Recently, a third-generation bare metal cobalt chromium stent was compared to DES in an everyday setting. In this study, DES reduced the rate of major adverse cardiac events by 44%17. However, the increased costs of DES did not completely compensate for reduction of event-related costs. In the present study DES insignificantly reduced the TLR rate (by 16%) as compared to CCS. Therefore, further studies comparing DES and CCS in unselected patients might be advocated.

A number of randomized studies18 with routine angiographic follow-up compared BMS and DES and DES with CCS. The Ravel8,9 and SIRIUS6 studies compared the sirolimus eluting Cypher stent with the BxSonic stent, the TAXUS7 studies compared the paclitaxel eluting Taxus stent with its BMS platform, the Express stent, and the Endeavor II19 study compared Sirolimus analogue coated Endeavor stent with its CCS platform, Driver. As compared to these studies, the present study documented lower TLR rates in the DES groups and much lower in the BMS groups, probably because TLR was clinically driven in the present study, and because of the selective use of BMS in lesion with low restenosis risk.

DES has been associated with excellent outcome concerning restenosis in diabetic patients20. We observed similar TLR rates in diabetics and non-diabetic. This interesting observation suggests that also a selective use of DES in an unselected diabetic population is an effective treatment strategy.

The present study has limitations as it is a register and not a randomised study. Further, stent selection was based on lesion characteristics as vessel size, lesion length, restenosis lesion complexity and patient characteristics as age and diabetes. Also, the might be a selection bias by individual operators and centres. However, the number of patients is large and the study represents the daily routine PCI treatment.

Our registry data showed decreasing TLR rates at the beginning of the DES era. The selective use of DES seemed to be responsible for this positive development with low TLR rates in diabetic and non-diabetic patients.