Conclusions: The use of both the SES and PES in the treatment of chronic total coronary occlusions reduces the need for target vessel revascularization compared to bare metal stents.

Successful percutaneous therapy of chronic total occlusions (CTOs) has been shown to improve symptoms of angina and left ventricular function, and reduce the subsequent need for coronary artery bypass surgery1-5. In addition, in the long-term, recanalization of a CTO can reduce mortality compared with those with an unsuccessful attempt at recanalization6. However, the long-term outcome of percutaneous coronary intervention (PCI) for chronic total coronary occlusions is subject to an increased risk of restenosis and re-occlusion compared with non-occlusive lesions1,7. The advent of drug-eluting stents is revolutionising the practice of interventional cardiology. Several randomized trials have demonstrated a dramatic reduction in restenosis rates compared with bare metal stents when used for the treatment of relatively simple lesions8-11. In addition, preliminary data has confirmed the efficacy utilizing the sirolimus-eluting stent (SES) for the treatment of chronic total occlusions12. In the present report, we evaluate the use of drug-eluting stent implantation for chronic total occlusions in a consecutive series of patients, with comparison between the sirolimus- and paclitaxel-eluting stents.

The sirolimus-eluting stent (Cypher™, Johnson & Johnson - Cordis unit) received CE mark approval in April 2002. Since that time, all patients undergoing percutaneous therapy in our institution have been treated with drug-eluting stent implantation as the default strategy. During the first quarter of 2003, our strategy switched from the sirolimus- to the paclitaxel-eluting stent (Boston Scientific) enabling a comparison of the two stent types. All consecutive patients with successful chronic occlusion recanalization were enrolled. Those patients treated with drug-eluting stent implantation were compared to all those treated for a CTO in the preceding 6-months with bare metal stents (BMS), identified from the departments’ dedicated database. All groups were treated by the same operators utilizing standard techniques; the only difference being the type of stent.

During the procedure, heparin was given to maintain an activated clotting time ≥ 250 seconds. All patients received lifelong aspirin, and before the procedure were pre-treated with a loading dose of 300mg clopidogrel, additional anti-platelet therapy was given with clopidogrel for 1 month in the BMS group, and for 6-months in the drug-eluting stent groups. The use of Glycoprotein IIb/IIIa inhibitor therapy was at the discretion of the operator and was only given once wire passage was confirmed as successful. The protocol was approved by the local ethics committee and is in accordance with the principles of Good Clinical Practice for Trials of Medicinal Products in the European Community and the Declaration of Helsinki. All patients signed a written informed consent

Complete occlusion of a coronary artery on angiography, with no antegrade filling of the distal vessel other than via collaterals. All patients included had a native vessel occlusion estimated to be of at least 3-months’ duration, based on either a history of sudden chest pain, a previous acute myocardial infarction in the same target vessel territory, or the time between the diagnosis made on coronary angiography and PCI.

This was measured by quantitative coronary angiography (CAAS II; Pie Medical Imaging, The Netherlands) either utilizing antegrade filling via collaterals, or assessment of the retrograde collateral filling achieved through making a simultaneous injection into both the left and right coronary arteries to delineate the distance between the site of occlusion and the most proximal part of the vessel filled retrogradely. This length evaluated only the occluded vessel, and did not therefore include stenosis of the vessel pre- and post- the occlusion.

Patients were prospectively followed-up for clinical events, and evaluated for survival-free of major adverse cardiac events (MACE) using questionnaires and telephone enquiries. MACE was pre-defined as: 1) death, 2) non-fatal myocardial infarction (AMI), or 3) repeat target vessel revascularization (TVR). The diagnosis of AMI required an elevation of creatine kinase to twice the upper limit of normal, together with a rise in creatine kinase-MB fraction. TVR was defined as either surgical or percutaneous reintervention driven by significant (>50%) luminal narrowing within the treated vessel, and was undertaken in the presence of either anginal symptoms or objective evidence of ischemia. Follow-up angiography was undertaken in all patients in the presence of anginal symptoms at clinical evaluation; in addition those patients treated during the first 6-months of DES implantation were invited.

Discrete variables are presented as percentages and compared with Pearson’s chi-square test. Continuous variables are expressed as mean ± standard deviation and compared with one-way ANOVA. Cumulative survival and MACE-free survival were calculated according to the Kaplan-Meier method. The log-rank test was used to compare MACE-free survival between the groups. A p value of <0.05 was considered as significant.

There were no significant differences between the groups with respect to baseline patient characteristics (table 1). Procedural characteristics are presented in table 2. One patient in both the BMS and PES groups had stent implantation in 2 chronic occlusions. Occlusion length was able to be measured in 74.1%, 84.2%, and 72.4%of the BMS, SES, and PES groups respectively (p=0.3). Both drug-eluting stent cohorts were treated with a higher number of stents resulting in a longer length of stented segment. 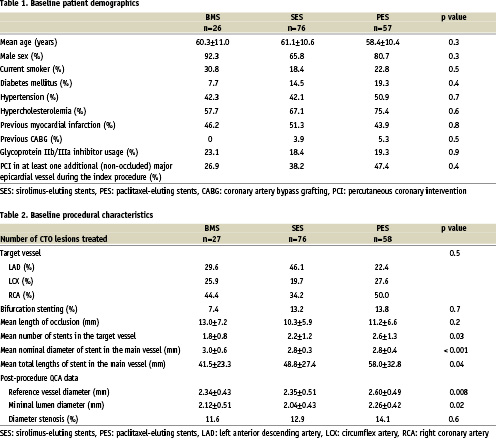 At one year, there was a single death occurring in hospital, 22 days after successful RCA recanalization and PES implantation. The patient had been admitted 1 week previously, with no evidence of a cardiac problem, and the cause of death was related to an inoperable glioblastoma. There were 4 patients who had an acute myocardial infarction, all having been treated with drug-eluting stent implantation. The first had SES implantation for a RCA CTO together with PCI of the LAD. There was a peri-procedural elevation of creatine kinase (maximum elevation of 854 IU/l) related to loss of a sizeable septal branch related to the LAD stent (non-occluded vessel). The second related to subacute thrombosis occurring 11 days after SES implantation (a 2.5x33mm and a 3.0x33mm) in a LAD occlusion. IVUS suggested that 2.5mm stent was under-expanded and the patient was treated with a glycoprotein IIb/IIIa inhibitor and balloon dilatation. The third had PES implantation for a RCA CTO together with treatment of the left main stem. On day 14, he complained of chest pains and had a maximum CK elevation of 819. Angiography demonstrated an excellent result in the RCA, but haziness of the ostium of the left circumflex artery which was subsequently treated with further PCI (culprit lesion in other vessel). The fourth patient had SES implantation (a 2.5x33mm and a 3.0x33mm) for a LAD CTO. At 6-months, control angiography demonstrated no evidence of restenosis, but he was admitted 4 months later to another hospital with a myocardial infarction that was managed medically. 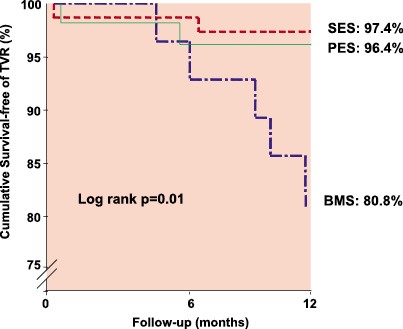 In the present report we have demonstrated the efficacy of drug-eluting stent implantation for the percutaneous treatment of chronic total occlusions when compared to bare metal stents. In addition, we have shown that both the sirolimus- and paclitaxel-eluting stent are associated with a low rate of target vessel revascularization at 6 months.

There have been several randomized trials that have demonstrated the efficacy of stent implantation over balloon-only angioplasty for the percutaneous treatment of CTOs, reducing the 6-month restenosis rate from 68-74% to 32-55%13-17. Initial randomized studies of drug-eluting stent implantation, demonstrated efficacy in reducing restenosis compared to conventional stent implantation, but excluded patients with CTOs8-11. However, recent preliminary data from our own group have shown that the efficacy of the SES is applicable in the treatment of CTOs (defined as >1 months’ duration), with a one year cumulative survival-free of major adverse cardiac events of 96.4%12. In the present study, we evaluate a larger series of consecutive patients treated for a truly chronic total occlusion (>3 months in duration) with drug-eluting stent implantation. We have shown that both the SES and PES significantly reduce the need for TVR, with a cumulative survival-free of TVR of 80.8% in the BMS group versus 97.4% and 96.4% in the SES and PES groups respectively (p=0.01) Figure 1.

Importantly, there were no significant differences in baseline demographics between the groups, and all procedures were carried out in the same centre by the same operators. Restenosis following BMS implantation is known to be inversely related to the post-procedural MLD and the number of stents utilized18. In the current study, the mean nominal diameter of stent used was significantly greater in the BMS cohort, related to a maximum available SES and PES diameter of 3.0mm and 3.5mm respectively. In addition, despite utilizing a greater number of stents, both the SES and PES demonstrated efficacy over the BMS. Furthermore, the beneficial effect of the SES occurred despite a smaller post-procedural MLD.

All major adverse cardiac events in the BMS group related to the need for TVR, including 1 patient who required coronary artery bypass surgery. Within the drug-eluting stent groups there were 5 additional non-TVR events. One patient had a subacute thrombosis, but this might have been avoidable with evidence from IVUS demonstrating a possible underlying mechanism of inadequate stent expansion. In addition, there is good evidence in a further 3 of these cases that the event was unrelated to treatment of the occluded vessel. One patient died of non-cardiac causes, and 2 of the myocardial infarctions were thought to be related to intervention carried out in another (non-occluded) vessel. The fifth patient presented with an AMI in the territory of the target vessel, 4 months after control angiography demonstrated patent stents. Clopidogrel medication had been stopped at the time of the follow-up angiogram, such that the patient was on aspirin therapy alone. The duration of dual anti-platelet therapy needed to reduce / abolish the risk of late stent thrombosis in patients treated with DES, particularly for complex disease, is still unclear. Recently, Ong et al. reported on late (>30 days) stent thrombosis following DES implantation in a consecutive cohort of >2000 patients, they found a low incidence of 0.35% (95% confidence limits 0.17% to 0.72%)19. Importantly, there were no episodes in patients continuing on dual anti-platelet therapy. However, whether there is a true benefit in continuing clopidogrel in addition to aspirin, over and above the possible disadvantages, requires further large scale evaluation.

In patients with significant coronary artery disease, although a CTO is found in at least one third, the majority are treated with either medical therapy or are referred for coronary artery bypass surgery, with percutaneous treatment of CTOs accounting for only 10-15% PCI procedures20. The major limitation of PCI for CTOs is the inability to cross the lesion with a wire, however great advancements have been made in the manufacture of specialized wires, and there are additionally, promising novel technologies such as the Intraluminal™ wire and Frontrunner catheter21-23. The current report has demonstrated the efficacy of drug-eluting stent implantation in CTOs and, together with improvements in recanalization rates, a strategy of percutaneous therapy of CTOs will become more widely applicable.

The study was not randomized, and angiographic follow-up data was not routinely obtained in all patients, so additional events such as silent re-occlusion cannot be excluded. However, clinical follow-up was obtained in >99% patients (all but one patient), and assessment of symptomatic status in those that did not require re-intervention, showed that all were symptomatically well at follow-up. The study was not randomized, and used a retrospective comparative population; however the same operators and interventional techniques were utilised.