Polytetrafluoroethylene-covered stents (PCS) were recently proposed as a new modality mainly for the treatment of saphenous vein graft lesions, but restenosis occurring principally at the edges restricted their clinical use in the management of coronary aneurysms and perforations.

Aims: To investigate the safety and effectiveness of the overlapping implantation of drug-eluting stents (DES) with PCS in clinical scenarios where the latter are indicated.

Methods: Since April 2002, when DES were introduced in clinical practice, 14 consecutive patients were treated with overlapping implantation of PCS with DES in 3 centres. Seven patients were treated for coronary aneurysms, 5 for coronary perforations and 2 for branch occlusion. The incidence of any major adverse cardiac events defined as death, myocardial infarction (MI), and target vessel revascularisation (TVR) was retrospectively evaluated. A control angiography was available in 13 patients, and quantitative coronary angiography was performed before and after the intervention and at follow-up to evaluate restenosis rate and late loss.

Conclusion: Overlapping implantation of PCS with DES seems to be a safe and effective therapeutic modality demonstrating a low incidence of clinical and angiographic restenosis.

Stents covered by autologous venous grafts were first introduced for the treatment of thrombus containing lesions1. Further to that the polytetrafluoroethylene-covered stents (PCS) were developed and proposed mainly for treating saphenous vein graft (SVG) lesions2-4. It was suggested that they would minimise vascular injury, and reduce the proliferative response and tissue prolapse thus contributing to reduced neointimal proliferation and restenosis5. However, restenosis principally at the stent edges prevented their widespread use6,7. Their clinical application was restricted to the treatment of coronary aneurysms and perforations8,9.

Drug-eluting stents (DES) are superior to bare-metal stents regarding angiographic and clinical indices of restenosis10,11. The safety and effectiveness of the overlapping implantation of DES with PCS in clinical scenarios, where the latter are indicated, is unknown.

We report our experience of the overlapping implantation of PCS and DES in a small series of patients providing clinical and angiographic follow-up.

Since the introduction of DES in April, 2002, 14 patients were treated with overlapping implantation of PCS and DES in three centres. Seven patients were treated for coronary aneurysm isolation, 5 for coronary perforation and 2 for side branch occlusion (one with hypertrophic cardiomyopathy and concomitant coronary artery disease and one for isolation of a left internal mammary artery side branch).

The DES were implanted first in all patients but two and in all cases the DES were extending beyond the PCS edges. High-pressure balloon post-dilatation was performed in all cases. Dual antiplatelet therapy (aspirin 325 mg/day indefinitely and clopidogrel 75 mg/day for 3 months in the case of sirolimus-eluting stents and for 6 months in the case of paclitaxel-eluting stents) was prescribed.

Clinical follow-up information about major adverse cardiac events (MACEs), defined as death, Q- and non-Q-wave myocardial infarction (MI) and target vessel revascularisation (TVR), was retrospectively obtained in all patients by means of outpatient visits or telephone contacts. MI was defined as a rise in the creatine kinase level to more than twice the upper normal limit with an increased creatine kinase-MB. TVR was defined as a reintervention in the same epicardial vessel.

A control angiography was available in 13 patients and quantitative coronary angiography (QCA) was performed with a computer-based system (CAAS II, Pie Medical Imaging, The Netherlands) before and after the intervention and at follow-up. Restenosis was defined as in-stent diameter stenosis >50% at follow-up. Late luminal loss was calculated as the difference between the post-procedural and follow-up minimal luminal diameter. Since in all cases the DES completely covered the PCS, the in-stent segment was defined as the segment covered by the DES. There was no reason for sub-segmental analysis involving only the PCS because it was apparent, by initial visual assessment, that there was no hyperplastic response within the stented segment.

The baseline demographic, angiographic and procedural characteristics of the patients are summarised in Tables 1 and 2. 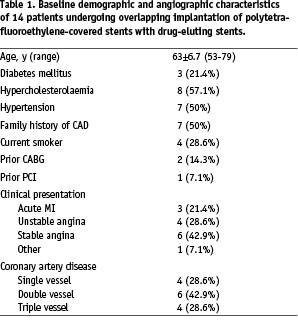 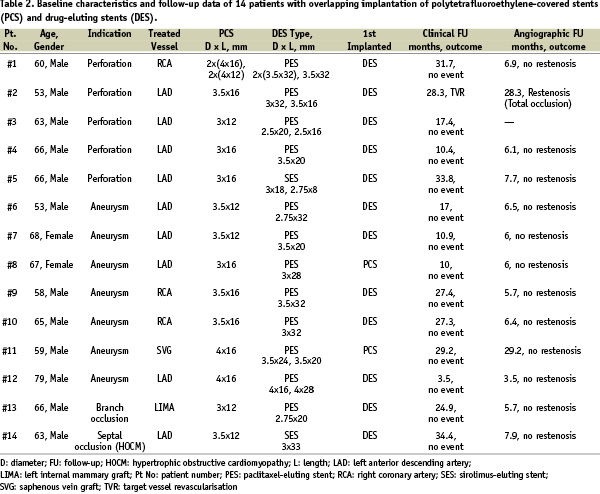 The mean clinical follow-up was 21.9±10.1 months (range 3.5-34.4 months). There were no deaths or MIs. One patient (7.7%) with occlusive restenosis underwent successful TVR 28 months after the index procedure. There was also one patient suffering from recurrent angina related to progression of disease in a non-treated vessel, who underwent a non-TVR at 7 months post-procedure; the initially treated vessel was open without restenosis.

The mean angiographic follow up was 9.7 ± 8.5 months (range 3.5-29.2 months). Restenosis occurred in one patient (7.7%), who was found to have a totally occluded vessel. In-stent QCA analysis in all 13 patients is presented in Table 3. 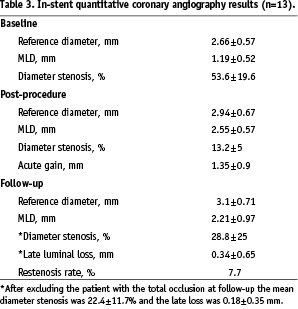 The current study reports on the clinical and angiographic follow-up in a series of patients undergoing percutaneous coronary intervention with overlapping implantation of PCS with DES. The findings demonstrate that this interventional strategy has an optimal procedural success rate and very satisfactory short-term clinical and angiographic results.

Polytetrafluoethylene-covered stents emerged as an effective alternative to the more tedious implantation of stents covered with autologous venous grafts for treating thrombus laden lesions with high restenotic risk, such as SVGs, and managing coronary arterial wall deformations acutely in cases of perforations or electively in cases of aneurysms. However, PCS did not succeed in entrapping friable-degenerated atherothrombotic material against the wall and reducing restenosis in diseased SVGs (pooled results of 6-month binary restenosis rate: 32.3% for PCS vs. 25.9% for bare stents)12. Moreover, in some studies they were associated with a higher incidence of major adverse cardiac events (23.1% vs. 15.9%)13 and late occlusion rate (16% vs. 7%)14 compared to bare stents.

The overlapping implantation of PCS with DES was proven to be safe and effective in the current investigation, since the MACE and angiographic restenosis rate was low (7.7%). This rate is lower than the previously reported 6-month restenosis rates (31.6% for various lesions6, 7% to 31% for SVG lesions13-15) regarding stand alone PCS implantation, which were mainly attributed to edge restenosis (29.8% stent edge vs. 8.8% stent centre)6. Furthermore, the late luminal loss of 0.18 mm in our study is comparable to that observed with DES implantation (0.12 mm for sirolimus-eluting stents and 0.25 for paclitaxel-eluting stents at 6 months)16, while a higher late luminal loss has been reported after PCS implantation (approximately 1 mm)13,14. The complete coverage of the PCS by the DES is essential to overcome the major disadvantage of PCS (i.e. edge restenosis) and obtain propitious results (Figure 1).

Figure 1. Pre: An occluded right coronary artery (RCA) in a patient presenting with acute inferior myocardial infarction. A: After restoration of flow with balloon dilatation a large aneurysm in the middle RCA is visible. B: Angiographic result after implantation of a drug-eluting stent (DES: Taxus 3.5x32mm) with complete flow restoration and without residual stenosis. A polytetrafluoroethylene-covered stent (PCS) is placed across the remaining aneurysm. The PCS (arrows) is well within the borders of the DES (arrowheads) as clearly indicated in the insert without contrast. C: Angiographic result after PCS implantation and complete sealing of the aneurysm. D: Control angiographic examination at six months demonstrating complete aneurysm sealing and no restenosis. In B, C and D the arrows indicate the edges of the PCS and the arrowheads those of the DES.

In a case of coronary perforation, where a PCS was implanted in the middle of two DES without overlap, restenosis occurred at the site of the PCS 6 months post-procedure, while the result at the DES site was well preserved (Figure 2). 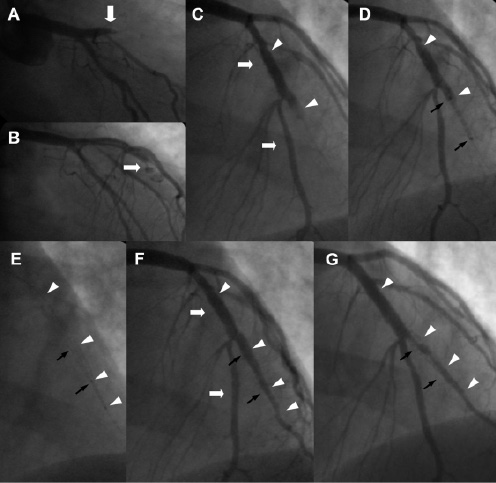 Figure 2. A: Right anterior oblique projection with caudal angulation showing an occluded left anterior descending coronary artery (LAD) after the take-off of the 1st diagonal branch (D1) in a patient presenting with acute anterior myocardial infarction. B: After wire crossing, direct stent implantation (Taxus 3.5x 24mm) resulted in contrast extravasation due to coronary perforation (arrow). C: In the anteroposterior projection with cranial angulation it is indicated that the wire was crossed in the second diagonal branch (D2) and not in the distal LAD and the oversized for that vessel stent caused the perforation. D: A polytetrafluoroethylene-covered stent (PCS: black arrows) was implanted distally to the Taxus (arrowheads) to seal the perforation. E: Due to dissection in the distal edge of the PCS a second Taxus 2.25 x 8mm stent (arrowheads) was implanted distally to the PCS (black arrows). F: Final result after kissing balloon post-dilatations in LAD and D2. The white arrowheads are indicating the edges of the Taxus stents and the black arrows those of the PCS. G: Six-month follow-up angiogram demonstrating significant restenosis (diameter stenosis: 78%) of the non-overlapping PCS (black arrows), while the two paclitaxel eluting stents (arrowheads) remain widely patent.

In all patients but two the DES was implanted first and thus, it was directly apposed to the lumen wall, which is rationale considering that drug elution should be directed to the vessel wall. There are no data available regarding sirolimus or paclitaxel passing through polytetrafluoroethylene membranes. Nevertheless, both patients in whom the PCS was implanted first also had a favourable clinical and angiographic outcome at follow-up. This is an encouraging observation since in clinical scenarios such as coronary perforations PCS may have to be implanted first to treat this life threatening complication.

The variety of indications for overlapping PCS with DES implantation in our patients reveals both its unintentional or bail-out (e.g. perforations) and intentional or elective (e.g. aneurysms) use. On the latter basis, it was also applied to a patient with hypertrophic obstructive cardiomyopathy and concomitant proximal left anterior coronary artery disease following recurrence of the gradient and the symptoms six months after successful alcoholisation. The DES was implanted to treat the significant coronary artery disease and the covered stent to occlude the first septal branch. This treatment resulted in relief of the gradient and the symptoms. This method cannot be proposed as an alternative to alcoholisation in patients with normal coronaries since there are concerns regarding its effectiveness due to septal reperfusion through collaterals leading to treatment failure17, but should be considered as a treatment option especially after initial failure of ethanol-induced myocardial necrosis and concomitant coronary artery disease. Our patient remains asymptomatic and at 8 months angiographic follow-up there was no evidence of collateral formation probably due to myocardial fibrosis and destruction of the microcirculation after the initial achoholisation. In addition, the potential of overlapping DES and PCS could be further explored in selected cases of coronary artery fistulae, which currently require cumbersome interventional management with coils or surgical operation18,19.

The use of PCS for the prevention of restenosis has declined in the era of DES, which have also been used for treating SVG lesions. Initial reports coming from relatively small registries with selected patients and simple short lesions demonstrate that DES are safe and superior to bare stents regarding clinical and angiographic indices of restenosis at 6 months20,21. There are no data regarding more complex lesions and the long-term safety of DES in SVG lesions especially in the light of late stent thrombosis after DES implantation22,23. The encouraging results of our study warrant further investigation on the potential use of overlapping PCS with DES in SVG lesions.

A rational alternative to overlapping implantation of PCS with DES could be the development of covered DES. Some preliminary investigations, however, have not resulted in favourable outcomes. In the SCORE randomised trial, where stents covered with 7-hexanoyltaxol polymer sleeves were used, an unacceptable 10.3% of stent thrombosis rate was observed at one year24. A high MACE rate of 36.4% was also observed after implantation of tacrolimus-eluting covered stents in 20 patients (EVIDENT trial)25. Therefore, the development of an efficacious covered DES may be more complex than a conventional DES, but this possibility should be further explored.

The overlapping implantation of PCS with DES seems to be a clinically safe and effective therapeutic modality demonstrating a low incidence of clinical and angiographic restenosis.