Medical device regulation in Europe – what is changing and how can I become more involved?

The regulation of medical devices, particularly those that are implantable or high-risk, has received much attention in the lay media of late. Most recently, the release of analyses from a collaboration of international journalists in November 2018 made front-page news around the world. In many countries, authorities and physicians seemed to be caught on the wrong foot and put in a position of reaction rather than action. However, in Europe, reform of the medical device regulatory processes has been ongoing for a number of years. As cardiology devices are among the most frequent high-risk devices in clinical use, our community is affected more than other specialties. Indeed, among professional societies, the European Society of Cardiology has taken the lead in advocating for improved regulation for much of the last decade1,2.

Medical devices have been regulated in a coordinated fashion throughout Europe since the 1990s. At that time, the first Europe-wide medical device directives (MDD) were published in 1990 and 19933,4. Over the past decade, a number of scandals emerged regarding patients harmed as a result of treatment with approved medical devices. These included the Poly Implant Prothèse (PIP) breast implant scandal, controversy with regard to metal on metal hip replacements, and complications after vaginal mesh implantation. Although the PIP breast implant scandal appeared to be more a case of fraud than a failure of approval processes, the notified body responsible for the conformity assessment of the product was found liable for damages due to failures in monitoring of the manufacturer5.

At the same time, the first steps were taken to overhaul device regulatory processes in Europe in the realisation that the MDD had become outdated. The overall goal of the initiative is to improve the clinical safety of medical devices on the market in Europe and to increase the credibility and reputation of the oversight system. These processes culminated in the publication of the new medical device regulation (MDR) in May 20176. In parallel, a separate regulation was published dealing with in vitro diagnostics. Regulations, unlike directives, immediately become law in all member states. Currently, we are in the middle of a transition period of three years, which permits devices to be evaluated under either MDD or MDR; this will come to an end in May 2020. After this time point, all medical devices must be approved according to MDR processes. Certificates of devices already on the market – known as legacy devices – will remain valid for a further four years until May 2024.

Figure 1. Key features of new regulations related to medical devices and in vitro diagnostics. Reproduced with permission of the European Commission. 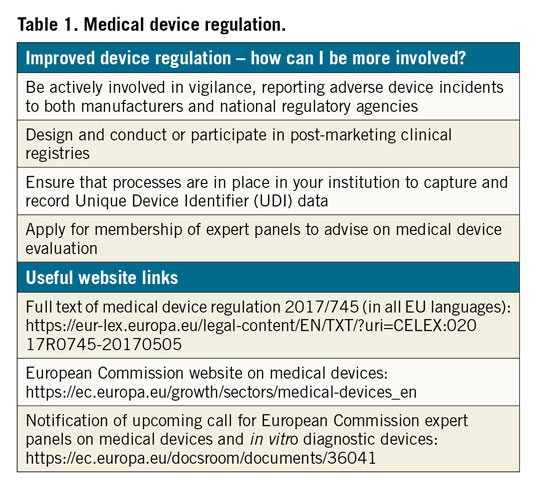 New features of the regulatory system

Historically, devices in Europe are not approved but rather receive a conformity assessment by notified bodies, which, if passed, leads to a CE mark being issued. In conformity assessment, the bar to be reached has been “safety and performance as intended”. This differs importantly from “safety and effectiveness”, which has been the standard requirement in some other jurisdictions. Under MDR, the requirements for approval of high-risk devices in terms of clinical evidence will become greater. This is a development that will be welcomed by most patients and physicians. The new MDR states that high-risk devices should show evidence of “clinical benefit”, which seems to be an important raising of the bar. The type of clinical evidence that will be required for approval of devices will be defined by a regulators’ implementation working group, which receives input from various stakeholders, including the ESC. At the same time, we as physicians are keen to see that our patients retain access to innovative devices as rapidly as possible, particularly in areas where a clear unmet need for devices exists. The impact of the changes in MDR on access to new devices will first become apparent in the years to come. While no separate breakthrough pathway is planned for innovative devices, it is envisaged that devices serving an unmet clinical need will continue to be available for patients in a timely manner.

The requirements, if a manufacturer wants to seek approval of a new medical device by virtue of demonstrating equivalency to a device already on the market, are being strengthened. This will make it less easy for “me too” devices to gain approval on the back of data from other devices. However, it should not mitigate against breakthrough devices. In addition, the submission of data gathered from compassionate use programmes will be made more difficult. In certain cases, this has been perceived to have been used as a back door to to obtaining evaluation by a notified body, circumventing more stringent clinical investigations.

A second important development relates to improving transparency7. In the past, it was difficult to gain access to the information that led a notified body to issue a certificate of conformity for a device. Under the MDR, the manufacturer must publish a summary of safety and clinical performance (SSCP) for high-risk devices and keep this updated on an annual basis. SSCP documents will be available on the European Union database of medical devices (EUDAMED). This database, which previously had been accessible only to regulators, will now be accessible publicly and is a critical element of the new system. The implementation work on EUDAMED, however, is progressing slowly, and it is unclear whether the public clinical interface will be ready for May 2020.

Thirdly, in terms of accountability, each medical device must be identifiable through a unique device identifier (UDI) system. Hospitals must ensure that processes are in place to record the UDI of each device used, in order to facilitate rapid identification of affected patients in case of problems that are identified post marketing. In addition, all patients must be issued with device passes, detailing the devices that they received. In many countries, these changes have already been implemented in full.

Fourthly, post-market surveillance requirements will be increased. This recognises that the medical device product lifecycle is not complete at the time of approval or conformity assessment. Under MDR, manufacturers have increased responsibility to collect post-marketing clinical follow-up data and publish any findings in a periodic safety update report. In parallel, robust vigilance procedures should be in place to enable collection and adjudication of adverse device events in clinical practice. In relation to both of these processes, physicians in general, and cardiologists in particular, have a critical role. We must ensure, as a community, that adverse device events with high-risk devices are reported to both manufacturers and regulatory agencies. Even incidents which seem relatively minor may have increased importance when aggregated with other reports. In addition, physicians have an important duty to design and conduct, or participate in clinical registries. Such registries are capable of identifying important adverse safety signals, as was the case with bioresorbable scaffolds. While early randomised clinical trials failed to detect a signal of adverse safety8, a number of investigator-initiated registries highlighted the issue of scaffold thrombosis9,10, which was subsequently confirmed in larger-scale clinical trials1. While the MDR is clear in laying the responsibility for post-market surveillance at the feet of the manufacturers, as physicians we must appreciate the potentially important role of industry independent data capture and analysis12.

As discussed already, physicians have a central role to play in post-market surveillance, through participation in vigilance and in post-market clinical registries. In addition, physicians will also contribute to pre-market evaluation in certain circumstances. This may be through participation in clinical trials designed to generate data for device approval. Alternatively, it may take the form of participation in so-called expert panels, which will be introduced shortly under MDR. These new panels will review dossiers of documents produced by notified bodies for the evaluation of particular high-risk devices (known as clinical evaluation assessment reports), and decide whether additional investigation is necessary or not. The European Commission will publish a call later this year for experts willing to provide advice on expert panels. The burden of work is not inconsiderable and may be up to two days per month; reimbursement by the Commission is foreseen. The criteria for involvement as an expert will be published with the call and will include requirements related to clinical experience and potential conflicts of interest resolution.

The new MDR represents an important landmark in the regulation of medical devices in Europe. Many of the new features promise to deliver improved safety for patients treated with high-risk or implantable devices. On the other hand, concern exists regarding how the regulation will be implemented, with particular key infrastructure projects, such as the EUDAMED database, still to be delivered upon. What is sure is that there will be an increasing role for physician engagement. Although all medical specialties will be affected to some degree or another, cardiology is likely to be most fully impacted, particularly interventional cardiology. For this reason, we have a duty to be well informed about the changes that are taking place and to engage as much as possible with the new regulation.

Comparison of cardiac computed tomography angiography and transoesophageal echocardiography for device surveillance after left atrial appendage closure. What we see depends on where we are looking from and what we are looking for