Large landmark trials (NASCET, ECST, ACAS and ACST)1-4 firmly established the indications for carotid endarterectomy (CEA) in patients with symptomatic stenosis of > 50%, and asymptomatic stenosis of > 60%. Single- and multicentre randomised trials (CAVATAS, Kentucky study, Leicester study, Wallstent study, SAPPHIRE), and two recently published multicentre trials (SPACE and EVA-3S), have directly compared CEA to carotid artery stenting (CAS), and have generated widespread debate with conflicting results. At this juncture, acknowledgement of the hard work performed by these investigators, critical analysis of trial methodology, and reassessment of the utility of CAS is appropriate.

CAVATAS randomised 504 patients, 88% of whom were symptomatic, to CEA or carotid angioplasty with and without stenting (26% and 74%, respectively).5 None had embolic protection (EP). Each interventionalist was a radiologist who had training in neuroradiology and angioplasty. Records of experience with angioplasty techniques were reviewed and centres with little skill received assistance from more experienced centres. Thirty-day stroke (defined as with symptoms more than seven days) and death rate was 10% in the endovascular arm and 9.9% in the open surgery group. (Table 1) This trial showed similar outcomes, but room for improvement in both treatment arms.

The single centre Leicester study (including symptomatic patients with severe internal carotid artery stenosis >70%) was stopped after 23 patients had been randomised.7 Only 17 of the randomised patients had received their allocated treatment. The 30-day stroke/death rate was 45.5% in the endovascular group and 0% in the CEA group.

The Kentucky study was a single centre randomised trial.6 The trial comprised a symptomatic arm (104 patients) and an asymptomatic arm (85 patients). In the symptomatic arm of this study, 1 patient died as a consequence of myocardial infarction after CEA. There were no complications in the endovascular arm.

The Wallstent study was another multicentre trial including 219 symptomatic patients with a stenosis of the internal carotid artery of at least 60%.8 The 30-day stroke/death rate was significantly higher in the stented group than those who underwent CEA (12.1% versus 4.5%). Unfortunately only an abstract of this study has been published.

SAPPHIRE randomised 334 patients at high risk for CEA, 29% of whom were symptomatic, to receive CAS with EP or CEA.9 Interventionalists were required to have < 6% peri-procedural stroke/death, and the experience of each interventional physician was a median of 64 cases (range: 20-700). Thirty day stroke/death/ myocardial infarction (the primary endpoint) rate was 5.8% with CAS and 12.6% with CEA. The 30-day stroke/death rate in this trial was 4.8% in the endovascular group and 5.4% in the open surgery group. In the hands of very experienced operators with known complication rates of <6%, non-inferiority of CAS and CEA was demonstrated in patients at high risk for CEA.

SPACE randomised 1200, but analysed 1183 symptomatic patients to CAS or CEA. CAS operators had to show proof of 25 consecutive successful angioplasty or stenting procedures.10 Twenty-seven percent of CAS subjects had EP. Thirty day ischaemic stroke/death rate was 7.6% with CAS and 6.5% with CEA. After an interim analysis, the steering committee stopped the trial considering the absence of further funding. Point estimates were similar between arms; but with 1183 subjects, SPACE failed to prove non-inferiority at the
prespecified delta of 2.5%.

EVA-3S randomised 527 symptomatic patients to CAS or CEA. CEA operators performed at least 25 procedures in the previous year, whereas CAS operators had 1) performed 12 CAS, 2) performed
35 stenting procedures in supra-aortic trunks, including 5 CAS, or 3) been supervised by an experienced tutor.11 The trial was stopped early for futility and safety reasons: 30 day stroke/death rate was 3.9% for CEA vs. 9.6% for CAS. This trial noted a significant difference (P=.003) between CAS with and without EP: 30 day stroke/death rates of 7.7% and 25%, respectively. Despite these limitations, EVA-3S showed symptomatic high grade carotid stenosis in patients at standard risk is better treated by highly experienced CEA operators compared to CAS operators and techniques defined in this trial. 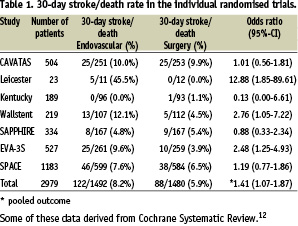 CAS therapy is relatively new compared to CEA and it should be acknowledged that CAS is an evolving technique and dedicated materials became available only recently.

The concept of high risk for CAS is just emerging. Although not a randomised trial, the CAPTURE 3500 registry is the largest database of contemporary CAS procedures with FDA-approved EP and independent neurologic evaluation.13 These larger datasets have power to perform risk-adjusted analysis of patient outcomes. A multivariate model confirmed four independent risk predictors of poor outcome: age > 80 years, symptomatic status, predilation without EP and multiple stents. Experienced CAS operators have published criteria describing patients who are high risk for CAS, including octogenarians, severe tortuosity and calcification-the latter anatomic situations are the same conditions associated with multiple stents or precluding EP.14 Clearly, new knowledge is developing to define patients who are high risk for CAS. It would be tragic if this concept diffuses slower than the application of CAS.

Setacci and Cremonesi have outlined concerns about the recent trials, including lack of routine EP and relative inexperience of the CAS operators compared to CEA operators.15 The latter deserves detailed comment. Within the original EVA-3S manuscript, no significant differences (P=0.54) were reported in 30 day stroke/death in subjects treated by doctors who are experienced interventionalists (10.5%), tutored during training (7.1%), and tutored after training (12.3%). Subset analysis of investigator experience at higher thresholds of CAS experience also failed to reveal a statistically significant difference in EVA-3S (Mas, personal communication). However, subset analysis may suffer from poor statistical power to detect differences in operator experience. Society-endorsed competency statements, including Creager et al, Rosenfield et al, Barr et al and Connors et al16-19, advocate more stringent criteria for CAS operators than was generally practised in some of these trials, although these criteria were established several years after the investigators designed the published trials. Nonetheless, SAPPHIRE and EVA-3S have demonstrated –in opposite directions– the effects of physician experience and patient selection criteria on the trial outcomes.

Naylor has described many of the conflicts inherent in design, funding, completion, analysis, and publication of CEA versus CAS trials.20 Commercial sponsors have supported many of these trials, and investigators may have a dominance of one therapy or the other with intrinsic interest in proving its value. For example, in a rush to discredit EVA-3S, some advocates of CAS have suggested that vascular surgeons insidiously designed and executed the trial to protect CEA. In fact, this trial was led by a neurologist and over 80% of CAS were performed by interventional radiologists and interventional neuroradiologists (personal communications, J.L. Mas and P. Bergeron), contrary to misleading “spin” email blasts from a device manufacturer. The latter activity should be easily recognised.

What are lessons to learn from these multicentre randomised trials? In patients who are high risk for CEA, CAS is an equivalent, maybe even better alternative. In symptomatic patients at standard risk for CEA, CAS has not been proven non-inferior, and is worse when practised by relatively inexperienced operators without EP compared to highly experienced CEA surgeons. For CAS to approach the results of CEA, investigators must apply the new knowledge of factors that make patients higher risk for CAS. This selection to treat high risk for CAS patients with CEA must be done immediately, just as patients at high risk for CEA have rapidly been transitioned to a CAS approach. If CAS operators do not make this transition, many patients will suffer excess stroke risk, and CAS therapy will be cast aside for standard CEA risk indications. Referring physicians and increasingly sophisticated patients rapidly recognise better outcomes in clinical practice.

Given the discrepant results of the published trials and the inadequate power of stopped trials, it is essential that we complete the dedicated, focused work of larger definitive studies, such as CREST, ICSS, ACT 1, and ACST 2. These trials must require similar and substantial prior experience with both procedures with application of appropriate selection criteria prior to enrolment. It is clear that CEA outcomes are several fold different between trials, and advances in preoperative medical therapy, routine patching, systemic heparin, eversion technique, local anaesthetic, etc. are to be incorporated just as advances in CAS techniques and technology, such as routine EP and exclusion of high risk for CAS patients. Alternative trials with less rigorous methodology should be strongly discouraged, as they will divert resources from these critical randomised trials. The next few years are an important period in the evaluation of new therapies for patients with carotid artery stenosis.