Aims: The risk of stent thrombosis has been reported to increase with percutaneous coronary intervention (PCI) complexity. The present study reports the pre-specified secondary endpoint of a 14-month stent thrombosis and major adverse cardiac events in patients stented with a simple versus a complex bifurcation technique using sirolimus eluting stents (SES).

Methods and results: A total of 413 patients with a coronary bifurcation lesion were randomised to a simple treatment strategy; stenting of main vessel and optional stenting of side branch (MV group), or to a complex stenting strategy; stenting of both main vessel and side branch (MV+SB group). Mortality data were available in all patients and 14-month clinical follow-up data in 395 (96%) of the patients. After 14 months, the rates of definite, probable and possible stent thrombosis (ARC criteria) were 1.0% vs. 0.5%, 1.0% vs. 0% and 0.5% vs. 0% (ns) in the MV and in the MV+SB groups, respectively. Rates of MACE were 9.5% in the MV group and 8.2% in the MV+SB group (ns). Total death was seen in 2.4% vs. 1.0% and non-PCI related myocardial infarction in 2.0% vs. 1.0% in the MV and the MV+SB groups, respectively.

Conclusions: After 14 months, two months after recommended cessation of dual antiplatelet therapy, the rates of stent thrombosis and major adverse cardiac events were low and independent of treatment complexity in patients treated with SES for coronary artery bifurcation lesions.

Bifurcation lesions are present in about 15% of percutaneous coronary interventions (PCI)1. Treatment of bifurcation lesions used to be associated with increased risk of vessel closure in the acute phase and restenosis on long-term basis. The use of coronary bare metal stents and later drug eluting stents improved the short- and long-term treatment outcome in this complex lesions subset2,3. Thus, the ARTS II study showed similar outcome in sirolimus eluting stent (SES) treated bifurcation and non-bifurcation lesions4. In contrast, other studies have shown increased risk of stent thrombosis in bifurcation lesions, and that the risk of stent thrombosis might be related to the complexity of the bifurcation treatment strategy5,6. In the Nordic Bifurcation study we compared a simple; stenting main vessel and optional stenting of side branch (MV), and a complex treatment strategy; stenting of both the main vessel and the side branch (MV+SB), and documented similar and favourable six months clinical and eight months angiographic outcome in both treatment groups7. The present report on the Nordic Bifurcation Study provides 14-month (two months after the recommended maximal clopidogrel treatment period) follow-up data on stent thrombosis and major adverse cardiac event rates. The purpose was to evaluate the medium term follow-up results and safety of dual antiplatelet therapy discontinuation in patients with a coronary artery bifurcation lesion treated with a simple or a complex stenting strategy.

This non-blinded randomised multicentre trial was conducted at 28 cardiology centres in Denmark, Sweden, Finland, Norway and Latvia. From September 2004 to May 2005, a total of 413 patients were enrolled. At 14-month follow-up mortality data were available in 100% and clinical endpoints in 96% (395) of the patients; 199 in the MV and 196 in the MV+SB group. A flow diagram of the study is shown in Figure 1. 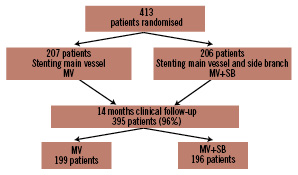 The protocol was approved by ethics committees in all participating countries, and all participating patients gave written informed consent. The primary results of The Nordic Bifurcation Study as well as the study design have been published7. In short, patients with stable, unstable or silent angina pectoris and a de novo coronary bifurcation lesion defined according to Lefevre et al8, were included. Diameter of main vessel should be > 2.5 mm and of side branch > 2.0 mm by visual estimate.

Data on total death, cardiac death, myocardial infarction, target lesion revascularisation, target vessel revascularisation and stent thrombosis were obtained by clinical control visit or telephone contact to the patient. National registries and hospital files were used in case of death or admission to hospital for a suspected cardiac event.

Non-procedure related MI: A rise of biochemical markers exceeding the decision limit of myocardial infarction (99th percentile including < 10% CV) with at least one of the following; 1. ischaemic symptoms; 2. ECG changes indicative of ischaemia (ST segment elevation or depression; 3. development of pathologic Q-wave with, no relation to a PCI procedure.

Stent thrombosis (definite, possible and probable) was defined according to the ARC criteria11.

Differences in categorical variables between the two groups were analysed using the chi-square test or Fisher’s exact test. Continuous variables were analysed using Mann-Whitney test and time to event data using the Kaplan-Meier method and the log-rank test. All p-values were two-sided. Level of significance was 5%. The analysis was performed on an intention to treat basis. All analyses were performed using SPSS 13.0 (SPSS Inc., Chicago, IL, USA).

The study coordinators received an unrestricted grant from the Cordis/a Johnson & Johnson Company. The sponsor had no access to the study data and had no role in the design, conduct or reporting of the study.

The authors have full access to the data and take full responsibility for its integrity. All authors have read and agreed on the manuscript as written. 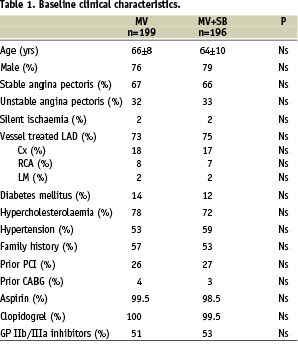 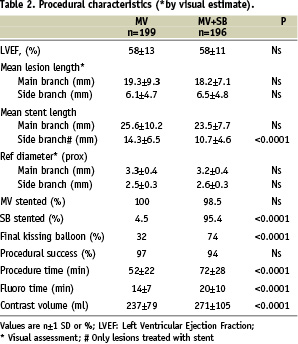 Visual assessed diameter stenosis of >50% in both main vessel and side branch, a genuine bifurcation lesion, was found in 71% of the patients and with similar rates in the two groups. Also, there was no significant difference between the two groups with respect to vessel size or severity of stenosis as assessed by the operator. The lesion characteristics of side branch angulation <70°, vessel calcification and proximal vessel tortuosity were evenly distributed.

At 14 months follow-up, there was no significant difference in the rates of stent thrombosis (Table 3). 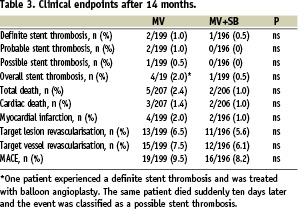 Two patients died suddenly after four and seven days, respectively (by definition probable stent thrombosis). It is likely that one of these patients stopped clopidogrel at discharge from hospital. Final kissing balloon dilatation was performed in four out of these five patients. The duration of clopidogrel treatment was <6 months in 4.4%, six months in 51.0%, 12 months in 33.5% and >12 months on 11.1%. 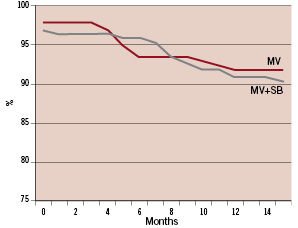 The rates of individual endpoints were low in both groups without significant difference between the groups (Table 3).

In the present randomised clinical interventional trial comparing a simple versus a complex bifurcation stenting strategy, we found no significant difference in cardiac death, myocardial infarction, stent thrombosis, target vessel revascularisation or a combination of those at the 14-month follow-up, two months after the maximal recommended clopidogrel treatment time. Moreover, there was no clear relation between discontinuation of clopidogrel and stent thrombosis.

In interventional cardiology, bifurcations represent a challenging coronary lesion subset. Balloon angioplasty was associated with poor result in the acute phase and implantation of bare metal stents with high rates of restenosis, especially if two stents were implanted3. Treatment with drug eluting stents (DES) gave rise to optimistic reports on low rates of acute events and minimal problems with restenosis12,13. Later, a high rate of stent thrombosis was reported in these lesions, and seemed to be associated with treatment complexity. Further, outcome in bifurcation was found to be related to a finalising kissing balloon dilatation14,15.

This study had an open design; thus operators and patients were aware of the technique used. Primary and secondary endpoints, however, were adjudicated by a blinded event committee and should not be influenced by the open design of the study. The patients studied had a variety of bifurcation lesion types and lesion locations, but a bias towards higher inclusion rates of lesions with small side branches cannot be totally excluded. Therefore, the overall recommendation from the study may not be valid for specific subsets of lesions. Still, 71% of the patients were treated for a genuine bifurcation lesion, i.e., lesions with more than 50% stenosis located both in main vessel and side branch. Finally, a follow-up period of 14 months may be too short to give a definite answer to the possible long term safety problems in SES treatment of coronary bifurcations.

At 14 months follow-up, two months after scheduled discontinuation of double antiplatelet therapy, MACE and stent thrombosis rates were low, indicating an excellent safety profile for both the simple and the complex stenting strategy using SES in coronary bifurcation lesions.

Data monitoring and safety: Members of the steering committee.