Methods and results: At our institution, the therapeutic approach for all patients with multi-vessel disease is decided, by consensus at a conjoint session with the clinical cardiologist, interventionalist and cardiothoracic surgeon enabling unequivocal identification of patients, refused surgery, who were referred for PCI. The EuroSCORE was used to predict peri-operative mortality. From April 2002 to December 2003 we identified 84 such patients. The mean age was 70.9±10.1 years and 68% were men. More than one third had prior CABG. Most patients presented with stable or unstable angina pectoris. The reasons for refusal for CABG were: unsuitable coronary anatomy (37%), poor functional status (28%), patent grafts other than the culprit vessel (25%), prior CABG (28%), severe left ventricular dysfunction (13%), co-existing malignancy (18%), prior disabling stroke (12%) and morbid obesity (11%). Using the standard and logistic EuroSCORE methods, the predicted in-hospital mortality rates were 7.8±3.3% and 13.2±11.1% respectively. In this study, the actual mortality rate was 1.2% at 30 days, 3.6% at 6 months and 4.8% at 1 year follow-up.

Conclusions: PCI in high risk patients who were refused for CABG in the DES-era resulted in an early and 1-year mortality rate that was significantly lower than the predicted operative mortality.

Percutaneous coronary intervention (PCI) has evolved to become the preferred alternative to coronary artery bypass grafting (CABG) in many lesion/patient subsets1 and the advent of drug eluting stents (DES), which dramatically reduce the need for reintervention2, may soon extend these indications to patients with more complex or extensive lesions in whom CABG has traditionally been the recommended approach3-7.

Given the less invasive nature of percutaneous intervention, it is often used as a “bailout” procedure in patients, in whom the site or extent of the vascular lesions would normally be considered an indication for surgery, but who are judged to have a prohibitively high risk of adverse outcomes with CABG because of cardiac or extracardiac comorbidities.

The Angina With Extremely Serious Operative Mortality Evaluation (AWESOME) trial compared CABG with PCI in patients at high risk for CABG with medically refractory ischemia; bare stents were implanted in 54% of patients; the authors concluded that PCI was a safe alternative to CABG with comparable survival, but a higher rate of reintervention in the PCI group8,9. We evaluated procedural and 1-year outcome in patients in whom CABG was not considered an option for revascularization, based on a consensus decision of the referring cardiologist, interventionalist and cardiothoracic surgeon, who were subsequently treated with PCI with a DES as the default stent. The expected in-hospital mortality rate was calculated with both the standard and logistic EuroSCORE, a validated surgical outcome tool and compared with the observed mortality10-15.

Our institutional policy requires that the revascularization strategy, for patients referred to our center, for elective treatment of multi-vessel coronary artery disease be decided, by consensus at a multidisciplinary case conference, where the referring cardiologist, an interventional cardiologists and a cardiothoracic surgeon are present. For emergent referrals, a similar strategy is applied on an ad-hoc basis in the catheterization laboratory.

The study population comprised consecutive patients treated between April 2002 and December 2003, by percutaneous coronary intervention, after a consensus decision, that surgical intervention (or re-intervention) carried an unacceptably high risk.

The EuroSCORE, a validated tool to assess surgical risk, was used to obtain an objective assessment of the expected post-operative mortality in the group10,13,15. Both the standard and the logistic score were calculated11,12,14.

Clinical follow-up was obtained for all patients. Clinical endpoints were all-cause mortality and major adverse cardiac events (MACE), defined as a composite of death, myocardial infarction and target vessel revascularization (TVR) at one year. Survival status was obtained from the the Municipal Civil Registries at 6 months and 1 year post-procedure. Myocardial infarction was defined as a rise in creatinine kinase-MB fraction more than 3 times the upper limit of normal; TVR was defined as any re-intervention within the stented vessel. Myocardial infarctions and re-interventions were prospectively recorded on our institutional database. Surviving patients received a health questionnaire at 6 months and one year. Further clinical information was obtained from the referring cardiologist or general practitioners, where required.

Baseline and procedural characteristics are presented in Tables 1 and 2. The mean age of the patients was 70.9±10.1 years and 68% were men. More than a third (37%) had prior CABG. Glycoprotein IIb/IIla-blockers were used in 24% of patients. Drug-eluting stents were used in 88% of patients; in 15% of the patients bare metal stents were used due to the unavailability of large diameter DES for the treated vessels. The mean number of implanted stents was 2.8±1.8 mm, with a total length of 55.5±37.6 mm. Mean stent diameter was 2.97±0.50 mm.

The reasons for refusal for CABG were: unsuitable coronary anatomy (37%), poor general condition (28%, mostly due to advanced age), patent grafts other than the culprit vessel (25%), prior CABG (28%), severe left ventricular (LV) dysfunction (13%), co-existing malignancy (18%), prior disabling stroke (12%) and morbid obesity ( BMI > 35 kg/m2) (11%). Multiple reasons were present in 62%. The reasons for surgical refusal are detailed in Table 3. 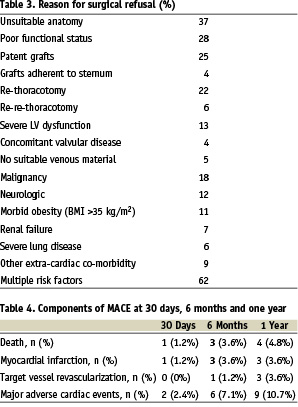 Figure 1. Kaplan-Meier curve for cumulative all cause mortality plot for patients refused for CABG; the dotted line indicates the peri-operative mortality derived from the standard Euroscore. 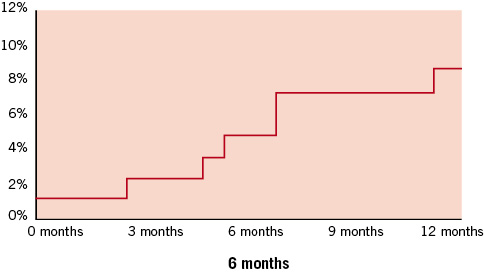 The randomized controlled trials that compared PCI with CABG or that compared bare metal stents with DES excluded patients with high risk features, such as prior CABG, unsuitable anatomy or poor LV function. The AWESOME investigators randomized a subgroup of such patients to PCI or CABG and concluded that PCI was an alternative to CABG, with comparable survival, although the reintervention rate was, as expected, higher in the PCI group8,9. During the study period, stents were used in just over half of the patients. The advent of DES with their dramatic effect on the need for reintervention led us to evaluate outcome in consecutive patients who were refused CABG but were treated in our institution with PCI and default DES use3,4.

The major finding of the study was that PCI in high-risk patients refused CABG and subsequently treated with DES was associated with low periprocedural and 1-year mortality rates, that were significantly lower than the mortality rates predicted by the EuroSCORE method, a validated tool for surgical risk assessment.

In this study unsuitable anatomy, prior CABG, patent grafts and LV dysfunction were the most important cardiac factors for the heart team to decline surgical revascularization in a patient. The extra-cardiac factors were poor functional status, malignancy, neurological disability, morbid obesity, renal failure and chronic obstructive pulmonary disease. Overall, two-thirds of patients had multiple risk factors that precluded CABG.

The major randomised controlled trails comparing PCI with bare stents versus CABG concluded that no statistical differences are observed between CABG and stenting for mortality or acute myocardial infarction, but that CABG is associated with reduced rates of major adverse cardiac events, mostly driven by reduced repeat revascularisation1,16. With the extended use of DES, the rate of repeat revascularisation in our study was very low at 1-year (Table 4); in former studies a major drawback compared with surgery, although the long term results are not yet known in our particular group of patients.

A recent trial randomized patients with carotid stenosis to percutaneous intervention with stent implantation or to surgery showed that the outcome did not differ significantly17. This study had parallel registries documenting outcome in patients, refused for surgery or for percutaneous intervention, who were subsequently treated with either method. Interestingly, the outcome in patients refused for surgery who were treated percutaneously, did not differ significantly from that of the patients who were judged suitable for randomisation. Our study highly suggests that in the DES era, PCI is a reasonable alternative for patients requiring revascularization in whom the risk of adverse outcomes with CABG is judged to be unacceptably high. Further studies are needed to confirm our results, although randomized controlled trials in this group of patients would be difficult, especially if compared with medical therapy.

The present study has several limitations: it is non-randomized, has an observational design and a heterogenous study population. Not all patients were strictly inoperable; i.e. patients with patent grafts to the LAD were not reoperated on at the first instance. Other patients would have been operative candidates, albeit at a much higher risk, if percutaneous treatment was not an option. Although the decision is reached by consensus, it is very operator dependent as the composition of the heart team changes and there are no accepted guidelines. Also, a control group of conservative, medically treated patients were not available.